Home Book Reviews Something Completely Different: My Boyfriend is a Monster #1: I Love Him to Pieces by Evonne Tsang 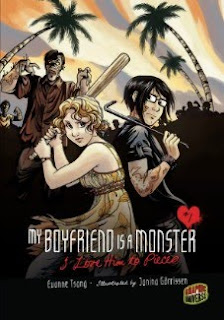 Can love survive the zombie apocalypse?

Maybe Dicey’s first chance at a real relationship was dead from the start. She’s the star of her high school baseball team, and Jack’s the star of the science program. Her idea of a study session includes sleeping in the sun, and his idea of a good game involves dungeons and dice. But opposites start attracting when they’re assigned to be partners in a class project. When an outbreak of a weird infection hits the town – it eats your brains and makes you hungry for the living – it might not mean just the end of their first date. It might mean the end of everything.

Will Dicey and Jack’s relationship fall apart faster than zombies in the Florida sun, or can they beat the odds and find a happy ending?

After three very long YA novels ranging in quality from mediocre to terrible, I decided yesterday that my next reading project would be something fun, light, and different. I immediately hightailed it to my netGalley account, where I’d been saving this little gem for just such an occasion, and I’m very glad I did. My only regret is that this little reprieve couldn’t have lasted longer.

My Boyfriend is a Monster #1: I Love Him to Pieces is short, sweet, and adorable. Not words that usually describe a zombie story in any media, but this is more of a light-hearted zombie romantic comedy than any sort of hardcore horror or action movie, and despite my expectations, I was perfectly okay with that. This book is charming from start to finish, with a great balance of likable characters and snappy, amusing dialog.

The premise isn’t anything too complex – Dicey Bell and Jack Chen are polar opposites paired together to for the dreaded high-school Egg Parenting Project (do they actually still do that anymore)? Dicey is a “jock” (baseball) and Jack is a nerd, but the two give convention the middle finger and get along almost from the start. They eventually fall in love and end up taking on the zombie apocalypse together.

The story actually takes a while to get going, spending a rather surprisingly lengthy amount of time exploring Dicey and Jack’s individual lives (friends, families, and hobbies), and their progression as friends throughout the egg project. We’re on page 54 before they start carting in any of the flesh-eating undead, but I was okay with this, too. Nearly every character in the book is ridiculously easy-going, cheerful, friendly, and cutely funny, and everyone gets along so damn well that it’s difficult to regret an extra thirty pages or so of time with them. Besides, this way you get to give more of a shit about the characters when the flesh-eaters do show up. I was even mildly concerned about Dicey’s teammates and Jack’s nerd buds. Seriously, how often in any zombie flick do you give a shit about like ten of the side characters?

The undead masses take center stage on Dicey and Jack’s first date, which leads to an amusing running joke about the jock/nerd romance unsettling the balance of the universe. Luckily, Jack’s parents are scientists – actually, the very scientists who accidentally developed the plague, but in this bizarre easy-going comic-world, everyone sort of laughs this off – which allows him to provide both a handy explanation for the plague itself and a means of escape, as his parents have sent the government out to fetch him. From there, I Love Him to Pieces is much like any other zombie story, but condensed: Dicey and Jack try to escape with their escorts, but they’re all eventually killed off, and our heroes are left on their own until they run into Jack’s friends. They eventually part ways with them as well, leaving the two to fight – and plow – their way to safety, all the while falling deeper in love.

The book’s light tone could be its saving grace or critical flaw, depending on how you look at it. On the one hand, you never really get a feel for some of the darker emotions like horror, fear, and sorrow, that a zombie apocalypse really should inspire. Every single traumatic event is undermined a little by the characters’ unflappable cheeriness. The few emotional reactions they actually have are fleeting; you’re never horrified because they never are, even when their entire team has been murdered, or Jack has been injured. I’m sure a lot of zombie fans aren’t gonna dig the lack of drama, gory violence, and overall darkness here.

On the other hand, the more flexible or newer fans might actually appreciate the lighter feel. It’s a bit counter-intuitive to come out of a zombie story with an overall reaction of “Awwww…”, but it’s also a nice change. Not every zombie comic has to be High School of the Dead.

Visually, I Love Him to Pieces falls into ‘mediocre’ territory. The character designs are cute, and you can appreciate them a little more in close-ups and tight shots, but the wider ones come off a bit simplistic. The book in general has this strange sort of Archie/manga hybrid feel to it, which may also be a part of what keeps it from ever gaining any sort of dramatic weight.

The storytelling is lovely, though. I was impressed by the way it was able to convey so many of the character’s personalities, histories, and relationships without ever dumping too much exposition on us. Comics can be guilty of Tell-Not-Show, too, but I Love Him to Pieces never had that problem (except for Jack’s random zombie-explanation speech). There’s an especially good sequence meant to illustrate Jack’s loneliness that artist Janina Gorrissen does especially well.

Apparently I Love Him to Pieces is the first in a series of graphic novels under the umbrella title/theme “My Boyfriend is a Monster“. There are three other installments set to come out in the same month (April), and though I’m disappointed to see that they’re by different authors, the quality of the volume one has given me high hopes for the rest.

All in all, I was very satisfied by I Love Him to Pieces, and I think most everyone, zombie fan or not, will be as well. My only real complaint is that it was far too short! At 132 pages, it took about a half-hour to blow through, and I’m back where I started, staring at a pile of soon-to-be-released paranormal romance novels I don’t want to start. SIGH.

Good thing I have another comic galley to read this week!