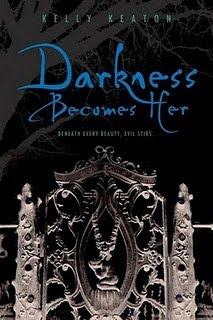 Ari can’t help feeling lost and alone. With teal eyes and freakish silver hair that can’t be changed or destroyed, Ari has always stood out. And after growing up in foster care, she longs for some understanding of where she came from and who she is.

Her search for answers uncovers just one message from her long dead mother: Run. Ari can sense that someone, or something, is getting closer than they should. But it’s impossible to protect herself when she doesn’t know what she’s running from or why she is being pursued.

She knows only one thing: she must return to her birthplace of New 2, the lush rebuilt city of New Orleans. Upon arriving, she discovers that New 2 is very…different. Here, Ari is seemingly normal. But every creature she encounters, no matter how deadly or horrifying, is afraid of her.

Ari won’t stop until she knows why. But some truths are too haunting, too terrifying, to ever be revealed.

I’ll admit: about twenty pages into this book, I was ready to dismiss it as annoying, tired YA crap. You can probably tell why from the summary above – “With teal eyes and freakish silver hair that can’t be changed or destroyed, Ari has always stood out.” Oh God, eye roll. Around the same time this description comes about in the book, we learn that, though initially raised in foster care, Ari has lately been taken in by a husband-wife team of bail bondsmen, who have schooled her in the ways of fighting and gun-wielding. In the same breath, we’re told she also closely associates herself with the moon, and has a platinum moon necklace and a stars-and-moon tattoo on her cheekbone.

Could it be yet another ~*speshul*~ heroine, tough and aloof, who’s had a bad life and doesn’t trust anyone (and isn’t that cool?) with supposedly “freakish” but in fact beautiful traits – both natural and self-inflicted – that ironically ostracize her from the rest society?

Well where have we seen that before? Oh, yeah, only everywhere. I could rattle off ten books that we’ve reviewed in the past year whose protagonists fit most, if not all, of that description, and if I were to think of books I’ve read in my lifetime with characters like that, they’d probably number in the hundreds. And I gotta say, I’m really sick of the ~*speshul snowflake*~ protagonist trope.

I’m sick of all the weird eyes and “freakish” hair and birthmarks that supposedly brand these characters freaks, but are really just ~too beautiful~ or ~cool~ for muggles to deal with. It’s annoying. You want your character to feel isolated from society, fine. You want to make your character unique, that’s fine too, but there are ways to do that that don’t involve ~beautiful eyes~ that are SUCH A BURDEN OH MY GOD WHY CAN’T THEY JUST GO AWAY? You know, like with character development.

Admittedly, this is a pet peeve of mine, but it’s also yet another instance of this creativity stagnation in YA – this same idea that’s been recycled over and over, yet rarely changes or evolves. Not to mention the kind of blatant author wish-fulfillment it represents, that also panders to teenage readers’ desires to declare their own individuality by creating this template character that they can easily imitate, both in appearance and behavior. And there isn’t one word of that paragraph that doesn’t annoy the crap out of me, because it smacks of “gimmick” – something cool that can be reproduced for the cover (though it wasn’t in this case, and I’m very surprised) and marketed.

I’m being pretty hard on the author here, I know, and it seems like a pretty petty thing, but the book makes a huge deal of it. The heroine Ari’s whole quest basically revolves around her desire to rid herself of that damn silver hair and turquoise eyes, with the added bonus of removing a curse that would apparently kill her – and leave a future child orphaned – by age 21. Sure, there are attempts made by the author to give Ari more of a reason to despise her looks – apparently they’ve always attracted the “wrong” sort of attention, and she’s frequently had to fend off rapists her entire life – but what does that say? Pretty girls had better take up arms, because there’s a world of men out there who can’t take no for an answer? Unless, of course, they happen to have ~beautiful eyes~, too.

Point is, it feels cheap – an easy means to any number of ends, in this case crafting a character who a) is beautiful but doesn’t believe it, b) is easily recognizable when the villains come knocking at her door, and c) has serious self-worth and trust issues. This doesn’t mean that this sort of plot device can never work, or hasn’t been done well in the past, but neither applies here. It just comes off as lazy and irritating.

Which is a shame, because despite some pretty major flaws, I ended up finding Darkness Becomes Her pretty interesting. It’s got a bad case of Fantasy Kitchen Sink – we’re talking a world that involves vampires, witches, voodoo priests, shapeshifters and the full international pantheon of mythological gods, goddesses, and demi-gods, most prominently the Greek ones – but Keaton manages to craft this unwieldy mythos into a world that is mostly coherent, and relatively unique. It’s a strange literary mash-up, like a more mature Percy Jackson with a paranormal romance twist and random dystopian touches. But it works. Not completely, but well enough to interest me in the next installment.

However, again, there are some serious issues, even excepting the ~beautiful eyes~. The romance here is weak. WEAAAAAAK. The heroine and her love interest, Sebastian, know each other for all of a few hours before they’re making out and holding hands and are totally ~in love~. What’s worse, they’ve barely spoken up to that point, and the exchanges they have had have left the the heroine with a generally bad impression of him. It’s the usual Slap-Slap, Kiss-Kiss dynamic, but they aren’t even really given time to slap each other properly – Ari literally hates-yet-is-attracted-to-him one moment, faints, then wakes up in his arms to a steamy makeout session the next. Then they’re buds. Christ almighty, are we just totally dispensing with the idea of relationship development now?

And like I mentioned above, the heroine herself is mightily annoying. Ari is, again, the typical wounded-and-weary protagonist, and God is that old. But there’s no depth put into it – there’s not a lot of depth to Ari herself, and that probably comes from Keaton’s show-not-tell method of communicating her character’s feelings. She’s good at describing places, setting a mood, and it’s very easy to visualize New 2 and the specific locations DBH takes place in, but every time Ari’s emotions are mentioned, it goes something like this: “I feel ____”. She ran away, feeling sad. She sat up, feeling angry. She was tired. She was this, she was that. It’s the Achilles heel of Keaton’s writing, and a part of why Ari’s attitude and emotional makeup felt superficial to me.

The other part would be her chattiness. She goes on and on about how she doesn’t trust people and how she feels so alone and outcasted and blah blah blah. She even talks about how the broken-down-but-still-beautiful-and-slightly-wild look of the Garden District of New 2 is like “if someone crawled inside (her) soul and created a place to suit (her) best”. PROTIP: broken-and-wounded people aren’t that chatty about being broken and wounded, unless they’re not really broken-and-wounded, but are in fact big old attention whores. She also talks a lot about being socially inept, and yet we never get a hint of this in the book. She gets along with everyone pretty damn well. It seemed like another case of an author wanting to write a certain type of character, but not having a real good idea of how someone with that type of personality works. Ari frequently did things that were supposed to demonstrate her wounded-and-weary mindset, and yet in most situations, even those felt wrong. A lot of Ari’s actions and the actions of those around her, felt forced and wrong – to perpetuate the suspense, to get in a good action scene, to act as a plot device. There are times when Ari easily accepts a certain concept but probably shouldn’t, and other times where the reverse is true. It was very uneven.

Finally, the story was very, very predictable. We’re told in the first ten pages that Ari’s mother was supposedly schizophrenic and had delusions of snakes coming out of her head. Adding that to the fact that, when she died, her body was taken by “relatives” to be buried in Greece, and you know from the first chapter exactly what Ari is and where this is going. It doesn’t take a rocket scientist, and this seriously lessened the impact when Ari herself has this revelation (almost at the end of the book). There were some added twists that I didn’t see coming (and probably should have), but the core mystery is never as mysterious as it should be.

The ending ties the entire story up in a very neat bow, even providing us with answers to questions I didn’t think were relevant, mostly to set up Ari’s quest for the sequels. The ultimate villain is a wash for me – although it’s an interesting and total switch on the way she’s usually portrayed in books and movies, Keaton takes the portrayal past subversion and in to one-dimensionally evil territory. I’m hoping that there will be some expansion on her character and why she’s the way she is, but as of now, she’s pretty much your typical Evil Queen.

Really, what drew me in here was the story arc, and the way it ties in to the world. The characters are so-so, the heroine is very been-there-done-that, but I feel like Keaton was trying to do something interestingly genre-bending here, and I respect that. I know I’ve spent the majority of this review saying really bad things about it, but you can really see what Keaton’s trying to do, and I think with a few more revisions, this could have been a very good book. So I’m hoping the sequels will smooth out the rougher parts, and I’m curious to see where it goes. I’d definitely read the next one.

So for that, I have to say:

This was another book received as a free ARC from the publisher, Simon & Schuster.