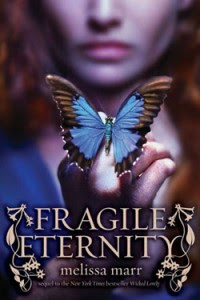 Seth never expected he would want to settle down with anyone—but that was before Aislinn. She is everything he’d ever dreamed of, and he wants to be with her forever. Forever takes on new meaning, though, when your girlfriend is an immortal faery queen.

Aislinn never expected to rule the very creatures who’d always terrified her—but that was before Keenan. He stole her mortality to make her a monarch, and now she faces challenges and enticements beyond any she’d ever imagined.

In Melissa Marr’s third mesmerizing tale of Faerie, Seth and Aislinn struggle to stay true to themselves and each other in a milieu of shadowy rules and shifting allegiances, where old friends become new enemies and one wrong move could plunge the Earth into chaos.

So, we feel that we should start this out by saying that either this book should not have existed, or the out come better be damn good, because it kind of ruined our Ink Exchange buzz.

And how did it do this, you ask? Well, by having every single character become an asshole. Fragile Eternity is all about the messy consequences of what we believed in Wicked Lovely to be a happy ending, and it’s a huge buzzkill.

But we’re getting ahead of ourselves. We’re going to start by talking about Seth, since he seems to be the main character this go ’round.

We really feel like Seth got the least out of the arrangement between Aislinn and Keenan. In fact, he kinda got shafted there. We understand that everyone lost something, but at least they got something in return. Aislinn got immortality, Keenan got his power, and even Donia got the Winter throne. Seth didn’t benefit at all. He lost his girlfriend, and in more ways that one. She’s no longer human, and as a fairy is stronger than him, which bothers him because he can’t protect her. In fact, he’s the one who has to be protected. But worse, he has to vie for her attention, time, and affection with Keenan.

Poor Seth has become Aislinn’s stay at home wife. He really doesn’t have anything in his life except for her. Plus, his only other friend is Niall, so basically his life revolves around the fey world. Frustrated by his help- and uselessness, Seth decides that his only course of action is to find a way to become fey. Unfortunately this totally fucks up the plan Keenan has settled on: to wait out Seth’s mortal life and claim Aislinn’s love at the end of it.

Though Wicked Lovely made it seem as though Keenan was satisfied with their arrangement because it allowed him the freedom to be with his love, Donia, in Fragile Eternity we learn that he is much more resentful of it than we realized. This is due to the fact that without a full-blown relationship between the Summer King and Queen (meaning, requires fucking), their court will not fully flourish, and Keenan can never wield his full power as a monarch. Not only that, but they share a magical bond that pulls them together, interfering in both their respective relationships. This has lead Keenan to the conclusion that his and Aislinn’s union is not only inevitable, but for the best.

The relationships between the four monarchs in Fragile Eternity are both complicated and damaging to all parties, and are a large part of the way this book screws everything up. The bonds that were formed in Ink Exchange and Wicked Lovely are causing far more harm than indifference would have; these people can’t stop hurting each other, and it’s making the alliances between their courts very unstable.

Take Keenan and Donia for example – Keenan begins Fragile Eternity casually seeing Donia while wanting Aislinn, which breaks Donia’s heart, because she wants to come first for him. But about halfway through, Keenan finally begins to respect Aislinn’s desire to see Seth through his mortal life, and resolves to take that time to have a real relationship with Donia. Unfortunately, right after he commits himself to her, Seth goes missing, and Keenan totally drops Donia to comfort his queen. This leads to him and Aislinn getting closer, and eventually begin courting.

Anyway, the point is that Donia’s heart gets broken over and over by Keenan’s indecision, which ends up changing her character somewhat. She slowly becomes more and more like her predecessor – cold and scorned and bitter. She even goes so far as to attack Aislinn when she comes to speak on Keenan’s behalf. WHAT THE HELL? We liked Donia (she was Cyna’s favorite character), and she goes and pulls this shit.

On the other hand, it’s kind of cool to see Marr hinting that this might be how the previous Winter Queen became so evil, and how her relationship with the Summer King collapsed.

Worse yet, the new Dark King Niall is still butthurt about the way Keenan manipulated him and Leslie, so that’s another political alliance down the drain. Niall eventually goes to Donia, and they agree to fight together if one of their Courts ends up in war with Summer, so essentially, Keenan’s fuckery has ended up turning the people who loved him against him.

And then there’s Aislinn…selfish little Aislinn, who doesn’t even realize how her wishes are hurting other people. Seth for instance – what she should have done is just left him human and let him go. He may have been her tie to the human world, but all she was doing by pursuing their relationship was hurting him and taking away his chance at a normal life (which is what she wanted for herself).

Not to mention that this selfish desire to keep Seth also affects Keenan and her court. Keenan is left in limbo, unable to completely be with either Donia or his queen, the two most important people to him. Not that it’s Aislinn’s job to be available for him romantically, goddammit, but her Court is also suffering for it.

This brings us to Fragile Eternity‘s twist ending, and we’re going to discuss it in detail, soooo SPOILER ALERT!

As we previously stated, towards the end of the book, Seth goes missing. Well, not actually missing; Bananach just takes him to Faery without telling anyone. He goes to petition the High Queen Sorcha to make him fae, and ends up staying for thirty days (in Faery time) as part of his contract. Everyone figures this out except for Aislinn, but they all keep it from her because they know that she knew, she’d go try to get him back, and unintentionally start a war. This results in six months of Aislinn thinking Seth has left her, because time runs more quickly in Faery than it does in the real world.

When Seth returns, he is both a powerful fae and the heir to the High Queen’s throne, and is ready to begin a relationship with Aislinn as equals. Unfortunately, Aislinn has spent the preceding six months getting closer to Keenan, and is angry with Seth for being gone so long and not telling her where he was. Their part of the book ends with her throwing Seth out without letting him know exactly where they stand.

In the meantime, Aislinn is pissed at Keenan for watching her go through such misery while Seth was gone, knowing the whole time what had happened to him. Keenan ends up at Donia’s door, crushed that he may have ruined his chances with Aislinn, and Donia turns him away, saying he’d lost them both.

You can see why we’re depressed here. We don’t know how this can be fixed, or how the story can be resolved to our satisfaction. We’ve both decided that we are no longer Team Seth. We think it was stupid for him to become a faery, which really only succeeds in making things awkward for Aislinn and Keenan for, you know, eternity.

Kayla feels that Keenan and Aislinn should just get together, because things are too complicated when they’re not. She doesn’t see any other way it could work out, but she feels that, hopefully, she’s wrong.

Cyna, however, is Team Everyone-Should-Stay-the-Hell-Away-From-Each-Other, because none of these characters seem to be able to live together without breaking each others’ hearts. And every time they piss one another off, the faery world gets closer to war.

But even for as exasperating as the characters can be, Marr’s writing is as good as always (even if it does get a bit cheesy…does Seth really need to actually see dolphins in Aislinn’s eyes? Really?).

The world of Faery and the High Court are really cool – fascinating and mysterious and kind of scary, just like its inhabitants. Sorcha was…weird. A perfect High Queen and counterpart to Bananach, yes, but as a whole, somewhat unsettling. Her relationship with Seth gave us weird vibes, but apparently she needed a son, and Seth needed a mom, so that worked out okay. And, admittedly, even though we don’t like that he became a faery, we were glad to see Seth given a purpose besides keeping house for Aislinn.

Bananach, on the other hand, was oddly cool. We probably shouldn’t have liked her as much as we did, but her bird-like behavior and pure insanity made her very easy to visualize and perversely fun to ready about. We can’t wait to see her in the movie.

Also, Sorcha’s brother/chief adviser was weird and creepy and we’re not sure how to feel about the fact that the next book is about him.

At this point, however, we’re kind of ambivalent about Fragile Eternity as a whole. Yes, it killed Wicked Lovely‘s happily-ever-after, but we’re also intrigued by this look at life after the happy ending. Marr’s good at taking familiar themes to a more difficult, unconventional level that most other modern faery writers won’t, and we both admire and respect that.

On the other hand, everyone is a jerk, and there is no real ending. None of the conflicts are resolved, and we have no idea where Marr is going to take all of this. It’s very much a middle book, so, we can’t really do anything except recommend it, and hope that Darkest Mercy pulls a rabbit out of its ass.