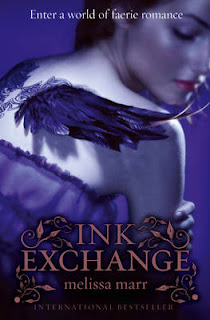 Seventeen-year-old Leslie knows nothing of faeries or their shadowy power struggles. When she is attracted to eerily beautiful tattoo, all she knows is that she has to have it, convinced it is a tangible symbol of the the changes she desperately craves for her own life.

The tattoo does bring changes-not the kind that Leslie has dreamed of, but sinister, compelling changes that bind Leslie to Irial, a dark and dangerous faery king fighting for the soul of his court. Slowly, Leslie is drawn deeper and deeper into the faery world, unable to resist its allures, and helpless to withstand its perils…

Melissa Marr continues her tails of Faerie in a dark, ravishing story of temptation and consequences, and of heroism when least expected.

Finally, we’re here to finish the review of Ink Exchange that we started like months ago. Be warned that, although we ended up liking this book a lot, this review is going to be full of spoilers, including the ultimate twist.

This book is actually really frustrating until the very end. Mostly because everybody is an asshole and you expect Leslie to have to choose between two relationships that are very unhealthy. But she doesn’t, and therein lies the brilliance of Ink Exchange.

Okay, to start this off we are going to talk about Aislinn, who is supposed to be Leslie’s best friend. However, in the few months between Wicked Lovely and Ink Exchange, their relationship has deteriorated so that they no longer confide in one another, despite hugely traumatic events and changes happening to both of them. As the new Summer Queen, Aislinn is distant and doesn’t want to share her new world with her friends. Leslie is coping with the aftermath of a rape instigated by her brother and isn’t ready to confide in anyone. The relationship is tense, but things get worse when Irial, the Dark King, begins to take an interest in Leslie.

We understand that Aislinn wants to protect the people she loves from the fae, but she disappointed us the most because of her stubborn refusal to just tell Leslie what was going on. She could have prevented everything if she hadn’t taken it upon her self to take away her friend’s choices. Even if she didn’t know what Irial was doing, she did know he was showing interest in Leslie, and she had a right to know what could happen. Aislinn should have warned her. It seems like common sense, but Aislinn’s fear put her friend in danger.

Aislinn also knew about the rape, but never talked to Leslie about it. We understand wanting to allow Leslie to bring it up when she was ready, but Aislinn didn’t even make herself available to a friend going through such a horrible ordeal. Then, in the middle of an argument between the two, she had the audacity to imply that Leslie was a slut. That’s so fucked up, even more so because Leslie consoles herself with the belief that Aislinn doesn’t know about her rape.

And then there’s Keenan. We may not have liked him in Wicked Lovely, but we sympathized and we understood where he was coming from. In Ink Exchange he runs that all into the ground with his manipulation and use of Niall and Leslie’s relationship to get into Irial’s court. We pretty much hate him now and we hope that he gets what’s coming to him in future books.

Irial, again, is the Dark King. He’s actually a fascinating villain because he does really shitty things and he feels no remorse for these things, but he does them for the sake of his court. The Dark Court feeds off of fear, pain and lust – basically all the dark emotions of the fae. Since the previous Winter Queen has been destroyed, the faery courts have been more peaceful, and Irial’s people have been starving. So to fix this, he creates a way to feed off humans by using Leslie.

The titular ‘ink exchange’ refers to a tattoo that Leslie decides to get in an attempt to reclaim her body after the rape. Unfortunately for her, the design she chooses is actually a magical mark that will connect her to the Dark King himself. The ink is made from a mix of Irial’s blood and shadow, and creates a link between them that makes Leslie a conduit of sorts for human pain, suffering, and lust. Irial channels it from her into himself, stealing Leslie’s own dark emotions in the process, which nourishes the rest of his court, but leaves Leslie strung out, numb, and unable to stray far from his side.

The relationship between Irial and Leslie is interesting because it gives both of them what they want, but is also incredibly damaging. Irial gets all the bad emotions from Leslie that he needs to sustain his court, but also gets a piece of her humanity that weighs on him and influences his feelings for her. As previously mentioned, Leslie gets the oblivion she’s been wanting, but loses a lot of herself.

Reading from Leslie’s point of view while she was going through this oblivion was one of the things that bugged Kayla about this book (and any other books or movies that use this technique). She doesn’t like the confusion and disorientation that you experience because of the writing, and wishes they could tell the story without making you feel that way. However, this may also mean that Marr is a great writer for having the ability to put you in Leslie’s shoes and feel what she is feeling.

The beauty of Ink Exchange is the way Melissa Marr resolves these relationships. We’ve seen plenty of other YA books where bad relationships are either ignored or exalted. Love triangles frequently involve two equally unhealthy options, but the heroine always has to pick one for the sake of a happy ever after. Melissa Marr defies convention here in the best possible way: she has Leslie choose herself.

When she realizes what Irial is using her for and how the relationship is affecting her, she finds the strength inside to get away. This is a feat in itself because like we said, it is almost physically impossible for her to leave Irial’s side. And she stays away, even though the magic makes it a lot like recovering from a drug addiction.

After breaking away from Irial when she is most vulnerable, she makes the decision to stay away from fairies for a while, and rejects Niall as well. Which is awesome because we think Niall is kinda creepy.

We have noticed that we haven’t talked that much about Niall, so we will do that now (also, Niall lovers, you will probably hate us after this). Niall is one of those deceptively nice people. Though you like him okay in the beginning, once you start seeing him from other people’s perspectives, the creep factor comes in. In his head he is a loving, caring guy, but his actions directly contradict his internal decisions. He has no self-restraint when it comes to Leslie; he’s selfish.

Niall’s touch is addictive, literally – it’s his power as a fairy. He knows this, and knows that it is really bad for humans, that it can even kill them. Yet he still uses it to quicken the development of his and Leslie’s relationship, and to pull her away from Irial. Even after Leslie cuts her ties with the Dark Court and Niall has seen all the harm an addictive relationship with a fairy has caused her, he’s still willing to pursue one between the two of them. And when she tells him no, he stalks her.

Luckily, Irial puts a stop to that, making Niall the new king of the Dark Court. He does this to protect Leslie, and we respected that. It shows how Irial’s love for Leslie has become as unselfish as Niall’s is selfish.

Moving on to a totally different subject, was it just us, or did the supposed broship between Niall and Seth come out of nowhere? Apparently this happened between Wicked Lovely and Ink Exchange, but we never get to see any of it, and when they tell us about this deep friendship, it’s kind of a shock.

And speaking of Seth, while he was pretty much the only guy in the entire book that we didn’t want to consistently punch in the face, he did have his moments. Like this one, for example – Niall is showing off to Leslie at the local fae bar and he decides to try and get her to drink a glass of the summer wine that got Aislinn so fucked up in the last book. This is the faery equivalent of plying her with a roofie – yet another instance of Niall being a dick. But Seth, who is there the whole time, doesn’t exactly put his foot down. He of all people should have been seriously upset about this, considering the grudge he holds against Keenan for doing the same thing to Aislinn in Wicked Lovely, but he just halfheartedly chastises Niall, and lets it go.

Great move, Seth, we were counting on you to be the decent one goddammit.

Any one of these factors could have totally ruined this story for us – and for the first 3/4 of the book, we thought it did. But Marr turned it around in the end, making Ink Exchange into one of the best books we read last year. We enthusiastically give it: