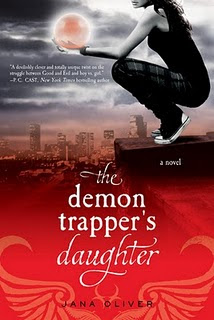 Its the year 2018, and with human society seriously disrupted by the economic upheavals of the previous decade, Lucifer has increased the number of demons in all major cities. Fortunately, humans are protected by trappers, who work to keep homes and streets safe from the things that go bump in the night.

Riley has always dreamed of following in her fathers demon-trapper footsteps. But when tragedy strikes in a top-level demon murders her dad, Riley finds herself in for a much more dangerous future than she ever could have imagined.

First of all, we’re calling FALSE ADVERTISING. The back-of-the-book summary implies a much more goal-oriented, intriguing, and structured plot than we actually get here. We are told in the first sentence of said summary that Lucifer has plans for our heroine Riley, but 340 pages in and we still have no idea what that is, and by the way, that’s the end of the book. It hints at major plot developments and evil plans and nefarious purposes, but until we get to the first organized raid on Riley and her allies, it doesn’t feel like the story actually begins. Unfortunately, that attack doesn’t occur until forty pages from the end of the book.

The vast majority of Demon Trapper’s Daughter is devoted to set-up and world-building, and while the author succeeds in creating a rather unique – to YA literature – atmosphere, the pacing and plot suffer for it. Sure, a lot happens in the first three hundred or so pages, but very little of it amounts to anything. Only two of the many threads that show up here – Riley’s father’s death and the holy water conspiracy…ah, more on that later – get any resolution at all, and we’ll be honest, we’re not sure how absolutely necessary it was to devote so much time to them.

Let’s talk about Riley’s father first. We understand why the book structured the way it is, as far as his inclusion goes. It takes fifty pages for him to die because we’re supposed to get to like his character, and empathize with him and Riley when he does bite it. But in order for this to really work, we shouldn’t have seen it coming. We’re told on the cover synopsis that he dies, and yeah, it’s hard to get attached to a character when you know he’s a goner. So instead of really connecting to him or falling into the trap of expecting his continued presence, we spend most of his 50-page introduction wonder when the hell this guy’s gonna die and the story’s gonna start.

When he does finally kick it, you think “Alright, time to get this show on the road”, but no. No, no, no, no, instead we’re treated to multiple nights of Riley babysitting his grave to ensure that Necromancers don’t raise him from the dead. This is a neat idea, but the same thing happens every night (nothing), which makes it a repetitive experience.

When she’s not babysitting the grave, Riley pursues a storyline involving outdated holy water. Yes, that’s right, outdated holy water. This is our major development for this book. It’s the only mystery hinted at throughout the story to which we get any answers, and this is kind of ridiculous to us. Here we’re promised a story about this teenage girl in an epic conflict with Lucifer, a battle between good and evil, hell-bent on avenging her father, ETCETERA ETCETERA ETCETERA, but instead, we get a girl playing Erin Brockovitch, digging up a corporate conspiracy that involves – and we’re not shitting here – a company re-labeling outdated holy water with a more recent date.

Again, we get why this conspiracy in itself might matter to the heroine. Trappers and hunters need fresh holy water to fight demons, not to mention that it factored into her father’s death, her father was investigating it himself, blah blah blah. But why is this one of the biggest developments in the plot?

It’s one of the many plot threads that gets set up and then set aside for a later book – in other words, Trilogy Syndrome. Demon Trapper’s Daughter is full of those. I mean, we’re told in one chapter that some actors from a popular TV show in this world will be coming down to film, and that the local Demon Trapper Guild – Riley, specifically – will be showing them around. Not two chapters later, that thread is totally forgotten when the overarching plot attacks. We assume they’re going to pick it up in the next book, but for now, it’s kind of pointless. Unnecessary. So much of this book feels like that – it’s like all of the stuff that happens behind the scenes, that characters in the novel proper would just mention in passing.

Truthfully, we’re left wondering why the series didn’t just start with the previously mentioned surprise raid. I mean, it’s not until the very last chapter that we even get a glimpse of the big Destiny Riley supposedly has in store for her, when she – SPOILER – agrees to kick ass for Jesus in exchange for the life of her boyfriend (who is so going to be evil, calling it now!).

At any rate, hopefully, the next book will be, you know, the actual book.

That pretty much covers our feelings on the plot. On to the heroine herself!

In her acknowledgments, the first people Jana Oliver thanks is PC Cast and her daughter Kristen for “offering sage advice and making my teens sound their age”. Okay. First lesson for new writers from the reviewers: do not, under ANY circumstances, ask Kristen Cast for advice, especially not on making your teenagers sound like teenagers. Seriously, that is the absolute worst part of House of Night, and it’s the part she asked Kristen for help on? BAD IDEA.

We don’t know if it’s just because of this or if she was already written that way, but we had to keep reminding ourselves that Riley was seventeen. Her voice and her actions were closer to that of a thirteen-year-old. She was less a self-assured, confident young woman than a petulant child.

She’s also one of those heroines that inspires every guy in her age-range and three-mile radius to fall madly in love with her. There was Beck, her older-brother-but-not-really figure, and protector after her father’s death (and Kay’s favorite); Simon, the actual boyfriend (evil, we’re telling you); Peter, her best friend who is not-so-secretly in love with her; and Ori, the snarky mysterious stranger who is perpetually to the rescue (Cyna’s favorite…so far).

Girl is starting a reverse-harem or something. She has more love interests at one time than Zoey Redbird, and that’s saying something. I mean, sure, guys are physically attracted to her, but three out of four in love, really? Is the love pentagon really necessary?

This particular complaint might just be our perception, but we didn’t quite believe every aspect of Riley’s immediate reaction to her father’s death. It felt…rushed. Riley goes from not believing he’s dead to extreme sadness and sobbing to angrily blaming Beck for his passing, and then starts flashbacking to happier times with her father as a child. In the space of like one night. Yeah, everyone experiences grief differently, but not usually this quickly. We would buy the disbelief, the sorrow and maybe the blame as well, given the situation. But you lose us with the flashbacks. Why would you reminisce about someone whose death you haven’t processed yet? I mean, she wakes up the next morning thinking her dad is still alive and cooking her breakfast, so clearly she hasn’t fully realized that he’s gone.

Her actions and words also felt a bit cliche, like bits and pieces stolen out of different movies and inserted here to form a patchwork sort of emotional reaction. She does the whole grief-inspired rage-punch thing, and both characters spout off variations of old grief classics like “I couldn’t save him”, “he’s gone”, and “you should have died instead of him”.

The whole scene was slightly off-putting for something that a relatively large page count was put into making emotionally relevant.

The concept was strong, and the actual demon-hunting sequences were fun, not to mention the monsters themselves; we want a klepto demon! Learning about the orbs that helped trap the demons, what the colors meant and what they did, was interesting as well. So was the whole rather seedy demon-selling process. And we liked the idea that demons and angels are widely known about – at least there’s no big pact of secrecy in that respect.

Basically, all of the things that you buy the book for – the trapping, demons, etc – are really good. There’s just not enough of them.

Still, we’re gonna recommend this book. It has a lot of potential, and we expect the next book to be much better. And clearly you have to read this to enjoy that one, right?


Don’t forget, we’re giving away a free copy of Demon Trapper’s Daughter as a part of our 50-Follower Giveaway!