Home Book Reviews Something Completely Different: Can You Survive the Zombie Apocalypse? by Max Brallier 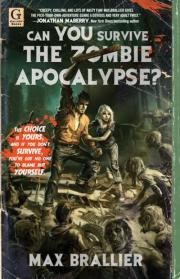 Inside these pages lies unspeakable horror. Bloodsplattering, brain-impaling, flesh-devouring horror. You’ve probably read your fair share of zombie stories. But this time it’s different. No longer can you sit idle as a bunch of fools make all the wrong moves. All hell is about to break loose—and YOU have a say in humanity’s survival.

You have choices to make.

Will you be a hero?

Or will you cover your own ass at all costs?

Can you withstand the coming hours, days, weeks, and months? Or will you die amidst the chaos and violence of a zombie uprising?

Or, worst of all, will you become one of them?

I love zombies. Have I ever mentioned that? As a horror genre and as movie monsters, they are probably my #1 favorite, even over vampires. God knows they’re more fun. And I’m not gonna lie, it has a lot to do with the fact that they are be one of the few apocalypse-types I may be able to survive. I mean, there’s no way I’m surviving a robot apocalypse – they’re too smart. Alien invasion? Y HALO THAR NEW MASTERS. Natural disasters? Excuse me while I curl up under my bed and cry. But zombies? I think I’ve got a shot.

And finally, there’s a book to help me test out that theory.

Can You Survive the Zombie Apocalypse is a zombie Choose Your Own Adventure book for adults.

Let me say that again.

A ZOMBIE CHOOSE YOUR OWN ADVENTURE BOOK FOR ADULTS. Do I even need to say any more? If you’re even casually interested in zombies, this should have you squeeing like a fourteen-year-old girl. My only question is why someone has not thought of this before, because this is the BEST IDEA IN THE HISTORY OF MANKIND. Apparently this has been thought of before, and those books will immediately be going onto my TBR pile.

Anyway, the great thing is that Can You Survive the Zombie Apocalypse, or CYSZA (size-uh), as I’m going to begin calling it because I’m tired of typing that over and over, is not only a good idea, but a well-executed one. From one simple choice with three different options – to go home, get a taxi out of the city, or take a subway – come a multitude of zombie stories of varying sub-genres and degrees of awesomeness.

The different choice branches can take you all around New York City, playing a role in a campy genre-standard story. You could end up fighting off a horde of undead baseball fans with a katana-wielding stripper in Yankee Stadium, or ride with a band of Hell’s Angels to clear out the Empire State Building for the government. Or you can get yourself out of the city – brave the highways to get back to your hometown on a Zombieland-esque roadtrip, or get yourself dumped by the military in the middle of nowhere after playing labrat. It all depends on you.

Granted, this isn’t really – and I was a little disappointed at this, btw, because I have unreasonable expectations – going to test your ability to survive a zombie apocalypse. Obviously no book is going to be tailored to include every decision you’d make, but CYSZA is always about the adventure, so liberties will be taken to ensure that an innocent decision to refuse a drink from some arrogant stock broker ends with you in a strip club, fighting off a pack of zombie strippers before you’re allowed to make another choice.

I’ll admit it’s been a while since I’ve read a Choose Your Own Adventure, so I don’t remember if this was common to all of them, but I was pleasantly surprised by the continuity’s consistency here. For example, if you’re faced with the choice between staying in a car and waiting out a firefight, or getting out and running away, and you choose to stay, and the car gets blown up, the car will still get blown up if you go back and choose to run away. It’s a little thing, I suppose, but it still makes the environment feel like an actual world with its own goings-on, and not a trap designed specifically to screw you over or give you a break.

I also liked – and was rather amused by – the fact that you’re not consistently rewarded or punished for doing the morally right thing, or for having a self-preserving attitude. Sometimes being a hero works out, other times it’s better to just let it be. There are only a few instances where the book goes out of its way to punish you for being a dick, and one of those instances is utter hilarity.

Before writing this review, I went through every plot line, followed every different decision, and made my way to every ending. Most of them finish with the words “an end”, but there was only one storyline that concluded with the words “The End” instead, and it was suitably Epic. It takes place at the New York Comic Con and involves the Man himself and that’s ALL I’M SAYING.

They rest are neatly varied, even the deaths – some are abrupt and brutal, others stretch for months in which you waste away. The same can be said of the plotlines. Some end (in success or failure) in a matter of hours, and one in particular took place over the course of about a year. None of the endings are particularly happy, nor do they ever guarantee your continued survival, but such is the fate of a zombie apocalypse survivor.

My personal favorite had your character barricaded alone inside a Barnes and Noble. You’re secured on the second floor by escalators you rigged to only move downwards (XD!), comfortably preparing yourself for the inevitable fight by reading various zombie apocalypse books while your broken ankle heals. This, incidentally, is my Zombie Apocalypse Emergency Protocol 1. Minus the broken ankle. And inevitable fight.

I also found it funny that, for a book that generally discourages excessive drug/alcohol usage (because really, how coordinated are you when you’re shit-faced?), by far the most peaceful ending had you holing up with a stoner, playing video games and smoking weed for the better part of six months until the military rescues you.

There really is something for everyone.

All in all, this is a fantastically fun read. It’s pure escapism, hooking us with the nostalgic value of mastering our own destiny, and amping it up to an R-rating. It has its obnoxiously juvenile moments (really guys, does having a pretty bartender take a picture of her own tits with your cell phone qualify as any kind of satisfying ending?) and I’m sad to say there isn’t one significant woman in this whole book who isn’t totally objectified, but it is what it is.

A goddamn zombie choose your own adventure book, why aren’t you reading it now? 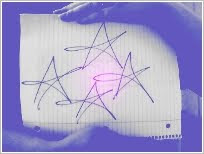