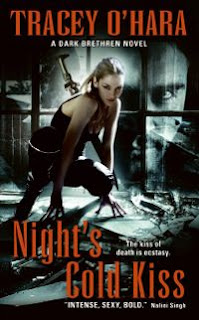 The tension between the Aeternus, an ancient vampiric people, and humanity has been mounting for over a century. But when rogue vampires begin to drain humans in order to achieve an illegal blood-high, all bets are off.

After the death of her parents, Antoinette Petrescu devoted her life to becoming one of the top Venators, the elite hunters who destroy the rogue Necrodreniacs. Her kill count is legendary and her skills superb.

But now the serial killer who killed her parents has returned. And to stop him Antoinette must join forces not only with the Aeternus, but also their most legendary killer. One that is both dangerously attractive, and involved in buried secrets of her past. More dangerous still, a dark attraction grows between them – one that could doom both races.

Backstory time! I originally picked up the sequel to this novel, Death’s Sweet Embrace, from NetGalley, thinking “What the Hell, I bet it’s only tangentially related, I’ll bluff my way through,” only to find myself 50 pages in and very intrigued, but utterly lost at the slang and “official” terms I didn’t understand, and references to events and characters that may or may not have been important in the previous installment. So I sucked it up and bought Night’s Cold Kiss, my first purchased e-book, to get a clear introduction into the world of Dark Brethren.

About 50 pages into this one, I realized that there had been some ridiculously amazing leap in quality between the first and second entries into this series, because this wasn’t the same interesting, crime-drama-type story I’d been drawn into in Death’s Sweet Embrace. This was Cliched Fantasy Kitchen Sink World B, with Cliched Vampire Hunter Love Story A, filled with stock characters and strung together with a plot whose primary agenda seemed to be furthering the leads’ love-to-hate-you romance.

Like the summary says, Night’s Cold Kiss is about Antoinette Petrescu, an elite vampire hunter Venator. She’s a great big obvious Mary Sue/genre cliche, being a prodigally good vampire hunter from a long line of vampire hunters who entered into the trade because – all together now – vampires murdered her parents! That’s right, very good, guys!

Anyway, let’s go down the line, shall we? Antoinette:

I don’t think I’m exaggerating the canon opinion much here, because honest to God, the author goes on and on about Antoinette’s astounding beauty, even more than she does about the vampire love interest, and hello that’s who we women are supposed to be fapping over. We’re quite frequently warped into our hero, Christian’s, brain at key moments (during sex, at a party) just so we can admire Antoinette being a sexy beast. Though he cops to having seen thousands of women naked, she tops them all, as she is “honed to physical perfection by hours of training”. Also she has nice tits. Antoinette, of course, doesn’t think she’s all that, and feels awkward when the author gussies her up for different outings.

If her resume didn’t make it clear, the constant fawning over her looks should – Antoinette is pure wish-fulfillment, captivating the boys and charming everyone with her oh-so-cool fuck-you attitude. Even our lead’s skeptical mother is eventually won over by her sincerity/badassery combo.

To make it worse, she is one of those kinds of badass heroines, you know, the ones who get a pretty bitchin’ fight scene in the beginning to establish their capacity to take care of themselves, and then promptly lose that capacity whenever the hero is around. Even though Antoinette has supposedly executed hundreds of bad vampires Necrodreniacs, the only fights she’s able to handle herself after the first one are with drunk and/or horny human men. Every other fight that involves something not-human requires her to be saved by her love interest, Christian. Not to mention that she spends half the book locked away “for her own protection”. I. Hate. That. If there’s one cliche that will ruin a book every time for me, it’s the “badass” heroine who has to be saved.

Anyway, as I was saying, Night’s Cold Kiss takes place in a world where vampires and shapeshifters Animalians and actual shapeshifters and witches and apparently Mer-people have always existed. There used to be a big war between the vamps and humans, but thanks to Antoinette’s and Christian’s ancestors, that is no more, and a number of bureaucratic organizations have been implemented to oversee the parahumans.

Vampire Aeternus Christian is part of the Department, one of those bureaucratic organizations, and he and his friend Nikolas are wrapped up in some ridiculous spy shit case that even now I’m not entirely clear about. Basically it boiled down to someone out there looking to revive “The Troubles” – a rather stupid way of saying “political and social unrest between the vampires and humans” – via a few good ol’ assassinations. Their deep-cover source on the matter just happens to be Antoinette’s dad, who, SURPRISE, wasn’t actually dead and has also gone missing. So they bring Antoinette in on the case in hopes of luring out her father or his captor or something, IDK her relation to him was made relevant somehow. This brings them to a supposedly-unrelated-but-not-really plot, in which it turns out that the vamp who killed Antoinette’s mother is also not dead and out there killing women who look a lot like Antoinette. This all leads them to a bigger conspiracy, since this vampire works for the Big Bad behind “The Troubles.”

It’s all rather confusing, and though I understand the overall progression, I’m still a bit foggy on the details. What was clear was that Antoinette’s initial involvement was rather obviously shoehorned – they just needed a “reasonable” excuse for her to be around in the first place, and her father provided that. The serial-killer plot – I hesitate to say “subplot”, because it was more like a link in the chain of events that lead them to the final battle – is more well-thought out and effective, as it deals with Antoinette having to face her childhood nightmares, going after the man who killed her mother in front of her.

But plots and subplots aside, the real star of the show here was Antoinette and Christian’s relationship. Really the plot is just an excuse to get them together, and it takes every possible opportunity to couple them – parties that just must be attended, recon assignments that require they pose as a couple and go to a club, near-death experiences that leave one or both of them in need of the others blood to heal, and, my personal favorite, an old injury that suddenly flares, leaving Christian no other option than to treat it with his blood, which makes Antoinette irresistibly horny for him. They proceed to get it on in his private jet while her old uncle and Christian’s bff hang outside waiting for them. This all takes place like five minutes after they meet, FYI.

Christian is generally kind of lackluster as far as heroes go. He’s hot. That’s kinda it. The vast majority of his and Antoinette’s relationship development involves them resisting the urge to fuck, but being so tempted! I love how Antoinette keeps “accidentally” (but not really) seducing Christian. With fruit. Then they start fucking, but insist it doesn’t mean anything, going on and on like so:

A lot of the romance feels like padding, and the plot itself, while passable, is terribly predictable. We get two different genre’s staples here – the International Conspiracy and the Serial Killer, and neither vary greatly from what you’d expect in the corresponding action thriller. Unfortunately this means you can pretty much figure out every twist before it occurs, the two major ones being the most obvious of all thanks to some heavy telegraphing and two general laws of action fiction:

1) if a character looks back at another character at the close of a scene for absolutely no reason, and that character doesn’t do anything significant during this time, it’s a “last look”. That guy’s doomed.

2) if it’s a big, complicated conspiracy, there’s always a mole; if there’s a mole, it’s always the nice one

Also, it’s cliche. Did I mention that? It even borrows from other genre’s cliches. The climax involves a – SPOILERS~ SKIP IF YOU WANT TO ACCURATELY PREDICT IT YOURSELF – newly-turned Antoinette and Christian running to escape from a Self-Destruct Sequence, which requires them to just barely avoid Fire in the Elevator Shaft. This all comes about with the help of a plot device creepy Undead Child that they end up adopting into Antoinette’s family as a sort of substitute daughter for her father even though she’s like 150 years old, HOW WRONG IS THAT? In fact, the only really “original” twist I can think of here involves – MORE SPOILERS YOU KNOW but not as major as you’d think – all supernatural creatures actually being descended from aliens. For rizzle. And not gonna lie, I think I’ve heard that one too.

Here’s the thing about Night’s Cold Kiss – it’s not bad, per se. It’s a notch above the Carina Press/Harlequin vampire drivel I’ve been reading lately, and though there are elements of the plot that only existed to force intimacy and relationship development on the hero and heroine, at the end of the day there was also a legitimate mystery to be solved – several, actually. There were characters who, while not overly developed, were still entertaining. The sex scenes are pretty darn good, especially for a book that’s more urban fantasy than paranormal/hardcore romance. And while prone to explaining character’s feelings and motivations rather than showing them, and reusing a lot of the same phrasing, it was pretty decently written.

No, Night’s Cold Kiss‘s real crime is in its utter and total lack of originality. Every character, world element, and scene felt like it had been borrowed from another book, thrown in a big pot, and then melted down to form this utterly predictable, bizarrely familiar vampire/vampire hunter romance story/action movie. I’ve talked about cliches in books before, but this book IS one giant cliche. It’s a cliche personified – literature-ified? You get the idea. And though I feel weird saying it considering I’m eagerly moving on to the sequel, on its own, I can’t recommend this one. We’ve seen it before, and we’ve definitely seen it better.

Fingers crossed the sequel continues to be better.

Like an old-time movie star (without the latent homosexual tendencies).