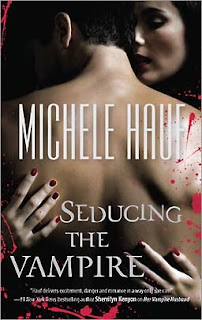 In Marie Antoinette’s Paris, the beautiful vampire Viviane seeks a male patron who will allow her to live on her own terms. Courted by two feuding brothers, Viviane succumbs to the handsome rebel, Rhys. She’s unaware that Rhys has other, darker, motives. He seeks vengeance against his brother, Constantine—by stealing Viviane and tainting her with his blood.

But just as Rhys is realizing the depth of his love for Viviane, his brother takes his revenge. By casting a spell on the woman they both desire, he condemns her to a living death inside a glass coffin.

Two centuries later, Rhys hears the legend of the Snow White vampiress, imprisoned deep in the tunnels under Paris. He must find her and set her free, but will he be able to save her from the evil still intent on destroying them?

Cyna reads a romance novel. SHOCK OF THE CENTURY: she is ambivalent about it.

Seducing the Vampire is yet another romance title I’m seriously “eh” about. It wasn’t great, but it wasn’t badly-written, nor was it terribly offensive. I can’t really rant and bitch about it, but I can’t sing its praises, either. All I’m left with after finishing it are a few small complaints and compliments, and the sincere wish that this book had tried to be a little more.

Let’s start with the good: Seducing the Vampire is one of the few – perhaps the only – romance titles I’ve read so far where I felt the characters were more than pawns designed to fulfill the author’s kinky fantasies – or worse, the author’s supposition of the reader’s kinky fantasies. This book has heart, and the primary characters, Viviane and Rhys, rang truer than most. There were moments where their relationship, their love, felt real, and even my skeptical little heart went “aww”. One such scene had the couple cuddled together on a couch, Rhys easing the illiterate Viviane through a book of Shakespeare’s sonnets, rewarding her with kisses when she finished a line right. Such oddly mundane-but-tender moments aren’t readily present in vampire romance novels, and I appreciated the way that sort of activity grounded the developing relationship between these two.

The writing style, while occasionally given to superficially flowery, melodramatic statements, was serviceable, and plot-wise, the core concepts are there. I liked the idea of a Vampire Snow White, at least as far as the tragic implications go. As Rhys mentally anguished over and over again, he believed for two hundred years that his lover was dead, and she had to endure two centuries of torture, being conscious but unable to move her body. Even if she were rescued, after two centuries underground, she would certainly be insane, right? With that kind of premise, there’s no way to escape without some tragedy. What a promising set-up!

I know you guys are looking at me funny now, but I’m not really a sadist, I just like tragic endings. I PROMISE.

But, as usual, the face-palm and sigh-worthy moments seemed to outweigh the good stuff. Like the fact that the story is set in the author’s pre-established Fantasy Kitchen Sink world. We have weres, made and born vampires, faeries, witches, warlocks, various “familiars” (shapeshifters), demons, multiple half-breeds, and even nephilum, which I assume means straight-up angels are out there somewhere, too. Luckily most of these we learn about in passing, and we’re not forced to spend too much time exploring any irrelevant cultures. Still, I can’t say I’m a fan of this particular trope. There’s such a thing as overkill.

There were also some cringe-inducing elements early on that made me weary – for example, Rhys first learns about the legend of this Vampire Snow White by overhearing a conversation between two random strangers in a bar, who just happen to be discussing urban legends as he walks by. Cue Family Guy clip: “Coming up in the next half-hour, our in-depth look at conveniently placed news reports in television shows.” (CURSE YOU YOUTUBE FOR NEVER HAVING THE VIDEO CLIPS I WANT.)

Second, in this world, it’s established early on that vampire women – and only the women, mind you – must feed from a male Patron in order to survive. Also, they can get pregnant, and this makes them EXTREMELY VALUABLE, especially our heroine, who is a superspecialawesome born female vampire, which makes her even more fertile. Gag. There is so much wrong with vampire breeding, but you know what, I will buy born vampires easier than I’ll buy made vampires having babies.

Anyway, this puts our heroine in a bind when her longtime Patron and mentor is murdered by a werewolf, and she is forced to seek out a new one. The Patronage issue is the primary source of romantic conflict, as her lover refuses to Patron her (due to an extremely convenient complex resulting from his being a were/vampire halfbreed), but his evil rival/brother is willing and able.

However, we know from the start that a) it is not the Patronage issue that ultimately keeps Rhys and Viviane apart because, hello, Vampire Snow White. And then we find out that modern-day vampiresses can survive without Patrons, anyway. It was basically just a way for male vampires to keep the female vampires on a leash. ‘Cause, you know, everyone loves a harem.

So the dramatic tension surrounding the outcome of Viviane’s Patronage goes from minimal to zip before we’re even halfway through the book. This wouldn’t be as much of an issue if nearly 3/4 of it weren’t devoted to drawing out the love triangle, and hyping up Viviane’s choice between dying with her love or living miserably with a Patron. Jeeze, MacGuffin much?

And did I mention that this book is long? It’s nearly four hundred pages, and a loooot of it is padding. Every character that takes a turn narrating is guilty of angsting over and over again about the same things, and most chapters go something like this:

Also, the sex is rubbish. For a book where the romance, for once, does not feel overly forced or contrived, the sex scenes themselves are rushed and pretty general. Where most romance books spend paragraphs agonizing over positions and sensations, Seducing the Vampire takes more of a wham-bam-thank-you-ma’am approach. There’s the usual Sex-Act Progression course, but the action’s actually kinda sparse, and once they do have sex, the action pretty much stops. The big finale act that was implied once Rhys revealed his true nature – that is, sex with Rhys while in werewolf form because THAT’S HOW THEY BOND OK – never happens, and I’m not sure if the author forgot, or just thought it’d be too creepy since he has a wolf head and fur and stuff.

That is all probably relevant in a romance novel, and I’m sure someone will probably care. Moving on!

There are the usual assortment of romance/vampire book cliches, as well. There’s a Council, of course, and Rhys is the lone investigator, looking into Viviane’s mentor’s death, although he literally just happens upon the solution to that case, since he spends most of his time trying to or actually schtupping Viviane. There are the two handsome, supernatural brothers, one good and one bad, in love with the same woman. The warring supernatural races – in this case, the vampires and the werewolves – and Rhys, the lonely outsider, being of both worlds but belonging to neither. Viviane is the strong, “independent” woman who is looking for a man to challenge and just take her. They even borrow a few cliches from outside the genre, as Rhys has made a bargain with a fairy and promised it his firstborn child.

But where this book really screws up is the ending. Naturally, it all comes down to a race in present-day Paris to find and free Viviane, who has been paralyzed and imprisoned in a glass coffin beneath the city for two hundred years. Luckily it takes them all of a day to find her, and despite EVERY LOGICAL REASON to be so, she is neither dead nor a raving lunatic. Apparently she “lost track of time” and that kept her from going batshit IDK it makes no sense, but what did I expect, this is a romance, it could never have anything but a happy ending. Goddamn it. I suppose it gets a half-credit for them saying that if she goes a day without drinking blood, she gets out of sorts, but that’s it.

And there’s no boss fight. WTF? Not only did the villain kill the heroine’s mentor, he then went on to pretend to murder and lock her up for TWO CENTURIES hoping she’d go insane. Both characters rant about wanting to kill him. But do they? No. Rhys even gets permission from the Council to kill him. Once again, the book hypes up this huge rivalry between the two brothers leading up to the execution and discovery of this horrible deed, and they never fight to the death. THE HELL?

In the end, Rhys is just like “Eh, I don’t want to waste time killing him that I could spend with my family” and I’m like “SRSLY DUDE how long would it take you to kill him? HE LOCKED UP YOUR WOMAN. HEY, VIVIANE, HE IMPRISONED YOU FOR TWO HUNDRED YEARS, remember how you were all mad and like ‘ME KILL CONSTANTINE’ when you woke up? Yeah, I think you could take like an hour out of your eternal life to go find him and STAB HIM IN THE FACE.” UGH.

And even forgiving those two trespasses against logic, Seducing the Vampire‘s epilogue does an incredibly effective job of making you feel as though you just wasted hours of your life on the longest cold open ever. Yeah, MAJOR SPOILERS:

Turns out Viviane was pregnant with Rhys’ offspring the entire time, and the final scene of the Viviane and Rhys’ story has Rhys giving up one of his (twin) children to the fairy. Btw, I also don’t get why she was imprisoned with Viviane for all that time but whatever. Anyway, the epilogue is set fourteen years later, where a MAJOR DEAL is made out of the fact that half-breed Rhys and full-blood vampire Viviane’s son, is himself only a fullblood vampire, and the fairy, looking for an exotic halfbreed DUN CHOSE WRONG. The book ends with her screaming in rage and then…TO BE CONTINUED. NO REALLY.

Did…we seriously just go through all that shit to set up a story involving Viviane and Rhys’ son? Are we supposed to know him already from other books set in the world? I’m not sure. There were some elements and characters that just showed up and then wandered off with no real explanation as to the time or detail given to them that made me think we were supposed to recognize them or something about them. But even if it’s not the case, that epilogue certainly made the book feel like one long introduction.

All in all, Seducing the Vampire is not terrible. There’s heart in it, and it’s a good idea. For once, the plot doesn’t take a backseat to the sex. However, it makes some pretty big missteps towards the end, it meanders, and it’s much longer than it needs to be. Still, I’m torn. Will I read the next one? Maybe. Would I read this again if I knew what it would be like? Probably not.

Again, I should really just admit that I’m not the target audience here.