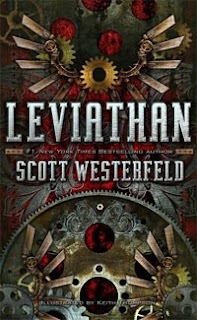 It is the cusp of World War I, and all the European powers are arming up. The Austro-Hungarians and Germans have their Clankers, steam-driven iron machines loaded with guns and ammunition. The British Darwinists employ fabricated animals as their weaponry. The Leviathan is a living airship, the most formidable airbeast in the skies of Europe.

Aleksandar Ferdinand, prince of the Austro-Hungarian Empire, is on the run. His own people have turned on him. His title is worthless. All he has is a battle-torn Stormwalker and a loyal crew of men. Deryn Sharp is a commoner, a girl disguised as a boy in the British Air Service. She’s a brilliant airman. But her secret is in constant danger of being discovered.

With the Great War brewing, Alek’s and Deryn’s paths cross in the most unexpected way – taking them both aboard the Leviathan on a fantastical, around-the-world adventure. One that will change both their lives forever

God, look at that cover. It’s like a steampunk fan’s wet dream, right? I’ve been wanting to read Leviathan forever, and finally, I got around to it this week. And you know what? It wasn’t bad.

I’m not exactly a Scott Westerfeld fan. I tried the first Midnighters book back in the day, and found it seriously lacking originality. That experience put me off his Uglies series, and would have put me off this one, too, if not for that cover. *o* But against my expectations, Westerfeld’s crafted a pretty solid alternate history steampunk adventure here. We’ve got political intrigue, genetic engineering, two likable young heroes, and a cool cast navigating the tumultuous events (some based on fact) leading up to what we now know as World War I.

The writing is engaging, and after the first few chapters, I was hooked. The dual-perspective formatting worked very well – I found myself ending each section anticipating what would happen to the character I was currently reading about, only to immediately get sucked in to what was going on in their counterpart’s world. I’ll admit, this is one of my favorite storytelling methods. When it’s done well, it makes for quite the page-turner, and I enjoy the puzzle aspect to it, watching how each separate set of events intertwines to form one complete story. It helps, of course, having likable protagonists, and Leviathan certainly delivers there.

I know I tend to harp on this, but OH MY GOD STOP THE PRESSES, we have intelligent, driven, genuine teenage leads who undergo actual development.

Well, one of them does. The other is sort of consistently plucky, but I liked her. These are the kinds of teenage leads I can admire and comfortably read about, rather than wanting to punch them in the face every few pages.

I realize that this is a very different setting and situation, so naturally the character’s maturity level is going to differ from a modern teen’s, but these kids show incredible determination, drive, and dedication to their goals. They have things that they’re working towards, that they care about that don’t involve ~*true love*~, and that is incredibly refreshing for a YA title. Also, they never whine. No matter what incredibly shitty circumstances come their way, they suck it up and don’t bitch. SCORE.

Of the two, I empathized and related a bit more to Alek, myself. As I mentioned, he was the one to undergo the most development through the book, so he felt more like a real person to me. Not to say that won’t change in the next book – we get glimpses of some changes in Deryn towards the end of Leviathan – but for the most part, she seemed a bit one-dimensional. Cute and plucky, but more of a vehicle through which the author could explore her world.

Which, by the way, is really cool. The alternate history Westerfeld’s got going on here is quite interesting, and I like both the way he’s had the world develop, and the way he presents it. In Leviathan, Europe is divided into two primary factions. There are the Darwinists, consisting of Britain, France, Russia, Serbia, Algeria, and Belgium, who’ve mostly rejected industrial advances in favor of “harnessing” nature to serve their needs, via genetic engineering. Then there are the Clankers, Germany and Austria-Hungary, who have rejected the Darwinist methods as “godless” and “unnatural”, and have instead gone full-on steampunk: airships, mechs, the works.

Yes, it is a little broad and a bit obvious, but Westerfeld does well, having a protagonist on each side, and a little religious dissent within the Darwinist faction. He hasn’t – thus far – demonized or elevated either party’s technological course. In fact, it’s pretty clear that the overall story arc will result in – or at least advocate – a blending of the two cultures.

Er, I’ll be honest though, the “fabricated animals” really bugged me. I’m a bit more comfortable with the Clanker’s technology than the Darwinists, because the use of the animals in the Darwinists’ society made me cringe. I’m not sure if it was meant to come off that way or not, but it felt almost as though their empires were built on the backs of slaves. I mean, they mention more than once that these animals are engineered to be at least somewhat intelligent. They clearly feel. And yet the Darwinists use them as weapons, vehicles, and tools. Their airship is a giant helium whale, for God’s sake. They live and house things inside it. The thing got shot full of holes in a raid, how is that not animal cruelty? All I could think of whenever they described the Leviathan was that episode of Doctor Who with the kind old star whale that the British Empire built their colony on and then tortured for centuries to keep it moving. :((((

Still, squick-inducing animal-rights issues aside, it’s a neat idea. Leviathan is a great example of an introductory book done right: we get world-building doled out at a good pace, lots of action, a rough idea of the overarching plot, a satisfying conclusion, and no idea where the next book will take us.

HOWEVER, Leviathan is not perfect. When I said that Westerfeld had created a good adventure story, I meant it. But really, that’s all Leviathan felt like to me – an adventure. There really wasn’t anything…deeper to it.

While the supporting cast was likable and entertaining, they were also somewhat underdeveloped. They were there to help or play sidekick to the protagonists, who get all the really intense action scenes. Only the protagonists were really allowed to do anything epic, even when they weren’t the most qualified, and their moments of glory, while fun to read about, occur because they’ve got that spontaneous wunderkind thing going on. They shrug off serious injuries like Bruce Willis in a Die Hard movie (even when they’re piled on), and get out of tight spots by virtue of being a main character.

Again, not to say that this won’t change in the future, but I was hoping for a little more depth here. Especially from side characters like Master Klapp and Dr. Barlow, who, for being one of the few female scientists, Darwin’s granddaughter, and a creator of the Leviathan itself, was not allowed to do much more than be demanding and carry an excessive amount of luggage and cart around impractical pets. Yes, okay, she deduces Alek’s – and probably Deryn’s – secrets, but that’s kinda it. Not anything terribly science-y. Ah well, maybe in Behemoth.

I was glad to see Count Volger turn out to be something more than “the mean teacher”, but I swear to God, if they hook him and Barlow up by the end of the series, I’ll be pissed.

Then there was Deryn. Again, I did like her. She’s adventurous, tough, and quick-thinking, and I’m seriously overjoyed that her relationship with Alek will truly be one of equals. This almost never happens. They complement each other, from their unique skill-sets to their vastly different personalities, and I liked that of the two, Deryn is both more physically able and more outgoing. It’s a nice switch.

That being said, I wish that this equality didn’t have to come at the expense of her femininity. I realize that she’s not only a tomboy, but has to hide her gender to stay in the Service. I get that. But really, if you didn’t know Deryn was a girl, you wouldn’t really be able to tell from her narration (a few quips about the nature of boys aside). The only glimpses we get an awareness of Deryn as a women are towards the end, where she starts getting butterflies for Alek. SIGH.

I mean, really? There’s more to women than the fact that some of them are attracted to men, but Westerfeld really missed the mark with Deryn, because that’s really the only way you could tell. She didn’t feel like a girl.

Finally, it might just have been me, but Leviathan felt a bit…young. The tone and treatment of the main characters had me thinking of them as really intelligent junior high kids, not two nearly-sixteen-year-olds. I wonder if it wasn’t originally intended to be a JF title?

Issues aside, Leviathan is still a good read. It’s almost like a steampunk Indiana Jones – a bit shallow, but fun to experience. I’m looking forward to getting my hands on the sequel, and I’m very hopeful that this will turn out to be an entertaining series.