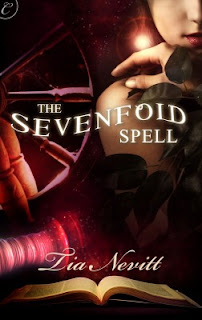 Have you ever wondered what happens to the other people in the fairy tale?

Things look grim for Talia and her mother. By royal proclamation, the constables and those annoying “good” fairies have taken away their livelihood by confiscating their spinning wheel. Something to do with a curse on the princess, they said.

Not every young lady has a fairy godmother rushing to her rescue.

Without the promise of an income from spinning, Talia’s prospects for marriage disappear, and she and her mother face destitution. Past caring about breaking an arbitrary and cruel law, rebellious Talia determines to build a new spinning wheel, the only one in the nation-which plays right into the evil fairy’s diabolical plan. Talia discovers that finding a happy ending requires sacrifice. But is it a sacrifice she’s willing to make?

So yeah, from the summary, I was, again, expecting something Shrek-ish (the first one, not those terrible, pop-culture-referencing sequels). A fairytale with modern sensibilities. The summary even made me laugh – “something to do with a curse on the princess” indeed. Yeah, that is not what The Sevenfold Spell is. Not really. There are glimpses of it towards the end, and those glimpses are where it gets interesting, but mostly, it’s a kind of depressing memoir of a spinster named Talia.

I’m kind of torn about how to feel about Sevenfold Spell. It started out promising enough – we’re introduced to a young woman named Talia, as she and her mother sit in the doorway to their shop, attempting to prevent a constable and “good” fairy from confiscating their spinning wheel. The scene has a wonderfully deadpan feel to it – the weary and exasperated constable is resigned to a task he doesn’t quite approve of that Talia and her mother are making difficult. The fairy is little but a bureaucratic representative, like a supervisor sent from home office to make sure a layoff goes smoothly. Talia’s mother screams and shouts in protest when the constable (easily)removes them, and Talia is mortified. I was highly amused, until I turned to page 2. That’s when I learned what the real conflict here would be.

“My daughter,” she said at one point, grabbing me. “Look at her. Do you think her face will ever get her a husband? That spinning wheel is her future.”

Oh, no, really? That’s what this is going to be about? And it is. Without the spinning wheel, Talia and her mother have no means of earning an income, which means that plain-and-warty (I shit you not) Talia has no means of getting a husband. Sigh.

But ah, Talia does have a fiancee, a childhood friend who (she thinks) has resigned himself to marrying her because he can’t really do any better (which, btw, is how we get around relationship development in this particular 73-page novella). They have agreed to marry, and are working on Willard’s father, who objects to the match. However, not long after their spinning wheel is taken, Willard visits Talia with bad news: his father has forbidden the marriage due to her financial status, and is sending Willard away to become a monk.

But then, the book really lost me – faced with the prospect of losing Willard and never marrying because she is just that ugly and poor, I guess, Talia pulls a 180 and seduces her not-fiancee for the purpose of conceiving his child. Seriously.

I was slapping my forehead here for a couple of reasons: 1) Talia is presented as a fairly naive, inexperienced, sensible, and somewhat mousy girl who has never done more than dance with a boy her entire life. Yet the moment Willard tells her he’s going away, she turns seductress. She asks him to kiss her with a “saucy lilt” in her voice, asks him to feel her up, and then invites him back for sexage that very night. They spend the next three weeks having awkward sex when- and where- ever possible, and at one point Talia even (loudly) fakes an orgasm for the benefit of Willard’s younger brothers, who’re listening to them boom-chika-wow-wow outside the barn. She encourages Willard to spread the word about his premarital conquest of her, and in the course of one chapter, intentionally becomes the town slut. I mean, what?

I’ve got no problem with people having premarital sex, okay, but this virgin-vixen turn is fast, even by romance standards. Far later in the book, she explains to Willard that she was trying to “deserve him” by building his reputation. I…what? Really? REALLY?

And 2) Pregnancy already, are you serious? I figure the point here is Talia’s teenage folly – she knows she can’t support a child, that it will face stigma as one conceived out of wedlock, that it won’t keep Willard from leaving, but she’s doing it anyway, specifically because her mother told her not to. That kind of frustrating stupidity nearly had me closing the book before it had even really begun, and if it were longer, I might have. But Hell, I was a quarter of the way through already, might as well see where this is going.

To be fair, aside from Talia’s stupidity, their three-week long affair does paint Willard pretty sympathetically. He really does love Talia, but is weak, and doesn’t have the will to disobey his father and run away with her. He tries to make their last few days of their time together like it would be if they were married, and even gets good enough in bed to make Talia come (the greatest gift of all). True to romance form, he puts effort into giving her an orgasm, therefore he is a stand-up guy. Except, you know, not, because he leaves.

As it turns out, Talia is barren, so she is left alone with no baby (the horrorz), and a horrible reputation. But that’s okay, because her mother promptly decides that they are going to build a spinning wheel, which leads Talia to decide that she will pay for the carpenter’s assistance in this project by becoming his mistress. She spends like a week progressively removing more and more clothing every time she sees him, and to his credit, she has to pretty much strip down to her skivvies before he gets it. He, too, is a “stand-up guy”, helping without narking, and even tolerating Talia enough to do it face-to-(warty)-face. Until, you know, they finish and he up and marries a younger woman.

From there, Talia says to Hell with it, and begins going to random bars to hook up. She stays with men for weeks or months at a time before moving on to a new one (she, by the way, apparently has a great body to make up for the bad face – that’s all that men are worried about anyway, right?). Again, I have no problem with, you know, the sex itself, but the reasoning behind the sex bothers me. Talia does it – and revels in her reputation – because she’s got no self-worth, and that is because she never got married. She says numerous times that she would have been a faithful wife if given the chance, but because she can’t be a faithful wife, she’s just gonna fuck around. She’s pretty much given up on herself because she can’t have a husband and children. That’s…great.

You can see how this whole thing might be depressing. I was expecting something light and witty and funny, and instead I get the life and times of a spinster with self-esteem issues. Not even the sex is good – the only scenes we get are with Willard, and they’re largely…well, awkward and fumbling.

Anyway, in between the carpentry and random bar-hopping, Talia becomes like an aunt to a new child in town named Rose. Yeahhh, you see where this is going. And you would be correct. She comes to love the beautiful, talented, graceful, but “simple” (as in -minded) little girl, as a substitute for the child she never had (AUGHHHH). She gets attached just in time for the girl’s guardians to discover that Talia has a spinning wheel, and abscond with little Rose into the night.

A few years later, Talia meets and bonds with a dazzlingly handsome nobleman, who is angsting over his arranged marriage to a beautiful, talented, graceful, but “child-minded” princess (yeah, yeah, you see). He loves her but refuses to marry her, and in the most porn-ish twist of them all, asks Talia to be his ~tutor in the ways of looooove~, so that his yet-to-be-arranged future wife (who will undoubtedly be a bitch because that’s how women are, right?) – and by extension, his men – will respect him. Because he can fuck well. Yeah, I don’t get how that works either.

Talia realizes who he is, that Rose is his intended, who she is, etc, and rejects his offer, because that would be creepy. She comes away from it with more self-respect (for…some reason), reconciles with her mother, stops sleeping around, and promptly develops tuberculosis. All that unprotected sex, I tell you. But finally, finally the fairytale elements start coming into play, and shit gets interesting.

The twist on Sleeping Beauty here is clever, and Talia redeems herself a lot through her self-sacrifice for the sake of Rose (who, naturally, is drawn to the only spinning wheel left in the kingdom in the last year the curse has to take effect). And naturally, because Talia is so self-sacrificing for the sake of her a child, she is rewarded with all the things a woman could want –

Note what comes first. I hope mental wellness is included under that general “health” heading, because really what Talia needs here is some self-esteem. Oh, wait, it took the warts away and gave her the ability to bear children, so we’re probably cool.

At any rate, Talia finally gets her happily ever after, and of course it must include her one true man.

There is some good stuff here – an amusing incident with the evil fairy and a broom, the twist on Sleeping Beauty’s awakening, the townsfolk’s less-than-enthusiastic reaction to possibly hibernating for a hundred years while their princess slept off her curse. Even the bit about the botched Sevenfold Spell-casting and how it affected Aurora was very interesting, and demonstrated that modern, practical take on a fairytale world that I was looking for. If the story had been more focused on that, and less on Talia’s sad sexual exploits, I probably would have liked it much more. But as it is, it’s about a young woman who is, let’s face it, leads a pretty miserable, unfulfilled life until she is given the means to reunite with her lifelong love and procreate. I mean, what kind of message is that?

On the other hand, the format was different at least, and you could hardly call it your typical romance novel, which is refreshing like you wouldn’t believe. And I’ll admit, I liked the fairytale aspect enough to keep an eye out for Tia Nevitt’s forthcoming takes on other classic stories. But they’re seriously going to have to lighten up for me to be in for the duration.

I went back and forth on this one, and I’m ambivalent at best. But…we’ll give it the benefit of the doubt.

Feel the rightness of them deep within you.