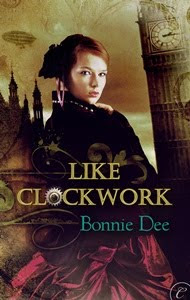 Victoria’s work with automatons has gained her renown and changed the face of London. But her concern that the clockworks are taking too many jobs away from humans, creating social unrest, is ignored. Given the ugly mood of the underclass, she fears more outbreaks of violence similar to the murder spree of the notorious Southwark Slasher.

Dash, unemployed thanks to the clockworks, has pledged fealty to The Brotherhood, a group determined to bring about the downfall of the automatons by any means necessary. His plan to kidnap Victoria goes awry when the unorthodox scientist pledges her assistance to their cause.

Despite their opposite social classes, a bond grows between them, and Victoria begins to feel emotions she never expected for the passionate Dash. But when the Slasher strikes close to home, Dash and Victoria realize that the boundaries of polite society are far from the only threat to their happiness…

Hey, guys, once again we’re back with Something Completely Different, where we take a look a books that don’t involve strictly supernatural hoo-ha. Today, we’ve got Bonnie Dee’s steampunk romance novella Like Clockwork, which caught my eye on netGalley with its kind of awesome (and, perhaps, Parasol Protectorate-inspired?) cover.

Perhaps I should start paying more attention to these books’ stats, because again, I was surprised by the page count. Like Clockwork is a scant 95 pages, and…well, fuck, you know what 95 pages means in a romance novel, right? Ding ding ding, you’re correct: Instant and Inexplicable Attraction! Our primary couple’s initial meeting involves the hero knocking out the heroine so that he can kidnap her, and almost immediately getting a stiffy as he makes off with her unconscious body. No lie. She’s just so hot unconscious! Our heroine responds by waking and dispensing with the whole “anger” formality pretty quickly. They’re soon bantering and trading life stories and confiding in and emotionally supporting one another because…the kidnapping was for a noble cause, okay. God.

Seriously though, I mean, I understand people can be instantly physically attracted to each other, but call me skeptical for thinking that they can form life-long bonds over the course of like three encounters. Or form instant emotional attachments to people who, say, have just kidnapped them. But this is me, beating the dead horse that is romance relationship development, and really, how many reviews can I do that on? It’s a romance novel romance, she’s attracted immediately despite the fact that he kidnapped her, he’s attracted despite the fact that she…er, helped create the automatons he despises? Yeah, that’s it. Also, they are from different classes and this is Ye Olde England, man, and that is a big deal. Moving on.

The plot and setting here are what caught my attention, and they’re not too bad, although they, too, suffer from the story’s brevity. It’s exactly as the summary describe: social unrest in the wake of the automaton’s creation brings our leads – gorgeous spinster scientist Victoria and criminal-with-a-heart-of-gold Dash – together, ostensibly to fight for justice, but really just to fall in love. In the background, someone is killing prostitutes Ripper-style (similarities intended, I assume), and someone close to Dash is murdered, inspiring Victoria to volunteer her information-gathering services there, as well. And…that’s kind of it.

To be honest, the plot doesn’t really go anywhere significant – the first three-quarters of the book set it up to be about campaigning for representation of the lower classes on the Commission that has authority over all things automaton, and uncovering the corruption that may lie within it. Victoria is warned by her mentor that the Commission may be spying on the scientists responsible for creating the machines (including her), maybe even killing them to ensure they don’t speak out against them. There is noise of a conspiracy, and on Dash’s end, noise of a rogue faction getting a little too extreme in their automaton protests. But none of it really goes anywhere.

The climax of the book is exclusively devoted to the discovery/fight with the Ripper Southwark Slasher, which comes out of nowhere, seriously. One minute we’re angsting about Victoria and Dash overcoming social obstacles to embrace their TRUE LOVE – oh, and the Commission spying or something, IDK. The next, OH HELLO THAR SERIAL KILLER PERSON. That being said, it was actually a pretty decent conclusion to the Slasher subplot, and I didn’t see it coming. Although, considering how little “screen time” the murders were given, that’s not exactly a surprise. Hell, the heroine wasn’t even looking for the Slasher when she found him. She literally stumbled on to the ending. What an extremely unfortunate happenstance.

Anyway, Dash fights the Slasher to protect frail little Victoria, who, as both a woman and scientist, can hardly be expected to save herself. He wins, they declare their undying love and…that’s it. The rogue faction of the Brotherhood was just a red herring, and the Commission’s misdeeds apparently come to light in the five-month lapse between the final chapter and the epilogue.

Wait, what? WHAT? D-did we just resolve our primary conflict off screen? Did I lose like half a book somewhere? WHAT? We get an abundance of information about what the Commission got busted for and a bit about how their undoing has affected society, but we don’t see any of it. All the action in the (rather long) epilogue is reserved for all the sex that couldn’t be shoehorned into the novella proper.

Which, actually, I found rather funny. Instead of following the traditional Romance Novel Sex-act Progression over the course of the book, the author settled for stuffing everything into the epilogue. I appreciate the restraint in-story, because there was no way of realistically working sex in, given the setting and timeline, but it still makes me laugh. An epilogue exclusively for the purpose of fast-forwarding past the boring plot-resolution stuff and having sex. Oh yeah, and marriage! And the man’s first utterance of the phrase “I love you” as he comes, even though they’ve been married for months and she says it all the time. Oh, and to complete the package, Victoria ponders pregnancy as her dear husband climaxes inside her. Classy.

My God, is there like, some goddamn checklist somewhere with plot elements that romance novels must have in order to get published? I was joking about the Sex-Act Progression Chart, but with all the sameness in these romance novels so far, I’m starting to wonder if publishers don’t pass this stuff out.

Aaanyway, sex-pilogue aside, you know what this book reminded me of? A lost, stand-alone Doctor Who episode. We’re dropped into the middle of a conflict, with a character of some significance to it, and careen through this rapid-fire sequence of events, which get us up-to-date with what’s going on just in time to BAM, run face-first into the bad guy and resolution. Plus, the identity of the Slasher is a Doctor Who-ish twist if I’ve ever seen one, creepy dialog and all. I can literally picture the bad special effects that would make up the climactic battle in my head, with any one of the Doctors in Dash’s place. In fact, I might have seen glimpses of it before. That’s not a band thing. Doctor Who is nothing if not entertaining.

As romance novels go, it’s not bad. In fact, it’s probably one of the better Carina Press titles I’ve read so far. The characters are tolerable, for a romance novel. Their relationship, while rushed, feels authentic enough. For a romance novel. The setting is exciting, and the plot is genuinely interesting…until you realize they can’t possibly develop and resolve everything they’ve introduced within the given page count.

All in all, I find myself wishing that a) this weren’t a romance title, and b) that it was longer. It feels incomplete, and while I doubt we would have gotten any ground-breaking insights (robots are bad, blah blah), it seems like a wasted opportunity for a fun ride. Still, as it is, it’s a quick, decent romance read.