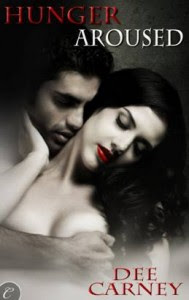 Jasmine is sick in bed when a sexy stranger breaks in and reveals she’s suffering an irreversible case of vampirism. And because her turning wasn’t approved by the Council, he must kill her once the transition is complete. In the meantime, the executioner offers to ease her torment with chocolate, hot peppers or sexual release. Fortunately for them both, Jasmine’s kitchen is bare…

Corin’s honor demands he do his duty, but he cannot execute the lovely woman while any part of her humanity remains. He must also find – and kill – her sire. Jasmine denies ever having contact with a vampire, causing Corin to question the justice of his orders. Sensing his hesitation, the Council dispatches another executioner, forcing the pair to make a run for it.

Every hour they spend together – every sensual encounter they share – finds them growing closer. Now Corin will have to choose: kill the woman he loves, or go against everything he believes to set her free.

Oh hi, btw, this book is EROTICA so the following review could be considered R – X rated

Man, I really need to stop reading these erotica books, because I’m still not sure how I’m supposed to critique this. In fact, this may be my last one. Unless I’ve already requested more from NetGalley. Crap.

To be fair, while Hunger Aroused‘s story is pretty much your basic hardcore romance set in bland Generic Vampire World A, it’s also one of the least crazy/thinly-veiled excuses for stringing together sex scenes that I’ve read so far. Granted, my experience with ‘erotica’ is limited to four books, but hey, I’ve still read dumber. Then again, if we’re to judge erotica on different standards, perhaps this book’s restraint and blandness doesn’t work in its favor? I mean, where a story about a reformed vengeance demon whose split personalities must be integrated into one healthy persona by her two bisexual werecat lovers via sex might be a laughable concept for paranormal romance novel, as paranormal erotica, it’s…well, still laughable, but at least serves its purpose in providing a wide range of diverse and pretty wild sexual encounters.

Hunger Aroused, on the other hand, is more restrained with its storyline, characters, and setting, but suffers from, again, serious blandness and a distinct lack of variety. Of sex, in case that wasn’t clear. The most extreme our two leads get is sex on an open street at like 3 a.m. (sex with a stranger notwithstanding, since that seems to be an erotica must). That’s pretty kinky in the real world, but after reading about demon-werecat threesomes and wingering (angels – think about it. And no, I’m not kidding), it’s almost quaint. I’m not saying you have to involve other parties or species or anything, but when the Sookie Stackhouse series has hotter sex scenes than your erotica novel, perhaps you should rethink your genre.

So, if it doesn’t deliver on its most basic level, can an erotica book still be considered good? Maybe with a solid story and characters, but I didn’t really get that with Hunger Aroused, either. You’ve got Corin, a former gladiator (yes, really) turned executioner for the vampire Council who is sent to kill Jasmine, an ER nurse who happened to get stuck with a needle contaminated with vampire blood, and is now turning into one herself. Of course, creating unauthorized vampires is against the Council’s rules, but it wasn’t her fault, and Corin takes pity on her. They proceed to go on the run and have lots of sex for no good reason, except that the process of turning into a vampire makes you incredibly hot, and only sex can ease the pain. Naturally, by the end they have fallen in love, and via some tricky logic, manage their happily ever after.

If you’re still with me after that barrage of links to one of the most addictive sites on the web (and that ridiculously blatant plug), yes, the plot really is that generic. They throw in an evil ancient vampire scientist who thinks Jasmine might be a new breed of vampire and wants to study her, but it doesn’t really amount to much. The unavoidable conflict here was always the Council and their unwillingness to allow Jasmine to live, so my only explanation for the mad scientist detour is padding.

The kicker for this book, for me, was the climax (heheh), and the ridiculously flawed reasoning involved in it. The Council refuses to let Jasmine live, despite the fact that she hasn’t really broken any of their laws. However, they will let Corin live if Jasmine dies before his allotted kill time has expired. If she is alive after this, he will have actively defied the Council, warranting death (despite openly stating to their faces that he has no intention of going through with the hit. Um…okay). So, knowing him for all of three days and DESPERATELY IN LOVE, Jasmine decides she is going to kill herself to keep Corin alive (remember this!), and proceeds to stab herself until she bleeds out. Now, this won’t kill her, but apparently technically kills her enough to alleviate Corin’s guilt so that he can stake her in the heart, which will actually kill her. So yeah, she cuts herself up and though Corin protests, he doesn’t physically restrain her. SERIOUSLY. She’s a newly turned vampire, and you’re ancient, dude, I’m sure you could take the knives from her if you really wanted to.

Anyawy, Corin then makes a deal with his maker/rapist, (who only then reveals himself as a Council member), trading his servitude for the absolution of Jasmine’s “crimes”. He then revives her, right, but when she realizes what he’s traded for her freedom, Jasmine blackmails his maker into letting them go. How, you ask? By threatening Corin’s life. Basically, Corin and his maker are ‘mated’, so if Corin dies, his maker might, as well. Jasmine states that she would rather see Corin dead rather than living in servitude to his maker. And this isn’t an empty threat either, btw. She seriously means it. So the guy lets them go.

UM HI THERE, CONTINUITY? Remember how Jasmine just SLICED HERSELF UP to preserve Corin’s life? And now she’s bargaining with it? WHAT?

And yeah, to complete the “womanly fantasy”, despite being TURNED INTO A VAMPIRE IN THE END, the heroine finds out it’s still possible for her and her true love to procreate. Because vampires aren’t dead silly, what POSSIBLY GAVE YOU THAT IDEA? UGH.

Leave a Reply to Shiori @ Panic in the Lingerie Cancel reply