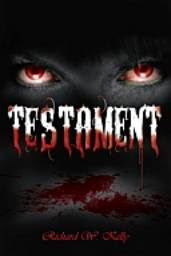 The police had a lead for the double murder at the gas station on Melor Avenue that night.But why was Thomas, the store clerk, still missing?

After the shooting, Thomas, motionless on the floor, felt the warmth of his blood as it poured out from the wound on his neck. What was that unholy creature with the long black silky hair, he wondered, that had seemed to float into the station just as the shooting had ended?

Before that night Thomas had been living the life of a lazy man, afraid of failure. His disheveled two bedroom apartment and the filthy gas station he worked at from midnight to morning were close reflections of the depraved inner world he inhabited.

All of that was about to change.

Wandering the city, searching for answers, he was about to find his God.

So, to start out this review, we need to explain that the author himself sent us signed copy for review of this book. We were more than excited about this, considering it was our very first free, signed review copy, and we appreciate the author’s generosity. But we promised to give an honest, blunt review, same as we’d give any other book, so it is with heavy hearts that we have to say…

There is almost nothing in this book that we can recommend. The main character, Thomas, is an unlikeable fanatic lunatic, who we seriously suspect is just literally insane. Reading from his point of view left us questioning our own sanity, and in need of a shower. The writing is tedious to read, with awkward and repetitive phrasing. And the whole story has this underlying feel of fanatic, old-school eye-for-an-eye Christianity that kind of creeped us out.

But anyway, our hero. The entire opening chapter is devoted to describing Thomas’ apathetic lifestyle; he refuses to bath or clean his apartment, his social interaction is limited solely to strippers, and at work…well, we’ll let him explain:

He was not concerned with customer satisfaction or the cleanliness of the store itself. In fact, he was constantly playing two games in his head.

The first was a counting game where he would see how many times a customer would ask for help before they decided he was either deaf or rude.[…] The second was a guessing game that centered on trying to see how much dust and dirt could collect around each customer. He had a person at one point that literally had a dust bunny that covered his entire shoe. This game almost felt like watching art.

He spends the next three paragraphs describing the dust.

The point is that the guy is an unlikable douche, and he is supposed to be. The problem is that everything that happens after his transformation seems like it’s supposed to be an improvement – Thomas fulfilling his destiny. But it’s not. He becomes a psychotic, serial-killing Jesus freak.

In a nutshell, the premise is this: Thomas is turned into a vampire, decides that God has given him a second chance at life, and takes it upon himself to rid the world of thieves by murdering them for God. In the meantime, he abandons his old life to live in a church – well lurk in a church…basement….not sleeping…being transparent (literally – see next paragraph)…creeping out the priest…and stalking a parishioner…for Jesus. Primarily because being in the church robs him of his supernatural abilities, and he likes this.

Oh, and speaking of world-rules, the vampires of Testament are literally transparent. The longer they spend as a vampire, the more you can see through their skin to their musculature, like creepy, cave-dwelling fish. The book explains it like this:

The creatures can not hold pigmentation in their skin nor eyes. Their entire existence is the constant dispelling of their pigmentation.

If someone could tell us what the Hell that even means, we’d be grateful.

(That little gem is from Known Vampire Biology, btw, which is a real book in Testament!world. We get vampire fun facts from it between every chapter, usually providing information we already learned several pages earlier. It’s not redundant at all.)

Anyway, a year later, Jack shows up. Jack is Thomas’ maker (the aforementioned silky haired creature that attacked him after the robbery), and after a year of observing Thomas from afar, he decides it’s time to step in and answer any outstanding questions he might have. Initially, he tries to mentor Thomas (which involves sharing a chapter or so of his own origin story), and steer him away from his habit of murdering humans, but out hero isn’t having any of that nonviolence nonsense, so Jack cautions him to at least keep the vampiric involvement under wraps, since there are the Volturi vampires out there who don’t want attention being drawn to their existence. Also, they are very anti-religious. Thomas completely ignores him takes it under advisement, and life goes on.

To be honest, we liked Jack…sort of. He thinks Thomas is annoying, and anyone who doesn’t like Thomas is cool with us. But then he starts buying into Thomas’ crazy, and our respect for him wanes. Damn.

Another year of nothing happening later and Thomas has escalated to the point of leaving notes for the police. In an attempt to distract and deter him from his Holy Mission, Jack kidnaps that parishioner Thomas has been stalking for the past two years. To be fair, they have had some awkward and creepy interaction, during which they might have fallen in love…ish. We don’t know, it’s all very unhealthy and co-dependent (insert requisite Twilight joke here). Anyway, she’s a frighteningly skinny woman named Lilith (we were totally waiting for the other shoe to drop with that name, btw, but it never does) who cannot cope with her grief over the death of her son, and whose only desire is to die so that they can be reunited in Heaven. Pay attention, kids, because this becomes something of a plot device later on!

At any rate, for some reason her kidnapping inspires Tom to lead the cops on a city-wide high-speed chase and pull an Edward Cullen at City Hall, as he tries to proclaim that he is a vampire in front of the entire city. Jack shows up at the last second, literally carrying Lilith under his arm, and they go on another chase before he can totally out himself. Hilarity ensues, as Lilith is dragged around the city like a rag doll, body clipping buildings and poles and stuff. It’s great.

Jack leads Thomas deep into the sewers, to the big bad’s lair. Guess who that is? Cain. No really, Cain. You know “Cain and Abel”? That one. In Testament‘s world, he is the Granddaddy of all vampires. This would have been kind of cool in any other book, but here, among the creepy characters and awkward writing, it feels wasted.

Like most big bads, Cain feels the need to monologue his backstory to Thomas while Lilith, broken and bloody from the run through the city, lies dying on an alter. It’s actually a pretty interesting twist on the age-old story of Cain and Abel, and kind of makes God look like a dick, and Cain less so. It ends with Cain and all his offspring being banned from Heaven until they – and we quote – “take the hand of Christ and accept it into their bodies”. Cain is apparently stupid and interprets this as them literally needing to eat Christ to redeem themselves, because that…makes sense? And having missed Him the first time around, Cain has resigned himself to waiting for Jesus’ Second Coming…so he can eat him. PAY ATTENTION BECAUSE THIS BECOMES IMPORTANT LATER ON. If you’ve had any experience with Christianity at all, you’ll have guessed how.

Moving on, Cain yells a lot about God asking for unreasonable things and never granting second chances and how he’s a much better father than God ever was, and why doesn’t Thomas convert to the church of Cain, because they have cookies. He then demonstrates his fatherly “mercy” by changing Lilith into a vampire and giving Thomas a second chance to live happily with her, as long as he doesn’t cause any more trouble or attract any more attention.

Jack, Lilith, and Thomas form a happy little coven for a couple of days, until their high wears off (because Cain is like a happy drug to other vamps, WELL OBVIOUSLY). Yeah, remember how we said Lilith was obsessed with being reunited with her dead son? Well so does Lilith, and (in the course of like two paragraphs) she comes off her cheerful sex-craving high, decides that being an immortal undying vampire banned from Heaven isn’t conducive to that goal, and proceeds )and fails) to TRY AND KILL HERSELF. Thomas decides that Lilith’s misery is all Cain’s fault, and he must die. So they lure him into their old church, where he will be mortal(ish) and easier to kill. A knock-down-drag-out fight ensues, and Lilith gets mortally wounded in the process, but they manage to behead Cain. He doesn’t die, though, he just…exists the rest of eternity with no head. FANTASTIC.

And then comes the biggest, most stupidly obvious plot twist in the history of ever (no lie). Remember the whole “must accept the hand of Christ” term in God’s no-Heaven contract? Remember how that sounded an awful lot like baptism and communion, which anyone with experience with Christianity would have realized the moment they heard that phrase? Guess what? IT IS. That’s how you save a vampire, same as how you save anyone else: baptism and communion. I guess Cain’s never shared this particular term with a Christian (or they were all morons), or studied up on the FUNDAMENTAL TENETS of that religion he hates so much. Oh, yeah, and they NEVER OFFER THIS OPTION TO CAIN. Because why try and help your enemies, eh? They don’t deserve Heaven anyway, better just to get rid of them.

So yeah, Lilith (already a Christian) gets around Cain’s thousand-year road block by taking communion. She dies and goes to Heaven, even though technically she could have healed herself by leaving the church. So what she did could be considered suicide – a MORTAL SIN – and put her in hell, but I guess they overlooked that one this time. Thomas and Jack survive and decide that their new mission is to teach their fellow vampires about God and how to be saved. THE END.

We’d like to take this opportunity to mention that Thomas never pays for being a serial killer. He returns the bodies he’s been hiding for TWO YEARS to give the families closure, but that’s it. He never says a word about how this could have been wrong, or that he’s y’know, SORRY. OUR PROTAGONIST, ladies and gentlemen. It’s okay though, I guess God is cool with SERIAL MURDER as long as you spend the rest of your life evangelizing in His name.

We really shouldn’t have to explain anymore why this is a bad book. It had a few good ideas, interesting origins, but the horrible writing, psychotic characters, and underlying extreme religious themes totally sank it.

By the way, this book contains our favorite ridiculous term of all time:

…he left his eyes open in case he was suddenly confronted by an angry biblical figure.

As we’ve mentioned in Tuesdays gone by, this line comes from the scene where Thomas is waiting in the church to be attacked by Cain, and he is completely serious. This is great and should be on a t-shirt. BEWARE: ANGRY BIBLICAL FIGURE.