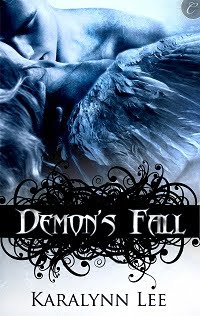 She was an angel at the gates of Hell.

When Kenan, an incubus, finds a caged angel for sale in the Hellsgate marketplace, he sees her as a challenge. Certain that his skills in seduction will work as well on a heavenly creature as they do on mortal women, he buys Jahel, intent on having her soul as a novelty in his collection.

Knowing he must gain Jahel’s trust if she is to come to his bed willingly, Kenan treats her more as his guest than as his slave. When she reveals what brought her to the mouth of Hell in the first place-retrieving the soul of a young girl she was guarding-he even offers to help her complete her mission.

Though he has promised Jahel freedom, Kenan soon realizes she has captured his heart instead. And as their passion for one another grows, they find themselves caught in a struggle between Heaven and Hell, one that will lead them to the very edge of the apocalypse…

What the summary doesn’t tell you about Demon’s Fall is that it is short. Very short. Like 75 pages short. So there’s not a lot of room for development, or a very complex plot, or, more importantly, any relationship development at all. To say the angel in this story gives up easily is an understatement. They’re together for all of a half-hour before she’s rubbing up against him like a love-struck cat, despite the fact that he, you know, bought her. And our male lead here, Kenan, doesn’t do much but kiss her before he decides he’s head over heels in love. It’s never really explained why, either. I mean, he says multiple times he’s been with thousands of women (again and again, they sing the same tune…) and doesn’t find her particularly attractive. And then they kiss and he’s gone on her.

Um, okay. I’d harp on this more if this were a novel-length book, but what can you say when it’s a 75-page novella and we need us some sex, okay? But not just any sex, the sex of two people in ETERNAL LOVE.

Plot wise, they actually do a lot for something this short. Well, I mean, lots of stuff happens. None of it is particularly important, and is on the level of an A budget porn (complete with naughty fairytale twists – did you ever want to read about the Queen from Snow White getting drilled by an incubus while his angel not-girlfriend watches? Then this is the story for you!). They start out trying to help the angel (a guardian angel, apparently) reclaim the soul of her ward – Snow White, I shit you not. But then they do that and…had fifty more pages left to fill, I guess, so they get stuck having to stop the apocalypse, too. To kill time, I’m sure. The apocalypse part would probably be more interesting if it were actually developed. Also, Lilith shows up, too, just for good measure.

Actually, I found the world to be the most interesting part of the story. There’s the town of Hellsgate, a border town between the “mortal realm” and Hell, which houses a mixture of demons and humans. Heaven has its equivalent, which we see in the end, and I thought the difference of attitudes of the people in both towns was a nice touch. Uhhh, let’s see, what else? Oh, souls are actually coins that can be traded (like demonic pokeballs) for goods and services, or other souls. There are “lost” beings – angels and demons who took human form and can’t get out of them. I would have liked to know more about them.

Also, there are giant, fiery hellhounds, and they talk. So do the demon horses that belong to the Riders of the Apocalypse. They also enjoy apples.

To be fair, Demon’s Fall does have a pretty light tone, which I’d suppose you’d have to when writing fairytale villains and talking hellhounds with a heart of gold and the Horseman War into the same story. We take it all in stride. I found the dignified talking demon animals to be the best part of the story, but that might be because dignified talking animals are a weakness of mine. Don’t tell anyone.

The characters were all pretty bland, and did I mention that the angel doesn’t seem to have much of a problem with demons? I guess it’s refreshing to not have them hissing at each other on sight, but she was significantly less naive and uptight and prejudiced than I expected. She also allowed herself to be talked into trading one person’s soul for another pretty easily. Nice.

Also, I can’t help but wonder why, in a story this short, they insist on perpetuating the cliche’d misunderstanding between lovers that results in someone going off hurt because they think their lover is into them for some other, not TRUE LOVE reason. It’s never true, and in this case, the angel literally comes right back a page later. Pointless.

All in all, it wasn’t…bad. Well, I suppose it depends on your definition of bad. It was short, there was sex, it was adequately hot, and the setting was reasonably interesting. I guess there’s not much more you could ask from a book like this.