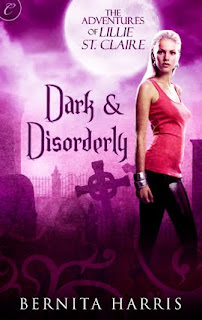 Lillie St. Claire is a Talent, one of the rare few who can permanently dispatch the spirits of the dead that walk the earth. Her skills are in demand in a haunted country, where a plague of ghosts is becoming a civic nuisance.

Those skills bring her into conflict with frightened citizens who view Talents as near-demons. Her husband comes to see her as a Freak; so when Nathan dies after a car crash, she is relieved to be free of his increasingly vicious presence. Lillie expects to be haunted by Nathan’s ghost, but not to become Suspect #1 for her husband’s murder and reanimation.

But what’s most surprising of all is the growing attraction between her and psi-crime detective John Thresher. He thinks that Lillie killed Nathan — and Nathan must agree, because his zombie is seeking revenge. Now she and Thresher must work together to solve her husband’s murder — before his corpse kills her…

Dark and Disorderly is another digital review copy we got from netGalley, which I picked up in a concentrated effort to read something not written for teenagers. It was published by Carina Press, which is a branch of Harlequin that exclusively publishes e-books, so I guess that’s about as far away from YA as you can get. I’ll be honest, it took me a while to get into this book, and I’m pretty sure positive it wasn’t the lack of teenage protagonists…

Ok, I’m gonna say this now and get it out of my system: my biggest issue with this book was the love interest. What a great big condescending overbearing wishy-washy douchebag. I absolutely could not get into the romance aspect of this book, and Sgt. Johnny Thresher is the reason why.

Granted, I had a hard time connecting to Lillie. Maybe because there wasn’t really anything I found I could relate to in her. That’s not a fault of the author’s – we’re different people, and though I couldn’t really relate to Lillie, I found I respected her, for the most part. I actually might have been able to ship her and a couple of different cast members. But no, our love interest is Sgt. Thresher, who spends half the book suspecting – or outright accusing – Lillie of being a murderous liar, the other half flirting and trying to make out with her, and nearlyall of it keeping things from Lillie that are quite relevant to her life-or-death situation. He then has the nerve to consistently treat her as though she is a silly, stubborn, petulant child when she gets upset at his accusations, lies, and mood swings.

I didn’t feel any chemistry between the two – perhaps because almost every conversation they have ends in a fight, and Thresher’s aforementioned condescending dick routine. I mean, seriously, at one point he even suggests that he should spank Lillie (in a totally non-sexual, exasperated way) when she has the audacity to think for a moment that he might mean her harm. On more than one occasion, he totally ignored her requests for him to leave her presence and/or physically prevented her from leaving his, and then went about his business (ordering pizza, having her make him coffee) like he wasn’t explicitly going against her (unreasonable, emotionally-motivated, womanly) wishes.

It doesn’t help that every physically intimate moment (except for the last one) is immediately preceded or followed by Thresher physically confining Lillie in some way. After she breaks out of their first kiss, he pins her to the side of a car and rubs her hand over his chest and down to his belt, despite the fact that she is uncomfortable and uncertain. The second time he kisses her, he has to literally hold her in place, and she bites him to get away. He then has the gall to say “don’t pretend you’re not attracted.”

But even before that, what cinched my dislike for Thresher was his reaction to finding Lillie alive after she is believed dead in a car accident. He runs up and holds her, thanks God she’s alive, and then backs off and accuses her of rigging her own accident for attention. She easily points out the holes in his theory, and rightfully gets mighty pissed off, since this car accident was actually an attempt on her life. But he only gets exasperated at her (TOTALLY UNWARRANTED, RIGHT?) angry reaction.

In the same scene, he casually suggests, because of some ligature scars on her wrists, that she is into kinky sex, even though it’s implied that he also knows that they were actually the result of Lillie’s husband tying her up against her will and raping her.

WHAT PART OF THIS DOES NOT SOUND LIKE RAPIST MENTALITY? HOW ARE WE SUPPOSED TO LIKE THIS GUY? At the very least, he has absolutely no respect for the heroine. I mean, I could understand suspicion; he has to approach the situation like a cop, unbiased and prepared for the possibility that Lillie could be a murderer. Fine. But even if he were totally on Lillie’s side through it all, romantically he’s still a condescending, over-aggressive dick.

I actually respected Lillie for the longest time for the way she handled this guy. She got pissed off at him on a pretty regular basis, and I really feel that she was justified 95% of the time. I was proud of her for biting him when he kissed her, refusing to run away when he told her to (in times of conflict she stayed and kicked ass right along side the guys), and having some pride – she never bent to his will or supposedly better judgment. But this independent streak loses a lot if its credibility when she immediately chastises herself for not following his advice. Though it’s usually perfectly reasonable to go against his will, it quite often gets her into trouble that she has to be rescued from.

Why? Why are women with backbone so often portrayed as being foolish or obstinate for not going along with the man’s advice? And why is the man so often right, even though there’s no real reason that he should be?

Anyway, Lillie was way too forgiving of Thresher for my taste. I suppose if she weren’t, there’d be no romance (THE HORRORZ), but her forgiveness and rationalization of his behavior lowered my opinion of her.

Story-wise, I found Dark & Disorderly a little meandering. The core plot had to do with the death of Lillie’s husband and the subsequent resurrection of his corpse, but there was a lot of padding and detours taken to explore Lillie’s job as an exorcist working for the county. I actually didn’t mind the detours themselves – I enjoyed reading about a day in the life of a ghost buster in a setting where the exorcism of spirits has become kind of bureaucratic – but there were so many of them that it distracted from the main storyline and confused things. I was never sure what was going to be relevant to the overall plot and what was just another of Lillie’s sidequests. Them there were a couple of entire subplots introduced that took up a good chunk of the book and are apparently going to stretch through the series – now those were confusing.

Then there was the constant separation/reunion of Thresher and Lillie. We would have Lillie drop Thresher off at the station, only to have him visit her at home a few pages later. This happened every few chapters, and though I can see the need to portray them going about their daily business and not being together all the time, it could have been done a little less awkwardly.

I’ll be honest, the big plot twist you can see coming a mile away. Once Lillie reveals a certain tidbit of information about halfway through the book, it’s pretty easy to see where it’s gonna end up. The way Lillie herself sleuthed it out was impressive, though, and I liked that she figured it out on her own (though apparently Thresher knew ALL ALONG and didn’t say anything, what a champ).

The climax was pretty action-packed, and I could appreciate that ultimately the motivations were very…human. It’s a nice break from the usual grandiose villain scheme, if somewhat Lifetime-thriller-of-the-week. I will say that it relied a lot on convenience (good thing Lillie decided to investigate that one particular case, eh?). The very end also felt somewhat abrupt, though, like an epilogue that got cut short.

I noticed the dialog was kind of off, too. Both Thresher and Lillie spoke more the way you would write – very properly, with lots of big, awkward words – and that was very distracting. Then some of the crazy or bitchier characters (all female, btw) put strange emphasis on their words that I could just not hear for the life of me.

All in all, I’ll say this – I liked the idea. It’s an intriguing world, and I’d love to know more about the Talents and Lillie, where they come from and why the world is the way it is now (Lillie mentioned some pretty interesting theories), and I hope that’s something Ms. Harris tackles in future installments. I’m curious to know about the Irish folklore involved, and see some expansion of characters I liked (such as Ted, and maybe even the late Chief Secord, both of whom are infinitely preferable to Thresher).

However, I had some trouble getting into the book. I was never totally invested in the heroine, the dialog took me out pretty frequently, and wow did I not like Thresher. I think the series would be vastly improved by his removal, lol. Once I did get into it, I really didn’t see much by way of innovation. I might be curious enough to pick up the next installment (if there is one), but I wouldn’t say it’s at the top of my To-Read List.