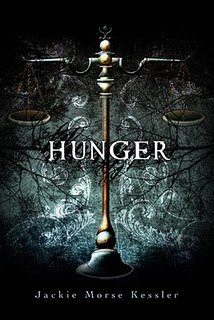 Thou art the Black Rider. Go Thee unto the world.

Lisabeth Lewis has a black steed, a set of scales, and a new job: she’s been appointed Famine. How will an anorexic seventeen-year-old girl from the suburbs fare as one of the Four Horsemen of the Apocalypse?

Traveling the world on her steed gives Lisa freedom from her troubles at home – her constant battle with hunger and her struggle to hide it from the people who care about her. But being Famine forces her to go places where hunger is a painful part of everyday life, and to face the horrifying effects of her phenomenal power. Can Lisa find a way to harness that power – and the courage to fight her own personal demons?

A wildly original approach to the issue of eating disorders, Hunger is about a struggle to find balance in a world of extremes, and uses fantastic tropes to explore a difficult topic that touches the lives of many teens.

So, confession time: I requested and read this book in spite of its core issue. I’m all about the Apocalypse and a new take on the Four Horsemen, but when I read that Hunger was really about anorexia, my hopes were dashed. Oh no, I thought, a Very Special Episode of YA paranormal lit, about the horrors and dangers of anorexia! Necessary, sure, and I could admire the author’s creativity, using the youth of America’s current obsession with paranormal fiction to lecture them on the dangers of starving themselves, but it was definitely not my bag. I was on the fence about even reading it for a while, but in the end, curiosity about the Horsemen made me to crack it open. Still, I expected to roll my eyes and laugh. A lot. But you know what? I didn’t. Not once.

Hunger is actually a decent book. Yes, it is undoubtedly about anorexia, and any mythology and world-building of the fantastic aspect takes a backseat to exploring and conquering Lisa’s eating disorder, but that doesn’t make it a boring or tedious read. The writing and characterization were very strong. Kessler did an excellent job of tackling the subject – and her heroine – without any patronizing or condescension. Even if you’ve never had any real experience or trouble with anorexia, you’re very quickly sucked in to her mindset and come to understand her struggle.

I actually did learn a lot about anorexia, which I’m ashamed to say I didn’t quite understand or sympathize with before. But Kessler’s description of Lisa’s mental state is very genuine and rang true, and you really see how, in some ways, Lisa is a prisoner of her own mind (some of the portrayal of Lisa’s illness actually reminded me a lot of OCD, which I do have some understanding of, so maybe that helped), but at the same time, she also doesn’t cut Lisa any slack. It’s clear from the start that all Lisa’s excuses and justifications are false, that she did this to herself, and that ultimately it is up to her to stop.

Still, Lisa is a very sympathetic and actually likable heroine, so even in the stretches where there is nothing paranormal going on, and you’re reading about her home life and internal battle with food, I, at least, was invested enough in her character to care about how she dealt with it. I honestly never found myself getting bored.

Lisa’s journey progressed pretty well, and her development felt natural, as she went from denial about her problem to disillusionment, to strength. The whole point was for her experiences as Famine to impact the way she thought about food and her disorder, and that actually worked without getting overly melodramatic or sappy or preachy, thank God. When they went the route of ‘visiting places Famine has touched’, I was a bit afraid of getting a Christian Children’s Network-esque look at the world, but Kessler actually avoided any guilt-tripping. The whole experience was very much about Lisa, and her personal ability, as Famine, to end suffering, and you rejoiced with her when she could.

Those visits became my favorite part of the story, because they were more about Lisa’s powers, and her struggle to understand them, as well as her role as a Horseman. I was really getting into the book towards the end, where Lisa had her epiphany and started using her powers for good, culminating in her fight with War. Like I said, I went into this for the paranormal action, so even though the anorexia parts weren’t bad, it was nice to have a break from that in the form of good, old-fashioned bad-assery. My greatest wish for this book is that they had done more with that, actually. I mean, I understand that that wasn’t really the point of Hunger, but I would love to have a look at the Horsemen and their powers and their roles in the world, sans emotional baggage. Also, I sort of assumed when they mentioned Lisa becoming a Horseman of the Apocalypse that there would be some apocalyptic action going on. Not so. Apparently the Horsemen are around, traveling the world all the time, and not just during the end times. SIGH.

Aside from Lisa, the side characters – her boyfriend, friends, mother, father, Death, Pestilence, and War – aren’t extremely well developed (which, again, is a shame in the case of the Horsemen). I understand, though, because this is Lisa’s story, and for the vast majority of it, she cuts herself off from most of her friends and family. And from what you do see of them, her boyfriend and friend are respectable in their concern for Lisa, and their insistence that she get help from her problem. Plus, you get subtle glimpses of the type of person her father is (I kept expecting her anorexia to have something more to do with her father, somehow he seemed…off to me), and not-so-subtle looks at who Lisa feels her mother is. But you also get the sense that, in some of this, Lisa’s perception could be off (I loved that – we all see people through our own filters, and it’s nice to see this hinted at in a book). There’s some nice closure with her mother in the end, and hope for the renewal of that relationship. Her father is probably still an alkie though.

Kessler also did a nice job with the handling of Tammy’s character. You see what a bad influence and how troubled she is, and you don’t like her, but in Famine’s look at her bulimia, you do feel sympathy for her. That whole matter of their friendship was sort of dropped though, and it would have been nice if there had been some mention of Lisa helping Tammy in the end. She clearly needs it.

Hunger had a pretty different twist on Death in this book (I’m always fascinated by Death personified, he almost never fails to be interesting), but the author totally failed at conveying his scariness. You had to keep being told that he was scary, because in-book was mostly charming and sarcastic and not the least bit intimidating. And also Kurt Cobaine, lol wut? That was distracting. Fangirl much, Kessler? Anyway, I did like the bit of sadness we saw in him after the ordeal with War, and it gives me hope for some development in his character in the next installment in the series, which is all about War.

For all its realism in handling Lisa’s psyche, I did find it a bit hard to believe that, even with her mother’s prodding, Lisa snapped into anorexia because she was worried about not being good or pretty enough for her boyfriend. She was fine when they were friends, but then they start dating and BAM – anorexic. Buuuut I’m not an anorexia expert, so maybe it just happens like that some times. IDK. Also, there were some touches of melodrama (and melodramatic phrasing) in the supernatural aspect of the story, but they were, for the most part, acknowledged or balanced out by the author with little quips or amusingly ineloquent reactions and thoughts.

Finally, this book can be depressing. SERIOUSLY. And gross. I read it while eating (lol IRONY), and wow was that meal not fun. I mean, I suppose that’s natural since it’s about anorexia and famine and all, but damn, what a downer. Especially the first half. The tone shifted a bit as Lisa became stronger and more hopeful and comfortable in her role as Famine, but even that all came crashing down at the end, as Lisa’s new-found strength crumbled once she made her final decision about her role as a Horseman. LOL HI ABRUPT TONAL SHIFT.

OK I TRIED TO AVOID IT, BUT THERE ARE GONNA BE SPOILERS, SKIP THIS PARAGRAPH IF YOU DO NOT WANT.

I really wish that Lisa had made a different decision – she became so strong and confident and badass, I would have loved to see more books about her as Famine. Plus, I mean, yeah, the book is all about her conquering her illness, but now all the progress she made with her powers as Famine are entirely pointless. I really didn’t see any reason that she couldn’t continue on as a Horseman while also living her normal life – we could have gotten a superhero out of this deal! Plus, what if the next Famine is an asshole, and doesn’t do all the things Lisa did to help people? It’s irresponsible! But, again, I guess the ending had to be somewhat realistic, at least in the context of overcoming anorexia. SIGH. I really do wish we’d had a little more paranormal adventure, and a little less social issue drama.

But all in all, it was a solid story. Yes, a bit of a PSA, but an entertaining, non-preachy one. The paranormal aspects were quite fascinating, and in that respect, it left me wanting more. I’m curious about War and her power set, and her inevitable relationship with Death, so I’m eagerly moving on to the next book in the series, Rage.

The bottom line: a good read for teens with eating disorders. Hunger is a realistic and honest take on the issue without any judgment or condescension, with enough of a paranormal twist to make it readable for non-anorexics as well.