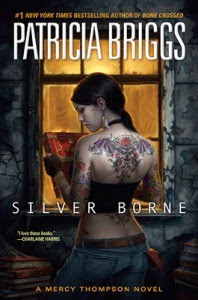 Being a mechanic is hard work. Mercy Thompson, for instance, just spent the last couple of months trying to evade the murderous queen of the local vampire seethe. And now the leader of the werewolf pack, who’s maybe-more-than-just-a-friend, has asked for her help. A book of fae secrets has come to light and they’re all about to find out how implacable – and dangerous – the fae can be.

OK, so maybe her troubles have nothing to do with the job. But she sure could use a holiday…

In Silver Borne, Mercy receives a phone call from Tad, Zee’s son, inquiring about the fae book she borrowed in Iron Kissed. But she runs into trouble trying to return it to Phin, the part-fae book store owner, who has gone missing. Meanwhile,the pack is having issues accepting Mercy as their alpha’s mate, and Sam’s depression has culminated in a suicide attempt that leaves his wolf in charge.

Once again Briggs has gone the route of the dual plot lines, only this time there are dual subplots as well. Not only do we have to keep track of the mystery involving the fae book, but there is also intrigue within the pack, the issue of Sam’s attempted suicide, and the question of who hired the human bounty hunter set after Adam. Its disconcerting, as it was with Bone Crossed, to have one story advertised on the cover, but another (in this case, Mercy’s trouble with the pack) take up a good chunk of the book. They ended up working all right together; Sam’s issues sort of faded into the background until the end, where they were resolved with the fae plot, and the pack drama provided a running theme of acceptance that also ended up factoring into the conclusion. The only real problem we had with the story’s structure was with the mid-book resolution of the pack conspiracy against Adam and Mercy. It just felt odd to stop everything and have a confrontation that really didn’t have anything to do with the over all plot of the book.

Really, though, our biggest issue with this book is the literal demolition of the last vestige of Mercy’s independence. Because of her issues with the pack, and her own desire to retain some of herself and something that belonged to her, Mercy hasn’t moved in with Adam. She is still (happily) living in her trailer with Sam. But because Briggs has some pathological need to destroy every shred of Mercy’s independence, what does she do? Well she blows it to smithereens. No, LITERALLY, she blows up her fucking trailer!

This is the last step of what we’ve been talking about trough this entire series review: the breaking down of Mercy Thompson. In Blood Bound, a supposedly independent Mercy realizes through her encounters with Adam that she doesn’t mind submitting to him; in fact, she wants to and has just been waiting for the right man to inspire this desire. In Iron Kissed, she is pressured to chose between Adam and Sam like RIGHT NOW, and arbitrarily knocks Sam out of the running (for reasons that apply to Adam as well), and through her rape realizes that she doesn’t want to be alone. In Bone Crossed, she accepts Adam as her mate, and he, out of jealousy, forces her into becoming pack. And because she has seen the error of her ways, she thanks him. And finally in Silver Borne, bye bye trailer. Now you have to go live with Adam like a good wife!

I bet in River Crossed her garage gets swept up by a tornado and she has to stay home and cook for Adam.

Our second biggest issue has to do with the fight between Paul and Adam. Because Adam is badly injured before the fight, neither Mercy nor Mary Jo wants him to take on Paul. In her attempts to derail the fight, Mary Jo asks to challenge Paul. This isn’t allowed in werewolf society, because unmated women are not recognized in the pack hierarchy and have no authority to challenge a male. Mary Jo demands that her dominance be recognized, and the pack has to discuss this. In the course of this discussion, Mercy suggests that if they are going to recognize Mary Jo’s dominance, then they must also recognize Honey’s.

There are several things wrong about this. First, it has been established that, for whatever reason, Honey has no desire to rank higher in the pack, but Mercy ignores this wish and totally throws Honey under the bus for Adam. Way to show female solidarity there, Mercy. Second, after Mercy’s assertion is shot down by the pack, she just lets it go without argument. What the hell Mercy? What happened to “if I were in charge of the werewolves, I would drag them kicking and screaming into the twenty first century”?

Finally, while deciding whether or not to allow Mary Jo to fight, the pack talks about why a woman’s dominance doesn’t count. Darryl suggests that, in most cases, the women need to be protected because they bear the children that carry on the species, and also points out that female werewolves are extremely rare. But Aurielle replies that werewolf women aren’t necessary to the survival of the species because they don’t bear children, and werewolves don’t reproduce that way anyway, so this doesn’t apply. And yet despite this rebuttal, the pack’s verdict is still no.

So, when it comes right down to it, the reason that werewolf women can’t hold their own rank is simply because they are women.

Oh, and by the way, once shot down, Mercy and Aurielle just accept this. I don’t think we have to say why this bugs us, so moving on…

Honestly, there isn’t much more we have to say about this book. We have other little troubling issues – like the fact that Sam’s true love is a girl he traumatized by mauling nearly to death, but this is totally okay because he felt bad about it, and she forgave him, or that Adam once again acts like an abusive dick, smashing up Mercy’s office in his rage after she is held at gunpoint by the bounty hunter, and fails to tell him about Sam’s condition, or that we smell a little bit of race!fail regarding Gabriel’s mom, who totally breaks those Mexican stereotypes by being poor, having a crapload of children with no father in sight, and paying her debt by cleaning Mercy’s garage. But honestly, we’re sick of talking about this series, so we’re going to leave it at that.

On the upside, the plot wasn’t terrible, and we liked Sam as a wolf waaaaay more than we liked him as a human. He was cute. We enjoyed Bran’s walk with Mercy and explanation of the pack bonds, which was nicely described and had very beautiful visual imagery. And hey, this time Mercy actually (sort of) saved herself; it was nice to see her handling a gun again, even if the end fight with the fae queen was a bit anti-climactic. But we got to see more of the fae world, and that was pretty interesting. So Silver Borne isn’t the worst book in the series, but it’s not the most memorable, either.

Overall, we’re very, very disappointed with this series. As we said in the Iron Kissed review, it has so much potential, and so many good things going for it, but time and time again, we’re smacked in the face with the treatment of women in Brigg’s world, and Mercy’s growing acceptance of – and integration into – a fundamentally flawed culture, not to mention the breaking down of Mercy herself. We would so love to call ourselves fans of this series, but by doing so, we feel like it would be condoning Brigg’s views, and that’s not something we can do. Take from that what you will.