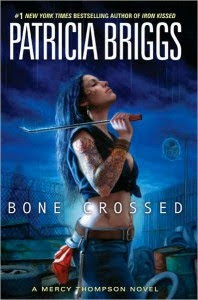 By day, Mercy Thompson is a car mechanic in Eastern Washington. By night, she explores her preternatural side. As a shape-shifter with some unusual talents, Mercy’s found herself maintaining a tenuous harmony between the human and the not-so- human on more than one occasion. This time she may get more than she bargained for.

In Bone Crossed, Marsilia, the Mistress of the vampire seethe, finally learns the truth about Mercy and Stefan’s actions in Blood Bound and turns her wrath on the two of them, starting by sending a starving Stefan to Mercy’s home. Meanwhile, Mercy’s friend from college comes to her and seeks her help in dealing with a ghost terrorizing her home and her son.

This is the first book where we get the dual-plotline format, presumably because Briggs liked both concepts but couldn’t figure out a way to stretch them both out into book length. It’s strange to have one plot advertised on the cover, and then have a completely different one make up most of the book, especially when there is nothing tying the two together, except Mercy. It must suck to have two super powerful bad guys plotting against you at the exact same time.

There’s nothing particularly memorable about Bone Crossed. Mercy is done wavering between men and has basically settled into a relationship with Adam. She is done fighting for her independence, and just accepts all the decisions that Adam makes for her where she would have at least argued one or two books ago. Because we’ve seen what happens when Mercy makes decisions for her self. It just really seems that in this book Mercy is broken. This is understandable after having been raped, but we feel that she allows to much of her self to be lost and stops fighting for the normal, uncomplicated life that she wanted to build. Instead she throws herself head first into the werewolf society she’d previously decided against by becoming a member of a pack and the Alpha’s mate.

The manner in which Adam makes Marcy pack is probably our biggest issue with this book, and the best example of Mercy’s transformation. Having taken Stefan’s blood in Blood Bound, Mercy still has a psychic connection to him, and feels his despair upon learning that his flock has been wiped out. This triggers a panic attack in Mercy, while she is with Adam. Adam realizes why she is panicking, and without giving Mercy a choice, performs the ceremony that makes her pack, which breaks the connection to Stefan. He then states, “He can’t have you. Not now. Not ever. I don’t owe him that.”

After calming down, Adam rightly feels that he did wrong, and should be berated for his presumption. But the new, improved Mercy is not angry. Instead, she says this:

WHY THANK YOU ADAM FOR MAKING ALL MY FUCKING DECISIONS FOR ME.

This is how much Mercy has changed. Adam flat-out admits that he made her pack because he didn’t want her to have a connection with someone else (possessive much?). Even Adam realizes that this was overstepping his bounds. But Mercy thanks him. WHAT THE HELL! SHE THANKS HIM. This is another step in the breaking down of Mercy Thompson. Where previously she would have been livid and argued, she has now accepted that her man Adam knows what’s best for her.

It’s worth noting that Mercy’s only real act of independence in this book is to decide who to subjugate herself to, Stefan or the big bad, Blackwood. Girl power.

Really not much else happens to incite our rage in this book, in that respect. Mercy’s pretty much given up fighting for herself, so we stopped caring. But moving on.

The plots for this book are equally reliant upon coincidence and over-complexity. Marsilia’s subplot (the one advertised on the cover, mind you) takes up less than 30% of the book, and is convoluted as hell. We use that word to describe Briggs’ plots for this series a lot, but it once again applies. The whole idea that Marsilia is exacting her revenge on Mercy for the events of Blood Bound (which, again, is ON THE COVER) is just a red herring to distract from a more intricate plan involving making Stefan suffer for the sake of vampire politics. It doesn’t really go anywhere and mostly serves to remove the sword of Damocles that’s been hanging over Mercy’s head since she offed Andre in Blood Bound. What bugs us is that this just happens to coincide with a completely separate evil plot to hurt Mercy that another vampire in a different part of the state is putting into action. A great deal of padding in the form of speculative discussions goes into exploring the idea that the two plots are related, but ultimately go nowhere and are pointless because they AREN’T.

Blackwood’s plot is far more interesting than Marsilia’s, though, and comes with a new set of complex and well-written side characters, even if it does rely a bit to much on coincidence to bring it about. Mercy’s goal in this one is to save the son of her college…acquaintance from the ghost inhabiting her house. We LOVED the little boy, Chad. He was tough and really smart and it was adorable reading his interaction with Mercy and Stefan. His father has some nice development by the end of the book, as well, and the friend, Amber was a great deal more tolerable than you’d initially expect.

We liked the idea behind Blackwood’s master plan, too – you are what you eat – but we found it a little hard to believe that he was the only vampire to have figured this out. Especially since Marsilia’s seethe had been executing walkers for hundreds of years. So…what? No one ever drank from one? Not to mention the fae. You can’t tell us that no vampire has ever fed off a fae. No one ever noticed that you get special powers by drinking from certain fae? It’s just to hard to believe that only one vampire knows about this when it seems like it should be common knowledge. Is this just Blackwood’s ability? Can *only* he steal powers from other supernatural creatures? It might be implied, but it’s never fully stated, and we’re left with nagging questions and potential plot holes.

Anyway, in the end, Mercy is captured (again) and is left with few options due to having blown out her pack connection to Adam prior to being abducted (yay for plot convenience). To her credit, Mercy does play somewhat of a role in her own escape and the destruction of the bad guy, although – surprise – a male fae does most of the heavy lifting. But points for trying, we suppose.

All in all, Bone Crossed rates a good ‘meh’ with us. There are some good points, like the side characters and ideas, but Mercy has lost so much of her spark for us that we find it hard to care anymore about some of the things she faces.

But depending on what you get out of the Mercy series, your mileage may vary.