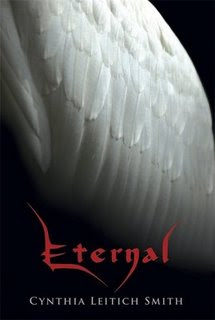 Elevated and adopted by none other than the reigning King of the Mantle of Dracul, Miranda goes from high school theater wannabe to glamorous royal fiend over night. Meanwhile, her reckless and adoring guardian angel, Zachary-fighting in human guise as the princess’s personal assistant-has his work cut out for him with the Masters Death Day gala fast approaching. Can Zachary save his girls soul and redeem himself before all hell arrives, quite literally, on their door step?

Characters: Miranda is actually an interesting character, in that she’s flawed, distant, somewhat prissy, and very complex. In the first few chapters, you see Miranda as a normal teenage girl – you hear about her issues with her parents, school, friends, and she expressed her emotions openly, in a way that you can actually relate to. But after she is taken by the vampire King, the writing style changes, and the Miranda you read about from then on is very distant and suppresses her feelings from herself, and thus the reader. You don’t get any internal angsty monologues about how much her life sucks, she just acts in ways that convey her feelings. We like this. We *really* like this. After twenty-some-odd books of teenage girls or centuries-old-vampires whining about how sad they are and how alone they are or how evil they are, while they may or may not actually do something about it, it’s nice to have someone who doesn’t waste her breath bitching, and instead takes action to demonstrate and correct the things she doesn’t like about her life. It tells you more about the character and her strength without actually literally telling you anything, and that says volumes about the author’s ability to write.

For example, at one point, Miranda, who has been a vampire for over a year, is given a girl to drink from who resembles her human best friend Lucy. Previously, she had expressed no remorse for taking blood/killing, but when she is faced with this reminder of her human life, she sends the girl away and, without ceremony or further discussion, stops drinking from live humans.

That being said, after being turned, Miranda is kind of a priss. Granted, she’s told to be this way to fit her new ‘vampire princess’ persona, but it makes it harder to find redeeming qualities. Initially (post-turning) she’s actually very unlikable (well, one of us found her ruthlessness unlikable – the other had more of an issue with the prissiness), having become brutal and seemingly conscienceless, more like the soulless monster vampires were before Anne Rice made them emo and Stephanie Meyer made them emo and sparkly (more on this in the world section). But this again is the author’s intention. We don’t think you’re supposed to like Miranda after she’s changed, at least not until her guardian angel Zachary comes into the picture.

Zachary, as previously mentioned, begins the book as Miranda’s guardian angel. Although he is assigned to her throughout, after his intervention leads to her being kidnapped and changed, he is stripped of most of his powers and put in what they refer to as ‘guardian angel time-out’. As a character…we have to admit, we actually really liked Zachary. What initially excited us about the book, through the first few chapters, was that both Zachary and Miranda had personalities that could be described without using forty synonyms for ‘angsty’ or ‘depressed’. Zachary especially is very upbeat and cheerful and goofy, a far cry from most of the depressing, broody YA paranormal romance heroes. He was, as a guardian angel, kind of a pervert. He talked a few times about enjoying Miranda’s shower time, and taking physical form to watch her sleep, but we were able to let this slide because he wasn’t overly…weird or intense about it. He didn’t exactly go out of his way to stalk or peep on her – it was his job to watch over her as a guardian angel, and he reacted to the job and its perks the way you’d think most teenage boys would.

Actually, the overall lack of intensity in the relationship between Zachary and Miranda was another pleasant break from the YAPR norm. Not to say there wasn’t any chemistry between the two, but the romance was more understated. There was none of the creepy, co-dependent, needy bullshit that you get in most novels; it was more just pleasant, and sweet. And way less creepy. Zachary, both before and after losing her, mooned over Miranda a bit, but he wasn’t overly obsessive about it, and again, there was no excessive whining. His actions and offhand comments (for example, noting that a girl on the street reminded him of ‘his girl’) demonstrated his state of mind without beating us over the head with it. Likewise, after finally meeting him midway through the book, Miranda doesn’t jabber on about how he’s ‘OMG SO HOT AND DREAMY’ or fall in love at first sight, but instead comes to care about his opinion of her and regains some of her humanity. Because of the book’s pacing, the relationship between the two isn’t developed as gradually as it really should be – one of us believes Miranda’s declaration of love for Zachary near the end is a bit too much out of nowhere – but it’s not a deal-breaker.

The supporting characters are Archibald Mosby Redford also know as ‘Father’, ‘Master’ and formally ‘King of the Mantel of Dracul’; Nora, the manor’s chef; and Harrison, the Master’s personal assistant. Father, as Miranda calls him, is actually a fairly unique villain for this kind of book, in that he’s less interested in, say, taking over the world (been there, done that), and is more of an abusive-father-type antagonist. He is a monster with dimension; casually brutal with a charming face, punctuated by moments of incomprehensible kindness towards Miranda and others in his staff. We found him to be one of the scarier villains we’ve read of of late, because of his polite, casual way of intimidating and threatening. He was unpredictable – though he shows great affection for Miranda, his love could easily turn to deep hated if she displeased him.

Nora and Harrison, two members of the household staff, were notable for their moral ambiguity. You come to actually sort of like them (or Nora, at least; Harrison adds a bit of bitter comic relief), all the while knowing that you shouldn’t because they are facilitating the murders of innocent people. And yet, they do this for understandable reasons: Nora is being blackmailed into servitude with the life of her son, and Harrison was born into the life and wants to eventually become a vampire himself. His twin brother, a vampire party planner, stays tied to the world out of love and concern for his brother. It’s nice to see that sort of moral complexity put into even the side characters.

World: The world of Eternal shares some similarities with other books of this genre – it has vampires, shifters, and guardian angels (oh my), and, as is a growing trend among paranormal books these days, the existence of vampires and shifters are common knowledge, although according to the novel, vampires haven’t been spotted since the ’60s. However, the book actually takes a welcome turn in bringing vampires back to their monster roots.

The vampires in this book are almost all evil, or at least, exist in a society where keeping humans as prisons for food, and the torture of both vampire and human servants, is perfectly acceptable. They are not brooding, tortured-but-ultimately-good creatures that just happen to drink blood; they’re predators who revel in their own pleasure, and believe it is their right to take what they please from those around them. At least, that is what the vampire aristocracy in this book is like – the king and his noble court. Actually, they are not unlike the nobility of the middle ages, or perhaps even the rich, powerful, and famous socialites of today: hedonistic and conscienceless, reveling in decadence at the expense of others. So perhaps they are not exactly monsters, but are, instead, the worst in ourselves, which actually makes Miranda’s journey into their society interesting on different levels. But more on that in the plot section.

The only really troubling issue we came upon in this book was the treatment of the guardian angels and the world’s overall theology. For a book about guardian angels, the book doesn’t dwell on religion as much as you’d expect, but they do make a particular, almost casual comment that essentially gives the middle finger to those who don’t hold a Judeo-Christian world view. On page 91, Zachary says:

With Danny, it wasn’t his being agnostic that was the problem. Forget what you might have heard. There are no separate corps of angels for agnostics, atheists, Catholics, Protestants, Jews, Muslims, Mormons, Buddhists, Unitarians, Hindus, Druids, Shintoists, Wiccans, and so on. To put a spin on the old saying, it’s okay if you don’t believe in angels.

We believe in you.

This paragraph wouldn’t be quite so troublesome (though just as condescending) if Zachary had not made numerous references to various figures in Christian mythology, such as the Archangels Gabriel and Michael. It’s made pretty clear that the angels in this book are based on Christianity. So by saying so explicitly that it doesn’t matter what you believe, there are no separate sets of angels for various religions, what they’re really saying is that there is nothing else but the Christian view of spirituality and the afterlife; it is reality. I guess you could call it progressive that they don’t automatically damn everyone to Hell for not being Christian, but they are still nullifying every other religious perspective, and this is hugely offensive.

The whole book has an overall feel of preachiness that really got in the way of enjoying what was otherwise a pretty good and, holy shit, original story.

Plot: There’s not really much to critique or really even say about the plot of Eternal – it’s more of a character-driven book than anything else, and this was actually okay with us. It didn’t meander, as you might expect, nor was it overly convoluted. It flowed, organically and believably, due to the actions of the characters – the whole end conflict is brought about by Zachary’s actions and influence on Miranda (well technically the whole book is brought about by Zachary’s interference…) and we like that you can see the character’s influence and participation in the events that unfold. Things would have been different had these particular characters not been involved, and that makes the story both worth telling, and worth telling from these particular characters’ points of view.

The overall point of the book, we felt, was to follow Miranda’s journey and transformation as a character. She began as a fairly normal, down-to-earth teenage girl, but was taken from that life and thrust into the role of a vapid socialite, and was forced to play that role at the expense of her own personality and beliefs. They say that most vampire/supernatural books are metaphors for something – growing up, becoming your true self, fulfilling your potential, or conversely persecution, subjugation, and devolution; losing yourself to the darker instincts. In the case of Eternal, the vampire society and all that it represents, and Miranda’s reaction and ultimate triumph over it made the book more about being true to yourself and your beliefs when everything around you has changed, and is urging you to become something else. It’s one of those rare times that we can actually see the metaphor, and the moral of the story, and we liked it, even if it ultimately resulted in Miranda’s character becoming the Vampire Jesus. SHE DIED FOR YOUR SINS.

All in all, we liked this book. Big religious middle finger aside, we recommend it for its originality, complex characters, and lack of whining.