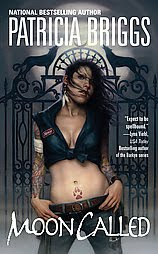 Mercy Thompson’s sexy next-door neighbor is a werewolf. She’s tinkering with a VW Bus at her mechanic’s shop that happens to belong to a vampire.

But then, Mercy Thompson is not exactly normal herself…and her connection to the world of things that go bump in the night is about to get her into a whole lot of trouble.

Characters: In Mercy Thompson, Briggs has a lot of potential for a really interesting, relatable badass heroine. In a world on invincible god-like sarcastic heroines, Mercy at first seems like a breath of fresh air. She is strong, but not invincible. As a coyote skinwalker in a world of werewolves and vampires and fae, her powers are cool, but are not enough to put her anywhere near the top of the food chain. And yet despite this, Mercy is capable and manages her life well, holding her own with her skills, wits, and sheer will, and keeping her independence from the overpowering control of the hidden werewolf society with her defiant attitude and behavior.

But Briggs’ overtures at making Mercy a strong, independent character are superficial and token. She almost immediately confuses – and in our case, frustrates – the reader by giving Mercy a defiant attitude, but submissive behavior in the face of any and every aggressive character more powerful than her. And because of the way Briggs’ world is structured, just about every supernatural character – and certainly all of her love interests – fit that description. This is one of the most prominent and frustrating flaws in Briggs’ series, and is an example of a larger issue that we’ll discuss later on, in the World section.

Mercy’s two obligatory love interests are sexy Adam Hauptman, the local pack Alpha, and Dr. Samuel Cornick, the ancient werewolf ‘prince’ (for lack of a better or shorter explanation) and Mercy’s first love. In them, our opinions differ.

Cyna: For me, neither Samuel nor Adam presented any kind of likable love interest. Adam was knocked out half the book, and spent his waking scenes being a big, studly werewolf MAN, telling Mercy where to go and what to do, because of course, he has a penis and thus knows best. Samuel was hardly better, spending more time conscious than Adam, but treating Mercy with much the same patronizing condescending. Bossing around is apparently what Alpha werewolves do best, as even their supposed good qualities – i.e., protectiveness, loyalty – all seem to stem from a need to control. And both seemed to be moved more by their desire to dominate and possess Mercy, than by any love or attraction they might have for her. This does, in no way, an OTP make.

Kayla: For me, both of them have likable qualities, but neither won me over completely. Though I didn’t like Adam until the end of the book. Adam in the beginning, was very dominant and controlling with Mercy, and then, as previously mentioned, was unconscious for most of the book, until the end when he showed his drive to protect his daughter, which made him likable. Sam, to me, was likable and understandable from the beginning. Though you don’t find out until the middle of the book why he wanted Mercy for himself, to me, his desire to have living children with her was very sympathetic. Mercy describes him as more compassionate and easier going in comparison to other werewolves, and I saw that in his character, making him my preferred love interest.

There are an abundance of side characters – gay werewolf Warren, his human boyfriend Kyle (two of our favorite characters, probably because they don’t spend half the book bossing Mercy around); Stefan, Mercy’s vampire contact (another of our favs. TEAM STEFAN); Zee, Mercy’s gruff and loveable fae mentor; Bran, the big werewolf bossman; and Jesse, Adam’s human daughter. The side characters are where Briggs shines. Each has a distinctive personality, and are fairly well-developed when they appear, perhaps even more so than the primary love interests.

World: The world that Briggs creates, with her vampires, werewolves, and fae, runs the gamut from intriguing to downright offensive. Fae and vampires don’t play too big a part in this particular novel, although we are rather pointlessly given a brief look at the vampire coven seethe that will play a larger part in books to come, probably just so that we have a tie-in motivator for the next novel. But the stars of Moon Called are really the werewolves.

Briggs wolves differ from your average werewolf in that they are near-immortal, physically, and stop aging when they become wolves. The manner in which they become werewolves is also a bit different – rather than needing to be bitten or scratched, a person must be mauled to within an inch of their life and recover, to become a werewolf. They are also unable to reproduce among themselves, as female werewolves miscarry when they must change during the full moon. Reproducing among humans is possible, but very difficult, and results in completely human children. Finally, a big, grand deal is made of pack dynamics, and a wolf’s “dominance”. Their position in the pack affects their behavior, even in human form, in an almost compulsive manner. And women – HA. Even by Mercy’s admittance, werewolves are centuries behind the times in the role that women play in their society.

The defining characteristics that Briggs applies to her wolves gives them an inherently violent, and absolutely chauvinistic society. For the most part, the werewolves, and especially their Big Bossman, Bran, are old. As in ooooooooooold, old, and as such, apparently have yet to recognize that women are people, and can, you know, vote and stuff. But apparently not in werewolf elections. It isn’t touched on in this book as much as it is in the sequels, but you get the enough of a sexist vibe to make it annoying. Also, breeding is a BIG DEAL, and from the way the few werewolf women we meet in Moon Called act, Briggs seems to think that when your ladyparts don’t work, you become a bitter old hag who hates any women who can have children. Even if they haven’t really done anything but, y’know, have working ovaries. This makes Mercy, the AMAZING CHILDBEARING COYOTE, even more of an outcast than her not being a werewolf does.

But the sexist behavior runs both ways, because, as previously mentioned, nearly every male werewolf Mercy encounters has a dominance trip that extends beyond their wolf hierarchy and affects their human behavior. Even in human form, the men are controlling, violent, quick-tempered, and generally assholes, and try as Briggs might to cover these abusive traits with ‘protectiveness’ and ‘feeling threatened’ and excuse it as being wolfish behavior that is difficult for the human side to control, it’s extremely hard to get over male leads who could potentially harm the heroine if they were to lose control. And naturally, the author would portray it as being Mercy’s fault for angering or refusing to submit to them. It’s just a fucked up start to a fucked up world that continues to get more and more offensively sexist as the books go on. Hard to believe a woman wrote this.

Plot: The ‘plot’, if you can call it that, is a convoluted and confusing mess, which seems to be primarily designed to show off Briggs shiny new world, and create a ‘plausible’ tie-in for her next book. Mercy, and by extension, the reader, is jerked from place to place because the plot says so, usually to determine later on that they didn’t really need to in the first place. For example, we make a pit stop at the local vampire seethe and meet its Mistress, Marsilia, ostensibly to get information about any newcomers in the seethe’s territory, only for Mercy to later mention that this was unnecessary, because Bran would have discovered the same information through his own connections. The scene therefore serves absolutely no purpose but to wave this worlds’ vampires in front of us and reveal that our heroine is immune to magic, things that aren’t terribly important to this book and could have been established without a chapter-long detour.

And why is it that our heroine spends almost the entire book doing nothing more important than playing Taxi Driver? She has a few moments of action in the opening chapters, killing a few werewolves and getting the plot ball rolling, but she almost immediately hands the investigation over to Adam, then later Bran, and sort of tags along, sitting on the sidelines. She plays a more active part in the end as well, but her roles in the actual investigation and progressive discovery of the overall Master Plan seems forced – she doesn’t need to be there, and in some cases is specifically told not to be. She just tags along because she’s the protagonist, okay? SHE’S GOING. But don’t worry, she has a sequel to completely sit out!

Anyway, in the end, it all comes down to a pointlessly complex and needlessly violent Master Plan that has little or no relevance even to itself, and seems to be the product of an author writing without any idea of where she’s going to end up. Sure, she keeps you from guessing the ultimate goal until the very end, but there’s a difference between clever planning and arbitrary plot twists.

And yet despite all this, despite all the massive, infuriating bullshit in each and every aspect of this novel, both of us read it. Eagerly. And the sequel. And the sequel to that. There’s something about Briggs’ writing that draws you in, and even if you’re offended by it, it’s freakishly compelling.