Hey guys, long time no see! Sorry about the long hiatus, we’re currently in the process of working through our third House of Night review, and, well, that’s a drag-your-brain-through-at-gunpoint deal in the best of situations. Slow going. So to make up for it, we’re going to talk about something good for a change. We’re going to talk about…comics.

Yes, monthly comics are a little out of our purview, but we’re making an exception for these. Runaways is a series that’s close enough in premise and scope to be a good crossover read for fans of paranormal and sci-fi YA, and Saga is just fucking awesome. And they both happen to spring from the mind of the same author… 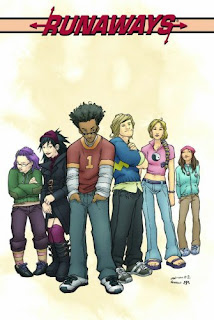 At some point in their lives, all young people believe their parents are evil…but what if they really are? Meet Alex, Karolina, Gert, Chase, Molly, and Nico – whose lives are about to take an unexpected turn. When these six young friends discover their parents are all secretly super-powered villains, the shocked teens find strength in one another. Together, they run away from home and straight into the adventure of their lives – vowing to turn the tables on their evil legacy.

*note: this is a review of the first three collected volumes of Runaways, or the first omnibus. Summary comes from volume one, Pride and Joy.

Runaways has a really strong opening. The first six issues are fantastic, and do a great job of setting up the cast, the premise, and the stakes, with wit and heart. It’s been a long time since I’ve enjoyed a cast of characters so much, in comics OR prose, and the titular Runaways were likable, sharp protagonists. I’m not big on kids in general, and obviously kid lit isn’t really my thing, but despite ranging in age from eleven to sixteen, the protagonists of Runaways manage to avoid falling into typical “child character” traps of being whiny or annoying or excessively naive or stupid. And while the premise plays out like a childhood fantasy – who didn’t daydream as a kid about running away to live in a sweet-ass clubhouse without rules or restrictions? – the details of the situation and the kids themselves keep the story from tumbling into cheesy Disney Channel/Spy Kids-esque territory. The characters – their flaws, indecision, and bonds – keep the story grounded.

The diversity of the team here is so fucking refreshing, too. As you can (mostly) see from the group shot on the cover, the Runaways are quite a varied group. Our team includes four girls – one Japanese, one overweight, one a lesbian – and is lead by an African-American boy genius. No stereotypes in sight (er, Gothic Lolita Asian girl aside, but Vaughan has fun with her and a few Magical Girl tropes), and their powers are just as varied as the characters. It’s a fun mash-up, really. You’ve got aliens, time-travelers, sorcerers, mad scientists, mutants, and plain old evil geniuses. My personal favorite power had to be Gert’s: her parents traveled to the future to buy her a genetically-engineered telepathic raptor that she names “Old Lace”. 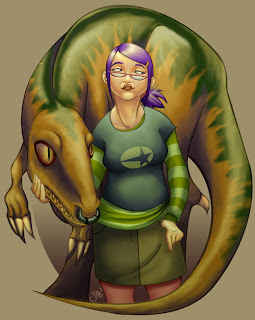 That image is the reason I picked up this series

There is nothing about that that is not awesome.

Unfortunately, while the first volume of the series ends strong (at issue six), the story kind of unravels from there. Volume two – issues seven through twelve – feel a lot like filler, and the logic behind the plot becomes very…loose. Things happen because the plot says so, and the relationship between the two lead characters, Nico and Alex, lacks in real development, and progresses far too quickly. One second they have a crush on one another, the next they’re declaring their love. I mean, I know they’re teenagers and infatuation and all that, but we barely even saw them spend any time together!

And I hate to say it, but following issue six, the story felt a little more…childish? It seemed like it didn’t have to go into too much detail about the “hows” and “whys”, perhaps because kids don’t really think so hard about that sort of thing. Cartoon-logic, I’d say; there are some weird plot holes involving foresight and prophecy. However, this may also have something to do with the rather odd progression of time in the book – weeks pass between issues, so when reading in a collected format, the events end up feeling more condensed than they actually are, in-world.

The book also frequently falls prey to exposition speak. It’s a common problem in comics, where writers will feel the need to have characters recap the last issue’s events in stilted dialogue, to refresh monthly readers or bring new ones up to speed. We get the “what we’re doing now and why” speech pretty frequently throughout the series, and I swear to God, a couple times we got it more than once per issue.

I was also pretty disappointed that this particular story arc never really expanded on the initial idea of the kids fighting crime to make up for their parent’s mistakes. Given the outcome of the story, even though the team goes on to do so in future installments, you still kinda lose that redemption and oppositional dynamic with the parents.

Still, the arc has a pretty satisfying, if somewhat predictable, ending, and I liked that the book didn’t go out of its way to demonize the kids’ parents. Yes, they were evil super-villains bent on destroying the world, but they were also parents who loved their children, and that was more important. It’s actually kind of rare to see cackling, mustache-twirling, bona-fide supervillains humanized in such a way, and I liked that. It’s a bittersweet sort of ending, but it’s also a relatively empowering one for the characters.

I’d definitely recommend Runaways to anyone interested in perhaps dipping a toe into shared-universe comics. There’s absolutely no Marvel history or continuity you need to be aware of the enjoy the series – though they do become more heavily involved with the Marvel universe in later volumes – and it’s probably relevant to mention that Joss Wheadon takes over writing the series around that point. I haven’t read his run yet, but I am looking forward to reading more Runaways in the future.

Although I do like how obnoxiously pretentious and snarky Gert is, my personal favorite character is Molly. I loved the contrast of her childish personality and her powerhouse mutant ability to punch things really, really hard. Also, sadface about Alex, I was a little frustrated he ended up being the mole, BUT I totes ship Karolina/Nico, yo. 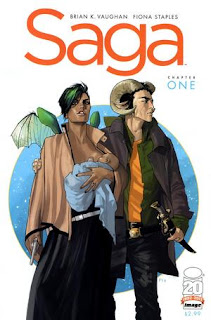 When two soldiers from opposite sides of a never-ending galactic war fall in love, they risk everything to bring a fragile new life into a dangerous old universe.

From New York Times bestselling writer Brian K. Vaughan (Y: The Last Man, Ex Machina) and critically acclaimed artist Fiona Staples (Mystery Society, North 40), Saga is the sweeping tale of one young family fighting to find their place in the worlds. Fantasy and science fiction are wed like never before in this sexy, subversive drama for adults.

This specially priced volume collects the first six issues of the smash-hit series The Onion A.V. Club calls “the emotional epic Hollywood wishes it could make.”

Saga is fucking amazing. If I could ever convince you guys to go out and buy a comic, it would be this. I literally finished reading it like an hour ago, and got up to write this blog because I loved it and I want to tell everyone that I loved it and that they should read it.

The premise is exactly what it says on the tin: Alana and Marko are two people from opposite sides of warring races who fell in love. They have a child (in the first issue), and spend the next five trying to stay together and stay alive, in the face of bounty hunters, monsters, and two governments that want to see them dead. I’ve heard it called Romeo and Juliet meets Star Wars, but I feel like that’s doing it a bit of a disservice.

For one, the leads, Alana and Marko, are no lovelorn teenagers, okay? They’re adults, thank god, and they have a really great, comfortable relationship dynamic that I’d love to see more of. Though Alana is definitely the more aggressive of the two, and Marko more easy-going, they bicker and banter and kiss and play and generally engage in a relationship of equals. They parent together, they fight together, and they make decisions together. It’s not Alana following Marko, or visa versa, and there’s no trace of an inherent power imbalance. I love it! It’s so nice to find this kind of relationship in any medium.

Alana is shaping up to become on of my favorite female characters – she’s fierce and brazen and capable and resolved and hot-headed and funny and smart’ and the narrative doesn’t condemn her for any of that. I love the expressions that artist Fiona Staples gives her: the “you’ve gotta be kidding me”s and the angry glares and the tender smiles she and Marko share. There’s just so much personality in the characters that comes across in both the writing and the art.

I really liked Marko as well – I found it endearing that he cried without shame at the birth of his daughter, and that his vow of nonviolence was kind of pompous but sincere, yet he broke it without hesitation to defend his family. He, too, was a very likable character.

Really, most of the characters were – and that’s another thing I enjoyed about the book. Even the antagonists – the monarchs and government leaders who want Alana and Marko dead, the “Freelancer” bounty hunters they sent after them, the “monsters” in the evil woods – they’re all, well, likable. They all have understandable motivations, despite what they’re doing. They’re not mustache-twirling evil McAssholes – they’re just people in opposing situations.

Saga also features world-building at its finest. We’re dropped in without any fucking idea what’s going on or why or what this universe is like, but we’re given enough information in context to suss it out for ourselves without being spoon-fed every little thing. The exposition doesn’t feel like exposition, the quirks of the universe – rocket ships that grow on trees! robot people with TVs for heads! – don’t feel like deus ex machina or hand-waving, it all just feels like an organic part of this very bizarre but wonderful universe Vaughan and Staples have created. In fact, “wonderful” is just the right word – there’s this sense of wonder and scope and awe, especially in the art, that you just don’t find very often.

If I had any criticisms or warnings, one would be that there is some unexpectedly dark stuff, especially around issue three or four, that’s pretty disturbing and hard to read and reconcile, which I expect is the point. I also wasn’t terribly thrilled with the early fridging of a potentially interesting character – to drive her male love interest, of course – but I’m personally kind of hoping that she comes back at some point. It is a comic, after all.

But all in all, this is one of the best anythings I’ve read in a looooooooooooooong time, and you guys should all read it, too. It’s only ten bucks! You won’t regret it.