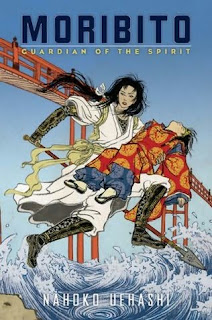 You’ve never read a fantasy novel like this one! The deep well of Japanese myth merges with the Western fantasy tradition for a novel that’s as rich in place and culture as it is hard to put down.Balsa was a wanderer and warrior for hire. Then she rescued a boy flung into a raging river – and at that moment, her destiny changed. Now Balsa must protect the boy – the Prince Chagum – on his quest to deliver the great egg of the water spirit to its source in the sea. As they travel across the land of Yogo and discover the truth about the spirit, they find themselves hunted by two deadly enemies: the egg-eating monster Rarunga…and the prince’s own father.

So I thought this was going to be a short one, because, well, the book is pretty short, and I didn’t think I had much to say about it. Then I started writing, and NGL, totally fangirling, but I don’t even care, because this series is fucking awesome, y’all. While Moribito isn’t perfect, it was a genuinely pleasurable reading experience, and I would gladly commit gratuitous acts of imaginary violence to have more like it.

For those who skipped the summary, Moribito is the story of Balsa, a thirty-year-old bodyguard, who is tasked with protecting a prince after it’s discovered that he carries a water spirit inside of him, which must hatch in order to prevent the country from suffering a terrible drought. The book follows their quest to ensure both the survival of the prince, Chagum, and the development of the spirit within him.

The thing you should probably be aware of, as a reader, is that Moribito is, for the most part, a children’s book. I’ve seen it on some urban fantasy lists on Goodreads, and expecting it to be something along the lines of, say, the Mercy Thompson or even Vampire Academy series isn’t quite accurate. It’s a fairytale, a fantasy adventure for children, with all of the sweet magic, creatures, and world-building that this implies. That doesn’t mean that it’s not still enjoyable for adults, but it’s definitely not the GrittyGrittyMurderANGSTSexLoveManFest that a lot of UF titles are. Think of it like a Pixar movie – it works for kids, but has enough meat and emotional relevance to appeal to adults as well.

The prose, storyline, and focus are simpler. The side characters can be a little flat. I’m not sure if it’s a result of the translation, or the prose itself, but the writing can be heavy on the “tell” side, and there are more than a few eyebrow-raising anachronisms that I suspect might be the result of localization. The story isn’t terribly complex or deep.

But – and it’s a big BUT – Moribito is more than worth the read for the joy of it; for the main characters, for their problems, for their bonds and their journey together, and oh sweet baby Cheesus, for Balsa.

I love Balsa. Over the course of two books and one anime series, she’s easily become one of my favorite characters, and you’ll all be receiving invitations to witness our glorious marital union within the month. There is just so much about her that is awesome: she’s thirty, she’s a bodyguard, she has lines on her face and bags under her eyes, she’s honest and brave and noble, she can take out a team of highly-trained assassins on her own, she’s rough around the edges, and holy fucking shit of surprises, her life does not revolve around romance! But she still loves and defends the people who’ve collected around her and become her family.

Balsa is basically the kind of female hero I want to read about more often. She’s so wonderfully competent, at her job, in the decisions she makes, as a leader, that it makes me want to cry, and not a little because truly competent female heroines are so rare.

While Balsa is the pinnacle of awesome in the story, it’s impossible not to like almost all of the characters we spend time with. Tanda, Chagum, Torogai, even Shuga are generally likable, and the relationships that are built between (most of) them are deep and enduring. I loved the way the relationships worked, here – they are an aspect of the story, not the whole, and they develop the characters, deepening the reader’s emotional investment in their success. The cast comes to care so much about one another that you don’t want to see them hurt or fail, if not for their own sake then for the other characters’.

Chagum is one of the best child characters I’ve read about in quite a while. He goes through some pretty serious development, from pampered prince to determined, responsible Guardian, and it’s to the book’s credit that he’s likable the whole way through. He starts out privileged and naive, yes, but never bratty or obnoxious or stereotypically child-like. He’s intelligent enough to understand the situation he’s in, to be restrained, to suck it up and follow Balsa’s instructions, and he doesn’t complain a whole lot. He’s such a trooper for so much of the book that when he does finally crack, and act out in a fit despair at his fate, it’s much more effective and heartbreaking. You sympathize with poor Chagum, you want him to be able to be a child, to have a normal life. You want things to be better for him.

And that’s kind of a thing for me, because I’m noooot big on kids. lol DO NOT WANT. But reading about Chagum, I was like this: 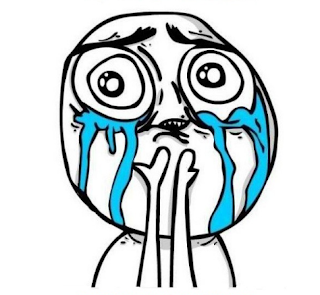 COME HERE I MUST HUG YOU NOW.

tl;dr I love Chagum and want to squish him.

The relationship between Balsa and Chagum is also sweet and wonderful and oh yeah, UTTERLY HEARTBREAKING. It’s very clever, the way Chagum’s journey in Moribito parallels Balsa’s own youth, and helps her come to realizations about herself and her own life. They end up helping one another grow so much.

That’s a pretty big spoiler if you can read Japanese.

I also enjoyed the relationship between Balsa and Tanda, her lifelong friend. I dislike calling him a “love interest”, because it implies more of a focus on romance than the book actually has, but they’re a lovely pairing. The two of them have a very adult relationship, not sex-wise, but in terms of complexity and maturity. Balsa and Tanda have a warm, teasing, comfortable friendship, but there’s an undercurrent of romantic love that they can’t quite make work, because of where they are in their lives: Tanda, a healer, is ready to settle and raise a family, but it is Balsa, in an unusual twist, who can’t bring herself to let go of her life as a wandering bodyguard. The love of fighting is too much a part of her, and she can’t leave it, despite caring for Tanda. Can I just say I kind of loved that? It’s such a typically male *flaw – in fact, the whole wandering warrior in general is usually a guy thing, and it’s kind of awesome to see not only that in a female character, but to see a male character be the one waiting for her “back home”.

*how much of a flaw it actually is is relative to the story, of course. YMMV.

At any rate, there’s some sadness about this situation, some frustration on Tanda’s part, but it’s not the life-ruining, all-consuming ~ANGST~ you usually see, and it doesn’t ruin their day-to-day interaction or their friendship.

That might be my favorite thing about Moribito – the story does not pull punches when it comes to complicated feelings, and the way life works out sometimes. There’s more of this when we get to Moribito II, but even in Spirit, you see that love doesn’t, and can’t, automatically override every other emotion or outside responsibility. We certainly get some of that in the ending, SOB, and in Chagum’s father – even if it is told rather than shown – who is sad, but ultimately willing, to have his son killed for the perceived benefit of his kingdom. Not that this gets him off the hook, but I like that it was at least acknowledged. There isn’t really technically a bad guy here, at least not in the traditional, malevolent sense. There are people, possibly doing bad things, and nature, being its kill-or-be-killed self.

Moribito‘s plot is pretty straightforward, mostly shifting between Balsa defending Chagum and learning more about his role as the Guardian of the Sacred Spirit, and a Star Gazer named Shuga, who gives us insight to the political thought process behind Chagum’s attempted assassination. He eventually uncovers a secret behind the Guardian and the kingdom’s founding, which leads to some really neat stuff about how much history can be distorted, by both time and those who tell it, which is a theme that carries over to Moribito II, as well.

Also, excellent use of foreshadowing. It really helped the ending from feeling like a huge deus the way it did in the anime. The power of re-reading, I guess.

The world is pretty fantastic, and I mean that literally. It’s a really neat fantasy setting, with crab monsters and water spirits and spirit worlds, and it’s very distinct from anything else I’ve read or seen before, even in anime. The kingdoms concerned – New Yogo and Kanbal – are entirely of Uehashi’s invention, I believe, and she does a great job creating a very memorable and fascinating world, with its own mythology and history and traditions.

Though the ending is bittersweet and also a serious SOBFEST, I loved that Moribito concludes with Balsa preparing for her next adventure, rather than, say, angsting about or settling down. Life doesn’t always go the way you feel it should, and the characters, at least, realize that you have to move on. And as much as I like Tanda, I like it more that Balsa’s first priority is to get right with herself. Also, sequel!

I loved Moribito. The writing was initially a thing, but I can get over that, easily, because of how much joy I got out of reading the story. It’s so great to read something good for a change, and it only gets better with Moribito II.

That being said, I also had the benefit of seeing the anime adaptation of this series first, and it’s pretty amazing – an all-time favorite. It takes the book and adapts it very faithfully, but also adds a lot of depth and stretches out the relationship and character development. Also, gorgeous animation. It’s very worth watching, whether you plan on reading the book or not, but if you’re going to do both, I’d advise reading the book and then watching the series. The book is easier to get through more quickly, and the anime actually improves upon that foundation. You can stream the entire thing on Netflix.

So, to sum up:
1. Read this nao.
2. Watch this nao.
3. Love this nao.
4. Buy ALL THE THINGS so Scholastic will start translating more of the books!

Three AND A HALF stars

Tune in tomorrow for Moribito II: Guardian of the Darkness!