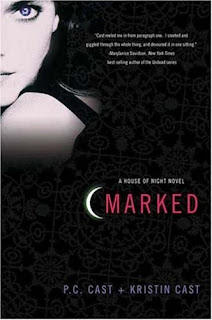 If you weren’t already turned off by the asshole characters and nasty stereotypes, the writing “style” would almost undoubtedly seal the deal, as far as making Marked unreadable. As you might have gathered from reading the thousands of quotes we’ve included in the past two reviews, Zoey’s narration is awful. It’s vapid, cruel, rambling, and full of insipid, pointless asides that do nothing but encourage you to nurture the hate already festering in your heart.

Her body was, well, perfect. She wasn’t thin like the freak girls who puked and starved themselves into what they thought was Paris Hilton chic. (“That’s Hott.” Yeah, okay, whatever, Paris.) This woman’s body was perfect because she was strong, but curvy. And she had great boobs. (I wish I had great boobs.)

“Huh?” I said. Speaking of boobs – I was totally sounding like one. (Boob…hee hee).

FSHHHHHHHFFFFFFF RAEG. Even ignoring the anorexic/”ideal” body comments, this STILL would be an embarassing, terribly-written sentence. “Boobs…hee hee”…? FONLFDSL:SDFLFDSN HOW IS THAT OKAY IN A PUBLISHED NOVEL? AND WHO IS SHE TALKING TO?

And she does this ALL THE TIME, OH GOD, every sentence is like jamming an ice pick into our frontal lobe.

As if the colloquial tone and skull-fucking asides weren’t enough, the shit cherry on top of the shit sundae has to be the obligatory eye-roll-inducing pop culture references and brand-label name-dropping. You’d think that at this point, this would be the least offensive item on the list, and yet each time they whip out a reference, it manages to be just irritating enough to worm its way under your skin, perhaps through the wounds every other awful part of the book has already made.

The series is obsessed with deeming real musicians and celebrities “vampyres” in the House of Night world, which accomplishes absolutely nothing aside from giving it a firm expiration date. Marked was only written four years ago, and yet already it feels dated and old. But of course, it doesn’t matter, because House of Night is not interested in aging well. It’s interested in appealing to the kids today, and they love hearing about those celebrities! Quick, Jake Gyllenhaal. Jake Gyllenhaal. JAKE GYLLENHAAL!

Are we popular yet?

Unsurprisingly, given Zoey’s self-centered narration, there’s little to no showing of anything throughout the story. In fact, most times it doesn’t feel so much like literary prose as it does a story being recounted to you in person by an oxygen-deprived seagull. It’s tell, tell, tell, tell, tell, but we should probably be grateful, considering that the few times Marked even attempts to “show”, it comes in the form of shit like this:

I laughed, and it was amazing! I swear I could see my laughter floating around me like the puffy things you blow off a dandelion, only instead of being white it was birthday-cake-frosting-blue. Wow! Who knew hitting my head and passing out would be so much fun?

Fucking things? “Puffy things?” HOW IS THAT ACCEPTABLE WRITING? Could someone not have LOOKED IT UP, or perhaps found some “imagery” that didn’t involve the word things? RFNKDNFL:KSDNFSBDFOBUGKN!!!LKNFLNFF

THIS BOOK IS BAD AND YOU SHOULD FEEL BAD.

“Actually, word has it that he and Aphrodite used to be hooked up, but I’ve been here for a few months and it’s been over between them at least that long. Here ya go,” she tossed a couple of monologue books at me. “I’m Elizabeth, no last name.”

My face was a question mark.

AHAHAHAHA, no, literally, Zoey’s face is a question mark. We just, we just, whyyyyyy?

Not only are the occasional descriptions bad, but they’re re-used constantly. We vividly remember reading the exact same sequence of events every time Zoey casts a circle (CTRL+X, CTRL+V, easiest writing EVER), and yes, we get that Eric is cute, but the Superman reference, the “Clark Kent curl and blue eyes” description, gets trotted out three freaking times, which is just about EVERY TIME ERIC APPEARS. FIND A NEW DESCRIPTION. Oh, and also, we are not five, Marked, we can remember the “Cherokee word for daughter” without you having to repeat those exact words EVERY TIME SOMEONE SAYS IT, IN EVERY NEW BOOK AUGHALKNDF 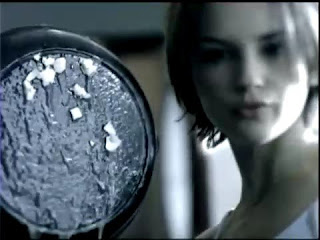 This is your brain on House of Night

The plot is pretty much non-existent: Zoey gets Marked, is special, and has to move to VampireBoardingSchoolTopia. The conflict is inane: Zoey meets popular girl, decides she doesn’t like her, and stages a coup. Nope, sorry, not coup, coup implies planning and strategy and cunning, and none of those things were involved in the making of this plotline.

Really, what actually happens in Marked? Zoey gets Marked, she runs away from home, she falls and hits her head and gets touched by a goddess, she wakes up at the House of Night, she clashes with Aphrodite, her roommate introduces her to a group of friends who immediately love her, she goes to a circle where her powers manifest, she gets invited to a Dark Daughters meeting, she decides she needs to remove Aphrodite from power, but doesn’t know how, so she essentially “prays on it”. Luckily, the page count is running low, so she then attends a Dark Daughters ritual in which Aphrodite stupidly sets her self up for the kill.

Zoey’s one shining moment of action follows, and it’s pretty pathetically anti-climactic: she casts another circle, tells the bad spirits to go away, and they do, because Zoey is special and her powers just do literally whatever the fuck she tells them to. Oh yeah, and then Neferet is just magically and inexplicably there to witness it all and declare Zoey the victor.

Most boring battle EVER.

But seriously, this brings us back to a point we touched on earlier: for being Miss Super-Speshul-Affinity-With-Everything, Zoey is an incredibly inactive heroine. Out of that list of twelve plot-related things that happen throughout the course of the book, how many did Zoey actively contribute to? Like four, maybe, most of which were just making stupid decisions. Her most plot-relevant action is when she decides to follow through on that girl-hate by “deposing Aphrodite”, after which she promptly throws her hands up in surrender because she is so utterly useless that she has no idea how to actually do this. And instead of, say, having her come up with some ingenious idea, the book just lets the rest happen to her.

Zoey expels no effort to achieve her ends. She doesn’t have to learn anything in the way of summoning or controlling her powers – they just manifest and do her bidding. She never practices – casting and uncasting the circle just come naturally. She doesn’t have to try to fit in or make friends – they just fall in her lap and end up being “special” by proxy. And in the end, resolving the conflict is about as challenging for Zoey as bowling with bumper guards.

More importantly, however, the conflict is COMPLETELY IRRELEVANT. Aphrodite’s leadership of the Dark Daughters has absolutely nothing to do with the clusterfuck that follows in the rest of the series, so why are we dwelling on it?

Marked feels like so much catty, unnecessary flab – aside from a little bit of foreshadowing here and there, the book does very little to build up the overarching conflict. In our previous review, we said that it was a world-intro book, and that this made the lack of over-arching plot forgivable, but you know what? No, it doesn’t. Lots of series have proven that it’s absolutely possible to introduce the world while kicking off the plot, so why not use the first book to get the ball rolling?? Why stretch the series out any more than you have to?

LOL DUNNO, but rest assured, stretching shit out is what House of Night does best. It is on book number ten.

It’s probably redundant at this point, but this book is a stinking, vile turd. It offends us in every possible way, and what few interesting things we get out of the world just can’t make up for the pain it inflicts. We’ll keep plugging along with the series review to see if and/or how it improves, but the outlook is grim.

Their entire existence is the constant dispelling of their pigmentation.