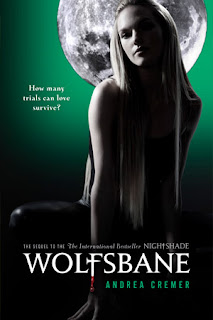 When Calla Tor wakes up in the lair of the Searchers, her sworn enemies, she’s certain her days are numbered. But then the Searchers make her an offer – one that gives her the chance to destroy her former masters and save the pack – and the man – she left behind. Is Ren worth the price of her freedom? And will Shay stand by her side no matter what? Now in control of her own destiny, Calla must figure out which battles are worth fighting and how many trials true love can endure and still survive.

If you read our review of the previous book in this series, Nightshade, you may recall that our conclusion was something along the lines of “could be good, the sequel will probably fix everything that we didn’t like in this one.”

Well, this is going to be a relatively short review, because contrary to our expectations, that…didn’t really happen. Not a whole Hell of a lot has changed in Andrea Cremer’s werewolf epic, so most of our complaints, in terms of character development, are pretty much the same. And unfortunately, as far as plot development and REBELLION go, we really don’t get much of that out of Wolfsbane, either – or at least, not as much as we were hoping for. So, with the considerable lack of progression in the overall plot and characters, we’re mostly left wondering why, exactly, Wolfsbane needed to be a separate book in the first place.

Our biggest problem with Wolfsbane overall is that, again, not a lot happens. With the exception of a rescue mission that takes place in the LAST ACT of the book, the rest of the novel is split between introducing new characters and listening to them talk. Calla gets a few moments of inner turmoil about leaving her old life, but aside from that, it’s mostly talking, and wow, did that really not need to be a whole book. Much of Wolfsbane felt like filler – as though the few actual events it contains couldn’t be squished into Nightshade or Bloodrose, so Cremer ended up having to stretch it out into its own novel.

At least the entire first third of the book is devoted solely to conversations, and the worst part is that most of these conversations aren’t expository. It sounds like a weird thing to complain about, we know, but this was one of those times where we wanted some exposition – where it was not only warranted, but justified. We’re introduced to this whole new world that neither we nor the heroine know anything about, and we want to know more – about the Searchers, about their society and practices. While we do get brief bouts of storytime every now and then – mostly when the plot demands it – and what we learn is interesting, it’s never as much on any of the subjects discussed as we’d like.

Instead, most of the conversations that pad out the first third of Wolfsbane are banter. Truckloads and truckloads of banter meant to establish the characters personalities and relationships, and while that’s all well and good, there’s only so much we can take before our fingers start itching, and our minds start screaming “GET ON WITH IT”. And while we applaud Cremer for, y’know, using conversation to show her character’s personalities rather than just labeling them like most paranormal romances, it tends to make for awkward dialog. The conversations rarely flow or sound natural, because it’s painfully obvious that characters are saying things in order to establish certain aspects of their personalities and lives.

What plot-building we do get in Wolfsbane turns out to be a bit familiar – maybe more like a Croft-ian adventure than a paranormal romance one, but familiar none the less. Expanding on Nighshade‘s revelation that Shay is some sort of prophesied savior from on high, we learn that his destiny as the ~chosen one~ requires him to re-assemble The Elemental Cross (hokiest name ever), a Dismantled MacGuffin/sword that he needs to defeat the Big Bad source of the Keeper’s power, Bosque Mar.

Cliche, yes, but honestly this still would have been kind of awesome if we gotten to see any of it. I mean, you’d think with a premise like that, Cremer would have gone all Indiana Jones on us – after all, the idea is that Shay and Calla are going to have to adventure out to find the pieces of the swords scattered around the world, but alas, that is not the case. Seriously, though, with all this stuff that Nightshade and Wolfsbane have set up to happen that haven’t yet, it looks like Bloodrose is going to have to be action-packed.

Further compounding our disappointment was Calla’s generally stagnated development. Again we were expecting a lot from her here, in terms of evolving as a leader, making her own decisions, and generally becoming the character, the Alpha, that she is supposed to be. Werewolf Moses, goddammit! But it doesn’t happen. What we get is more Nightshade-ish Calla – a confused, unsure girl who follows the leads of others, and still doesn’t really take a huge role in making her own decisions.

For the vast majority of Wolfsbane, Calla just goes with the flow – she follows the Searcher’s leads on mission objectives and timetables, and rarely demands information or explanations or God forbid, proof of anything from them. I mean, who knows? Everything the Searchers tell her, everything they claim to be, could be a lie. Maybe they’re the ones who violate nature. And hey, just because one side opposes a bad one, it doesn’t mean that that side is inherently or completely right – Hell, just look at The Hunger Games and District Thirteen. But does that occur to Calla? Not really. For someone who is supposed to be an Alpha, Calla seems remarkably uninterested in being in on top of things.

And, okay, we just have to say – Calla is dense. Like really, really dense, and we’re not entirely sure if it’s just her character that’s supposed to be dense, or if some of the revelations in Wolfsbane are seriously supposed to be surprises, but she demonstrates some really inexcusable-save-for-plot-convenience obliviousness herye. For example, in the Searcher’s conversations, it is made pretty obvious pretty quickly that Monroe is Ren’s dad. He knows who Ren is, he shows obvious concern for his welfare – going so far as to stage an under-the-table rescue with Calla to retrieve him from the Keeper’s grasp – it is explicitly stated that he had a relationship with Ren’s mother around the time of Ren’s conception, and oh yeah, Ren looks nothing like his father and a lot like Monroe. Furthermore, when Ren refuses to kill Monroe, his pseudo-father Emile flat-out says to him, “Like father, like son,” which OBVIOUSLY doesn’t refer to Emile himself. And yet for SOME reason that we don’t quite understand, despite being present for all of this, Calla doesn’t make the connection until the very end of the book, and only then because a Searcher, Ariadne, explicitly tells her. It’s one of those niggling things that had us face-palming while we read, akin to the density she showed in Nightshade, when she and Shay could not for the life of them figure out that Shay was the sacrifice for her commitment ceremony to Ren, despite similarly blatant indicators. But that was at least understandable as far as the plot went. Here, it just seems like Calla is stupid for the sake of being stupid.

To top off our general disappointment in her, Calla has a truly cringe-worthy moment with Ren towards the end of the book, when she is so horrified with Ren’s actions that she is physically unable to prevent him from almost raping her. Seriously. He has to be stopped by Monroe, of all people. Headdesk. We get being horror-struck and feeling guilty and all, but this girl is supposed to be a strong, capable Alpha werewolf, for God’s sakes, and she can’t even get her shit together long enough to shift or struggle or SOMETHING to defend herself from a mentally deranged Ren? Really?

Speaking of which, to our mild surprise, Shay does little to endear himself to us. We kind of expected him to get more chill with Calla now that Ren is generally out of the picture, and Calla has officially chosen him, but that’s actually not the case. Even ignoring the little jibes he makes against Ren any time the opportunity arises, Shay goes from “somewhat-understandably irritated” to “raging dickweed” when he decides to argue AGAINST Calla going back to Vail to save her pack. The kicker is that, though his argument is based on ensuring Calla and the Searcher’s welfare, his true motivator is jealousy – he doesn’t want Calla to save Ren and risk losing her back to him, so he’s perfectly willing to sacrifice all of Calla’s packmates to make sure that doesn’t happen. After all, “there are casualties in war”. WTF? That’s like, damn near villain-logic right there, and it’s coming from the love interest that we’re supposed to be rooting for? No. Not likely anymore, thanks.

TL;DR we still aren’t impressed with Calla and Shay is still an asshole.

It wasn’t all terrible, though. We did like a few things about Wolfsbane, even if they were mostly the more gruesome aspects of the story, like Cremer’s willingness to torture Calla’s friends and outright kill her mother. But that’s impressive! Not a lot of authors are willing to put their characters through really terrible trauma in the course of the story (tragic pasts don’t count), and we liked that Cremer didn’t go easy on hers. What’s more, Cremer made a point of showing that these were all consequences of Calla’s actions. Even if she wasn’t at fault, even though she made the “right” choice, it still had terrible consequences. It was messy, and that’s unusual for a YA novel.

We also liked the bit that we got to see of the Searcher’s world. Their academy was a nifty idea, even if the elemental motif is a bit tired. The building itself was fun to read about and (kinda) explore from Calla’s POV, and the magical principles are nifty.

Also, holy shit, actual sex! Yay! We loved the fact that Cremer allowed her characters to go there. It’s absurdly rare in a genre where kisses are typically a death sentence. And while Kayla wasn’t wild about who Calla had sex with (she’s Team Ren), she’s still glad that there was sex in the first place.

The twist of having Logan give himself up to them at the end of the final act was also a rather brilliant cliffhanger, and I think the book would have been much stronger for ending there, on a plot thread I was interested in, rather than dragging out more of the tired Calla/Ren love triangle. Once again, Cremer essentially ends her book in what feels like the middle of the first scene of the next one, and it’s both disconcerting and ineffective, at least for me.

Honestly, we kind of had to push ourselves to come up with things to say about Wolfsbane, as you may have noticed. It was just so…much of the same, and so little happened, it felt more like a re-tread than a sequel. So yet again, we’re left in the same position: hoping that Bloodrose will be the kind of Nightshade book that Nightshade and Wolfsbane were not. Except that this time, we’re a bit more concerned that we may be disappointed again.