Home Book Reviews Something Completely Different: My Boyfriend is a Monster #4: Under His Spell by Marie D. Croall 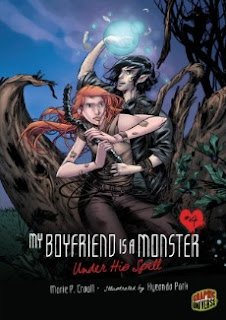 Bethany Farmer’s life is a boring high school routine, and she likes it that way. Soccer, coffee, homework, more coffee, and no goofy romance. That is, until foreign exchange student Allein Atwood shows up in her Midwestern town, and her life turns epically weird. Allein has unearthly good looks, princely politeness, and a bunch of goofy, romantic pick-up lines. But is his country really so foreign that they don’t know anything about soccer? Or coffee?

To her horror, Bethany is swept off her feet by Allein’s spellbinding ways – and then knocked flat by savage creatures set loose into suburbia to hunt Allein down. Suddenly Bethany’s normal town is twisted upside down, and nothing is what it seems. Can Bethany rescue her prince of a boyfriend and keep them both alive long enough to go on a second date?

I’ve generally enjoyed the My Boyfriend is a Monster series. The first, I Love Him to Pieces, was fun and sweet, the second…kinda meh, and though I’m sad to say I missed the chance to read number three – y’know, vampire one – I’m happy to say that Under His Spell, for me, at least, has managed to recapture the fun and sweetness that made I Love Him to Pieces so enjoyable.

This go around, our titular boyfriend is Allein, a Faery Price – yes, literally – hiding out in the mortal world from his eeeeeevil cousin who – as usual – wants to kill him so that he can claim a right to the throne. Fortunately – or unfortunately, perhaps – he decides to hide out in a mortal high school, where he meets our heroine, Bethany. Sparks fly, but like any Muggle who gets involved with a supernatural creature on the run, Bethany becomes a target, and must defend herself and her friends from Allein’s vengeful cousin.

For a fluffy teenage romance series, My Boyfriend is a Monster has a pretty good track record with strong heroines, and this is no exception. Bethany is smart, capable, clear-headed, strong, and brave, even after she starts falling for Allein, which is refreshing, because that’s when most “strong” heroines start losing those kinds of traits. She’s also pretty kick-ass, and the author allows her to be – dare I say it – equal to Allein in terms of competency.

Her first encounter with Allein’s cousin is when he attempts to kidnap her, and much to my pleasure and amazement, that’s a scrape the author allows Bethany to get herself out of, without any assistance at all from the boyfriend. Later in the story, she and Allein go to rescue her friends from the fae, and Bethany informs Allein that she will free the hostages while he takes out his cousin – and she does, getting rid of count em, three fae by herself. Better still, Allein isn’t the type of boyfriend to argue with her and tell her not to even try, “for her own protection”.

Of all the books in the series, Under His Spell seems to be the most aware of the kinds of cliched relationship dynamics that teen romances tend to fall into. Throughout the story, it seems determined to not only subvert them, but point the issues out as well, which made for more than a few psychic high-five moments. For example, right after Bethany is kidnapped, Allein shows up to apologize for what happened to her. When Bethany asks for answers, he pulls the usual “I don’t want to put you in more danger” shit, to which Bethany replies:

Look, I’m not one of those girls who’s going to hang around and wait for you to tell me when everything’s ok.

Obviously you’ve got some stuff going on, but you know who got hurt today? Not me. So if your cousin wants to threaten me ’cause you and I sit next to each other in Chemistry, fine.

Now if you ever want to hang out and get to know each other, you can call me on the phone and ask me out like a regular person, ok?

She stays admirably level-headed throughout the book, even towards the end, when we’re supposed to get a “happy ending”. Instead, we get this:

Allein: I want to be with you. Today, tomorrow, and forever.

Bethany: Omigod. Okay. I am a sixteen-year-old girl. And I have to be honest – I don’t know if I want the same shoes forever, much less the same guy.

Moments like this made me very fond of Bethany’s character. She was a pleasant change from the boy-dependent norm, and the kind of character I wish I read about more often. The only thing that bugged me – and it’s a nit-pick, I’ll admit – was that Bethany was initially presented as a very focused, determined student and athlete who was simply too busy for a boyfriend. But she seemed okay with that. Then we see her go home…and open up a cheesy romance novel she keeps hidden away, quickly becoming all googly-eyed over the content.

SIGH. Because really, no matter how level-headed and focused she seems, deep down every girl just wants a good romance. *headdesk*

Anyway, that aside, I liked Bethany as a heroine, and Allein wasn’t a half-bad love interest, either. There was nothing particularly original about him – as a character, he seemed to be a mash-up of the Noble Savage and the Naive Foreign Exchange Student – but he was cute, and had some genuinely funny moments.

The story, as you can probably tell from the summary, isn’t anything terribly original. Bad guys want to seize the crown, and for pretty poorly-developed reasons, decide to take a detour and hold Allein’s classmates hostage as well. Not, as you’d expect, with the expectation of Allein coming to rescue them. Just to be dicks. but really, if you look at it too closely, not even the premise makes much sense. Allein’s cousin wants to kill him so that he’ll be next in line for the throne, but when Allein returns to Faery to escape pursuit, his father, the King, declares that Allein’s cousin will be severely punished when he returns to Faery because he’s tried to kill Allein.

But, if that were true…wouldn’t he get in even worse trouble for actually killing Allein, thus making his whole plan sort of pointless? I could understand the King’s hands being tied or whatever because the guy is royalty-ish, too, but the King seemed perfectly willing to “punish” him for just trying to kill his son, so…yeah. I dunno, maybe I’m thinking ~too much~ about the fluffy romance graphic novel’s plot.

The premises of the series have never been terribly unique, anyway – at least, not in the ones I’ve read. It’s more about the characters and their likability and experiences, and well, Under His Spell has likable characters in spades. Like I Love Him to Pieces, Under His Spell has this way of making you fond of pretty much every character that gets the opportunity to speak. Even Bethany’s boy-crazy bff garners an unexpected smile once or twice, and Bethany’s parents are just adorable.

Unfortunately, once again, the art is the weak link. It’s an issue that’s plagued the series, and Under His Spell doesn’t see much improvement in that aspect. On the upside, Hyeondo Park’s illustrations have a lovely fluidity that make any panel with flowing hair, cloth, or say, foliage, seem to almost visibly flutter in the breeze. It makes for dynamic, visually pleasing fight scenes, which is definitely a step up from the rest of the other books.

On the downside, those fluid lines extend to limbs – not a good thing, as it makes for some seriously gumby-ish noodle legs every now and then. The character designs are pretty simplistic and amateurish, and faces vary greatly in quality, from serviceable to :-D. And God, what was up with the weird nose line? 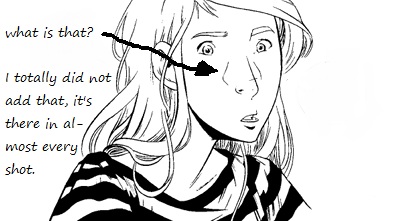 The characters also have a tendency to look a little unintentionally “DURR” sometimes, as you can probably tell.

Still, despite the occasionally goofy artwork, I have to say I ended up really enjoying Under His Spell. If this is indeed that last book in the series – and I really hope it’s not – then I’d say the series went out on a good note.