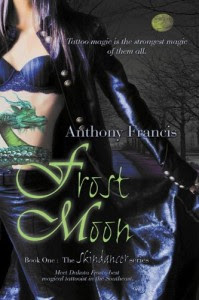 In an alternate Atlanta where magic is practiced openly, where witches sip coffee at local cafes, shapeshifters party at urban clubs, vampires rule the southern night like gangsters, and mysterious creatures command dark caverns beneath the city, Dakota Frost’s talents are coveted by all. She’s the best magical tattooist in the southeast, a Skindancer, able to bring her amazing tats to life. When a serial killer begins stalking Atlanta’s tattooed elite, the police and the Feds seek Dakota’s help. Can she find the killer on the dark fringe of the city’s Edgeworld? Among its powerful outcasts and tortured loners, what kind of enemies and allies will she attract? Will they see her as an invader, as a seducer, as an unexpected champion…or as delicious prey?

FROST MOON is Book One of the SKINDANCER fantasy series by debut author Anthony Francis. Filled with unforgettable characters, spine-tingling action, kinky rebellion and edgy love, FROST MOON is classic storytelling at its best, and Dakota Frost is an irresistible new star of fantasy fiction.

Man, this was one of those books that threw me for a total loop – fifty or so pages into it, I was so thoroughly put off by this book that I wanted to quit. In fact, I did quit for a little while there to read Holly Black’s much better White Cat, but that’s a rant for another time.

Anyway, by the time I dragged myself back to Frost Moon and gave it another ten or so pages to redeem itself, a subplot that was actually interesting wandered through the heroine’s door, and I thought to myself, “Yeah, I can stick around for this.” It was at that point I found myself willingly reading Frost Moon rather than hauling my brain through it at gun point. Perhaps un-coincidently, this was also around the time that our author decided he’d spent enough time proving his characters to be suitably “alternative” and “edgy”, and began to focus on shit that was actually relevant to the plot.

But let’s go back a few ticks there, because while there did eventually come a point at which I enjoyed reading Frost Moon, it took quite a while to get there, and there was some seriously deterrent shit along the way. Frost Moon is the tale of Dakota, a magical tattoo artist who lives in a world where vampires, shapeshifters, and witches are out and proud to the public. They form the “Edgeworld”, a sort of supernatural alternative culture of which Dakota is – somewhat – a member. At the start of the book, Dakota is recruited by her father’s former (police) partner to consult on a murder involving magical tattoos. Which is where the trouble begins.

Within the first oh, I don’t know, two chapters or so, Francis does two things – several times – that irritate the shit out of me. He objectifies his heroine, and he has her objectify every good-looking individual she meets. It’s a consistent, constant thing in the first quarter or so of the book that some guy is appreciating Dakota’s tits or leering at some other part of her body, or hitting on her, or just, y’know, suggesting she get a job as a stripper. At one point her vampire ex puts a collar on her and demands she masturbate in front of her. Creepy. And if that’s not happening, then Dakota is making sexual innuendos or thinking every other guy she meets a sexy beast or calling some chick’s tits lickable or appreciating a shapeshifter whose head is literally that of a deer, or licking random girls’ faces.

It’s hard to explain exactly why this bothered me (well, not that deer thing, that’s just weird) – it’s not like I’m the puritanical type, swooning and crying (in a southern accent) “Oh my stars, this book has sex and this woman has a libido and tattoos, she’s a filthy harlot who must be locked away!” but Christ, for a while there it was like being stuck inside Kim Cattral’s or Captain John Hart’s head.


Then the party really starts, as we’re quickly introduced to our cast, which includes a beastly, homeless werewolf, a Gothic Lolita computer hacker, a seedy vampire gang, an illiterate teenaged catgirl, an FBI investigator/Man in Black, and a Christian lesbian bondage-enthusiast vampire Queen, I shit you not (and I’m not gonna lie, that scene, with the ball gags and the mouth-less leather masks and the human dogs, seriously creeped me out).

What it comes down to is that it feels like Francis is trying way too hard to prove that his world is very pointedly other. And it’s difficult to criticize, because I understand why; this book was written for the people that it’s about – for the members of the subcultures that get demonized or stereotyped or just plain excluded from other urban fantasy series. Once we actually get in to the book, Francis actually does a decent job of portraying the various “abnormal” sub-culture representatives as people – totally non-scary, normal, relatively down-to-earth people. Hell, the eventual villain of the story is probably the most upstanding, so-called “respectable” character in the book.

My problem is that the characterization – especially of Dakota – for the first few chapters of the books go so far in the “other” direction that it makes getting to the good stuff that much more difficult. I didn’t initially enjoy being in Dakota’s head, so I didn’t want to continue. It’s obviously a very subjective issue, but it’s also a big factor in determining whether or not you’ll enjoy Frost Moon.

Story-wise…Frost Moon is a mess. The plot is all over the place, and there are like fifty million things distracting Dakota from the cover conflict at any given time. The overall story consists of three separate primary sub-plots – not counting various character-related subplots – that all pop up at once and, by some law of fiction writing, must be tied together, however implausibly, at the end. The plot progression is strange and meandering, and reminded me of a shoddily-sewn blanket – it was one loose stitch after another, each scene wandering further and further away from the established objective, and just when you begin to wonder if we’re ever going to get back to the important shit, something happens that cinches the narrative back to the blanket that is the overarching plot (yes, it’s a weird analogy, I know). It’s a strangely consistent pattern, like Francis knew exactly how much wandering readers would tolerate before he needed to get things back on track, but it doesn’t stop you from noticing the wandering itself.

I figure it’s a debut author thing, and Francis could definitely benefit from tightening up his stitching. The first thing that needs to go? The step-by-step MapQuest-ish relation of Dakota’s travels throughout Atlanta. Okay, dude, I’m glad that you know your way around your city, but I really don’t need to know which street Dakota turned on to get to this business, or what cross street of which highway her girlfriend lives on, or which district of the city this restaurant she’s visiting is in. Do not care, please get on with it.

The second thing that can go? Extraneous characters. It’s pretty bad when your primary love interest feels extraneous, but Dakota’s FBI suitor (whose name I for the life of me cannot remember) was totally unnecessary. With a few simple tweaks, his role in the story could easily have been filled by Rand (Dakota’s father’s former partner), and their supposed “romance” was so undeveloped as to be almost non-existent. He wasn’t even around to help during the boss fight, which is like the only point of the big tough love interest in a book like this. I have the feeling he’s one of those characters who will become relevant later on in the series, but here, his inclusion amounted to very little.

Honestly…I’m not entirely sure what about Frost Moon I really liked. Perhaps it was the unpredictability? In retrospect, I’m not sure that much about the story kept me reading except my desire to see how it played out, and whodunnit. In that respect, I wasn’t disappointed. I definitely didn’t see the big bad coming, nor did I predict his “how” or “why”, and I definitely didn’t expect that all three subplots (plus one mini-conflict) would end up being the work of the same person. And it wasn’t a terrible ending, even if the only reason it wasn’t predictable was because there wasn’t really any “investigation” aspect to the plot – Dakota wasn’t terribly interested in doing the legwork required to solve the mystery, nor was her FBI beau terribly forthcoming, so when the conflict resolution not only fell in Dakota’s lap, but ended up being Dakota-motivated, I was pretty surprised. I suppose you can call it a cheap resolution since we weren’t really given much information or opportunity to solve the mystery ourselves, but I’m okay with that. Keeps it interesting, at least.

And I’ll admit, I was rather impressed by the way Francis handled Dakota’s mid-story attack, as well as her recovery from it. Lots of fantasy stories tend to gloss over what a brutal physical assault does to someone’s psychological make-up, but Francis’ portrayal seemed both more realistic and enduring than others. Even as the book ended, neither Dakota nor the others involved in the attack had quite gotten over the trauma of it. But they were working together to heal, and I liked that.

Aside from that…well, the conflict itself was a bit of a mess as well. Not only were at least four sub-plots tied up and explained at once, but Dakota only triumphed by virtue of powers she ~magically and conveniently~ discovered immediately prior to storming the Big Bad’s headquarters. Not ten pages later, she’s able to discover even more super-destructive powers she didn’t know she had, once she gets in the down-and-almost-out position that most heroes have to be in before they can stage one final surprise attack and kill the bad guy. Girl is a regular fuckin’ Ichigo.

I was also amused by the bit of magic-babble that Dakota had to go through in her head before she gained that last power, like Francis had to make us understand exactly why, according to the rules of his world, that a) his villain couldn’t predict and prevent her escape, and b) she didn’t just do this earlier. BECAUSE IT’S NOT A MAGIC-CAN-DO-ANYTHING COP-OUT, OKAY?

I also wasn’t terribly fond of the book’s ending with a chapter-long summary of the weeks following the Boss Battle. Francis really struggles to squash in a happy ending for everyone, including a pretty damn big development for Dakota that we get to be told about rather than see. The development is supposed to be sweet and poignant, what with Dakota adopting the teenaged catgirl as her daughter and all, but the squick factor gets exponentially higher when you remember that Dakota met this thirteen-year-old catgirl when she essentially sexually propositioned her, then woke up the next morning to find the girl had followed her home expecting to get laid. Supposedly Dakota couldn’t tell how old the girl was when she licked her face, but it’s still a pretty damn creepy turn-out. Good thing she didn’t have sex with her – it’d make for awkward family dinners.

All in all…I’m just really ambivalent about this book. It wasn’t terribly well-written; it wandered, the narrative style tended towards confusing, and the first fifty pages or so were downright awful. But it got pretty compelling towards the end, I didn’t really hate anything about it, and the intent seemed noble. It’s less of a “don’t read” than a “don’t bother”.

As usual, the review copy was provided by NetGalley.