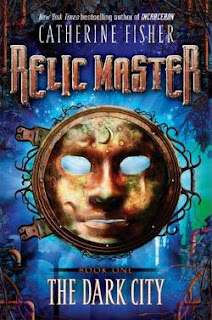 Welcome to Anara, a world mysteriously crumbling to devastation, where nothing is what it seems: Ancient relics emit technologically advanced powers, members of the old Order are hunted by the governing Watch yet revered by the people, and the great energy that connects all seems to also be destroying all. The only hope for the world lies in Galen, a man of the old Order and a Keeper of relics, and his sixteen-year-old apprentice, Raffi. They know of a secret relic with great power that has been hidden for centuries. As they search for it, they will be tested beyond their limits. For there are monsters – some human, some not – that also want the relic’s power and will stop at nothing to get it.

We’re having a really hard time figuring out how we felt about this book. We haven’t reviewed it yet, but we loved Incarceron – the writing was lush and beautiful, and the idea was amazing and unlike anything we’d read before. So we jumped at the chance to get our hands on a copy of the first book in Fisher’s “new” series, Relic Master. And then we read it. And…we got nothing. So much nothing we had to browse Goodreads reviews to see if there was anything we missed, and you know what? It turns out we’re not the only ones who had this problem. Most of the two and three-star reviews found it as blandly-written as we did. Good idea, good story, but no spark, and not very well-executed.

Like Incarceron, the Relic Master series is set in another medieval-dystopian world in which an upper-class authority is trying to control an unwilling poverty-stricken populace. This time around it’s the Watch, a guard-like organization dedicated to the eradication of the Order, a group of magic-workers whose purpose is to keep their religion – and the world of Anara – alive. Also like Incarceron, Dark City is narrated by a group of characters who set out on a sacred journey that could be the key to restoring their world. You see what we mean? The concepts are so similar that for a while there, Cyna honestly wondered if Relic Master was supposed to be some kind of JF prequel series to Incarceron, but apparently that is not the case. We’re tempted to call it a retread, but Fisher published Relic Master in the UK almost ten years before she published Incarceron…so we guess that makes Incarceron the more polished rip-off, eh? At any rate, the setting and overall concept have not only lost a lot of their novelty, but have made Relic Master‘s ultimate twist fairly predictable thanks to the association.

The sad thing is that even though Relic Master was written first, Incarceron was written better. Relic Master‘s narrative lacked a lot of Incarceron‘s urgency and flow, and tended towards blandness and tedium. The writing itself was significantly less…poetic, we guess, but served its purpose as far as creating a unique world and developing complex characters.

Galen, the titular “Relic Master”, was a dick. We didn’t like him at all, but we understood that there were reasons for the dickiness…even if it pissed Kayla off that he was so cruel to Raffi, his faithful apprentice, and was almost respectful to Carys, who he supposedly knew was a traitor, the whole fucking time. Also, a middle-aged guy hanging out with two sixteen-year-olds? Kinda pedo-ish. Still, we enjoyed the darker portrayal of his motivation, a troubling blend of religious and selfish frenzy that drove both his character and the quest.

Raffi was probably the most bland of the main characters – he embodied the dedicated, naive apprentice trope to a T, childish and unwilling to really handle much by himself. Also a bit of a wah-wah. But it wasn’t exactly his fault – Galen kept him on a tight leash, yet seemed to have abandoned his role as “teacher” throughout the course of the book.

Carys we had mixed feelings about.

Kayla: I couldn’t exactly like her – I thought she was weak and two-faced, and I couldn’t believe anything she said, or tell which side she was on. I didn’t like her wishy-washy, save-yourself-type personality. I would’ve respected her more if she chose a side and stuck to it.

Cyna: I liked Carys’ ambiguity. I think I’d have liked her more if she’d been less reliably “good” – all of the moments where she could supposedly have turned on Raffi and Galen were just tedious to me, because it’s a kid’s book, and she’s a good guy, end of story. I actually ended up liking her more at the end of the book, where she separated from Galen and Raffi and declared herself to be “on her own side.”

The only character we really got attached to was the Sekoi. He was funny.

Relic Master also seems like it was written for a younger audience. We were surprised to learn that the main characters were actually sixteen, when they seemed closer to like twelve. The book was also almost totally lacking the kind of sexual awareness you’d expect from hormonally-charged kids at that age, very much abnormally and noticeably so. They were teenagers for Chrissakes, and yet it’s like they didn’t know they had the equipment to bump nasties! Raffi didn’t even notice Carys’ tits or anything!

On the downside, there wasn’t much world development or back story – you’re just sort of dropped in without any explanation, save the brief quotes and excerpts from various in-world books at the start of each chapter, like…well, the ones from Incarceron. We love that particular technique, btw. While Cyna was okay with being kept in the dark and theorizing along the way, Kayla wanted more explanation, more world-building and backstory. We suppose that the reason for the general lack of info is because there are three more books in the series, and this was merely the introduction. After all, towards the end we didgot a little glimpse of the overall conflict, although we had different feelings about that particular twist.

Kayla: I though that it was cheesy and killed the atmosphere. The absurdity of Galen’s seeing a radio as some sort of sacred relic was stupidly hilarious.

Cyna: I loved it. Thanks to Incarceron, I sort of figured it’d turn out that way in the end, and I was jazzed by the possibility. So to find out that Anara was not just a devolution of our civilization and that their religion was most likely a decades-long myth-ified exaggeration of actual events, but that they were quite possibly space colonists was just an explosion of awesome. It was like an old Twilight Zone twist ending. Brilliant.

Anyway, even though there were quite a few things we didn’t exactly…embrace or adore about it, Relic Master wasn’t a terrible read, by any means. The story and concept were strong, and we’re eager to see how it turns out. A lot of the problem is that Dark City suffers from Trilogy Syndrome – or in its case, Quartet Syndrome: it’s all set up, and very little payoff. We’re hoping the next one explains more.

This ARC was provided to us by the publisher, Dial Books. Stay tuned, because we’ve got a surprise for you guys once we hit 100 followers ;D