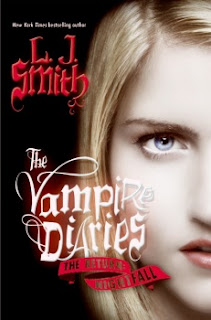 When Elena sacrificed herself to save the two vampire brothers who love her – the handsome, brooding Stefan and the sleek and dangerous Damon – she was consigned to a fate beyond death. Until a powerful supernatural force pulled her back.

Now Elena is not just human. She has powers and gifts that were bestowed on her in the afterlife. What’s more, her blood pulses with an overwhelming and unique force that makes her irresistible to any vampire.

Stefan wants to find a way to keep Elena safe so that they can make a life together. Damon, however, is driven by an insatiable desire for power, and wants Elena to rule as his princess. When Stefan is lured away from Fell’s Church, Damon seizes his chance to convince her that he is the brother she is meant to be with…

But a darkness is infiltrating the town, and Damon, always the hunter, is now the hunted; he becomes the prey of a malevolent creature that can possess him at will, and who desires not just Elena’s blood but her death.

So I finished Vampire Diaries: The Return: Nightfall, which has possibly the longest title in the history of young adult books. Now, I’ve been an LJ Smith fan since I was in middle school, so I was pretty excited when I found out that this had been released (*cough* even though I *just* found this out, as I had long mistaken it for a reprint of one of the first four books.) And even though I’ve never been much of a Vampire Diaries fan, I was excited to find out LJ Smith was publishing new material again, since she’s been on a very, very looooooooooong hiatus and has left us fans kinda high and dry waiting for the end to the Night World series.

Like I said, I’ve never been much for Vampire Diaries. It’s actually probably the lowest on my list of favorite LJ books, ranked slightly higher than Night of the Solstice. The characters were pretty unrelatable to anyone who wasn’t the pretty high school queen, the intrigue was for the most part bewilderingly petty (OMG somebody stole my diary! We must find and PUNISH THEM), and it didn’t strike me as all that realistic. Well, as realistic as a vampire story can be, right? I didn’t really care for Elena as a main character in the originals, because it’s kind of hard to become attached to a bitchy, spoiled, cheerleading, boyfriend-stealing high school ice queen that everyone inexplicably seems to love. And Stefan never impressed me as anything more than the whiny, cliche tortured vampire baby. Damon always struck my fancy, but as a character he’s not much different from Gabriel of Dark Visions, or Julian of Forbidden Game, and both of those series had far more intriguing plots. And it kind of bugged me to think of him falling for Elena. Why? Cause she’s pretty? She’s still kind of a stuck-up superficial bitch, and that doesn’t change much until she dies as a vampire.

At any rate, for what it was, I always thought VD had a reasonably good ending, so the need for a sequel kind of escaped me, but after reading it, I’m thinking it was probably because LJ Smith had a whole bunch of other mythology shit that she wanted to cram it full of. I mean, REALLY. Most books stick to one or two different creatures. Vampires and werewolves, vampires and witches, vampires and shape-shifters, witches and shifters, etc, etc. And if they have more than one race, they introduce them slowly, book by book. The Sookie Stackhouse series is a good example of that. But in one book, LJ Smith manages to use psychics, vampires, angels, spirits, her own weird insect-leech-alienish creatures, and of all things, kitsune. It’s like a mythology blender.

I think the best way to describe it, as a book, is indulgent. It’s like LJ Smith was just writing, thinking “Oooh, this is a cool creature idea! I have no idea how it would fit in the normal plot of the story, but I’ll find a way to write it in!” There was no restraint, no logic applied to the book at all. I mean, the vampire characters in the original series were Italian. The humans were all distinctly All-American. There wasn’t really ever a mention of anything beyond vampires, ghosts, and werewolves in the first four. And now, all the sudden, our main villains are Japanese kitsune? Really? Of all the mythological creatures in all the world, you pick kitsune, which are relatively obscure in American culture.

You’d think, being the anime fan I am, I’d appreciate the Japanese references (and there are lots of them – she even refers to one character as Isa-chan, and her grandmother as Obaasan, and several spout Japanese phrases, she even goes for a pun or two), but I didn’t. Not that the ideas aren’t cool, they just feel really, really out of place. It’s like an LJ Smith fanfiction written by an otaku who was desperate to show people how cool Japanese mythology could be. It wasn’t there for the plot’s sake – the plot was there to accommodate the various ideas LJ seemed compelled to share.

And the pairings. The characters in this book are so wishy-washy and unrealistic, and LJ herself doesn’t seem to know who she wants to end up with who. Elena x Stefan was pushed pretty hard in the original series, but now she’s backtracking, pushing Elena x Damon just as hard, and almost equally Bonnie x Damon, with a hint of Bonnie x Matt, and even Elena x Matt, for God’s sake. And it’d be one thing if the characters actually had some feeling regarding this, but the majority of it occurs without any one of them giving a second thought to the relevance of their actions. Damon wants to save Bonnie, but he doesn’t really give a passing thought as to why. Bonnie continually relies on Damon to save her, but doesn’t consider why he’d do this. Etc, etc. You’re just supposed to accept that this is how it is.

A lot of the plot relies on the convenience of things just ‘happening’, and magic. The magic. The secret magical powers that the characters didn’t realize they had, or magical situations and places the characters didn’t know they were in. Best example? A magical key that can literally open a door to ANYWHERE YOU THINK OF, even different points in time. Even secret prisons that you didn’t know the location of, or even existed in the first place. At one point, Elena actually uses to the key to go to “a place where they can’t see me”, and is transported to just the right place at just the right time. Apparently this world has no rules, no logic. Have a problem? THERE’S A MAGICAL FIX FOR IT. Except for the ones there aren’t. Because if we solved those problems, there’s be no plot. There’s no rhyme or reason, just lazy, lazy writing.

Another problem I had was the maturity level. Not that I mind in general – I’m glad the YA genre, and LJ’s writing style, have evolved so that the characters can do more than have stellar kisses – but here it’s just out of character. Vampire Diaries was a very PG series, and now all the sudden we’re bordering R and Elena’s giving Stefan’s fang a blow job, and Damon’s passing out naked massages and videotaping/choreographing Matt getting hot and heavy with Elena, and adolescent girls are pressing their naked bits on poor Matt, and a pair of twins are acting like lovers? I’m no prude by any means, but this just seems so far from LJ’s usual, and the feel established for this series in the first four books. It’s like having a sex act in a Disney movie. Just out of place and another way the LJ can’t seem to reign herself in.

Perhaps surprisingly, lol, I’m not gonna bitch about one of the most obvious and canonically (is that a word?) inexplicable changes in the series: the fact that the new books are set in a world with present-day technology, even though the first four were set in the early 1990’s, and made no mention of cell phones or computers, much less their day-to-day use. You gotta figure no teenager that this is aimed at would be interested in reading a newly-published book with characters stuck in the ’90’s. So that can be forgiven.

But the rest of this crap…it’s just stuff overload. Too much happens for too little reason and there’s too much convenience. I think LJ’s editor really needs to crack down on her – she’s going overboard. Unrealistic, indulgent books are just no fun to read.

DO YOU HEAR THAT, STEPHENIE MEYER?

Even in light of recent events, I stand by my assessment. This book was a total mess and I don’t have any fond memories of it. That being said, shit or not, it’s LJ’s series goddammit, and if she wants to run it into the ground, she should be able to.