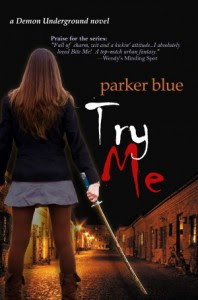 This part-demon teen vampire fighter and her faithful terrier hellhound are once again patrolling the dark streets of San Antonio, Texas. Val’s hunky human partner, Detective Dan Sullivan, is giving her the cold shoulder since she beheaded his vampire fiancee. Vamp leader Alejandro is struggling to keep the peace between vamps, demons and humans. The mucho powerful Encyclopedia Magicka has been stolen, someone in the Demon Underground is poisoning vamps, and Val’s inner lust demon, Lola, is getting very restless since Val’s now partnered with sexy Shade, the shadow demon with the blond good looks of an angel.

These books are beginning to frustrate me. There is so much potential here, and some of the elements Blue introduces in this new installment are really cool. Unfortunately, what could be cool continues to be ruined by what is consistently bad.

For the sake of brevity (and my sanity; honestly I’d just like to get this series over with), we’re going to take a page from Gwen’s book and do this in bullets.

All in all, I’m getting really tired of these books. I have one to go, and while Try Me had some interesting concepts and ideas, the core story and heroine are just not interesting enough to warrant reading the series. Unless Fang Me pulls something pretty spectacular out of its ass, I have a feeling this whole series is going to turn out to be.