Home Book Reviews Something Completely Different: My Boyfriend is a Monster #2: Made for Each Other by Paul D. Storrie 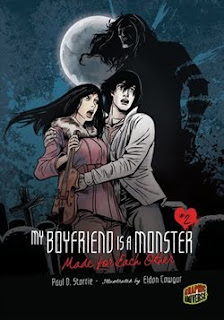 Tom Stone stepped into Seward High and into Maria McBride’s life like a bolt of lightning. He’s the perfect guy for Maria–nice, smart, and well-built. There’s just one problem: his family.

Tom’s father is the town’s new funeral director, and business is booming. The bodies are piling up thick and fast in Persephone Falls, Alaska, so Dr. Stone keeps Tom up late at night working in the funeral home. And it’s clear that Dr. Stone and his creepy assistant, Graves, don’t want Maria around.

Maria knows Tom was made for her. She’s determined to find out what Dr. Stone has against her. When Tom refuses to stand up to his father, Maria begins to stitch together the clues…and finds out that the Stones are into recycling in ways she never could have imagined.

I was pleasantly surprised by the first entry in this series, I Love Him to Pieces, which was the rare light and fluffy zombie love story. So despite the change in authors, I was looking forward to this one. Unfortunately, while being almost precisely the same type of story, Made for Each Other just didn’t make the same kind of so-adorable impression as Love Him to Pieces. In fact, it didn’t really make any impression at all.

I’m actually kinda at a loss to figure out why Love Him to Pieces worked for me and Made for Each Other didn’t. Maybe it’s the subject matter? It’s easy for me to get into a story about zombies, but a story about a girl who falls in love with Frankenstein’s monster’s new monster is bound to come with some (less-familiar) absurdities. Maybe it’s the characters? The heroine Maria and her love interest, Tom, aren’t quite as instantly likable as Dicey and Jack, nor is their relationship as well-explored. And the story, while far more unique than Pieces, just wasn’t as interesting to see played out. With Pieces, I was cheerfully along for the ride; here, I was hardly able to see the forest for the plot holes.

But let’s start from the beginning: Made for Each Other is indeed the story of a teenaged girl falling in love with a Frankenstein monster. I suppose it was only a matter of time. Anyway, in this case, the monster is Tom, a cute but quiet young man newly transferred to Maria’s school in the town of Persephone Falls, Alaska. He and Maria meet and, naturally, fall into insta!love, but Tom is unable to socialize with anyone outside of school due to his obligation to help his father, Franklin Stone, with his work as the local undertaker. One night, Maria makes the mistake of driving down to visit Tom in his home, and accidentally catches a glimpse of his father’s lab, in which a new body is being assembled from the corpses of three recently dead cheerleaders. SURPRISE!

Sounds gruesome, right? But Maria takes it remarkably well, as Tom tells her the story behind his father’s creation (he’s Frankenstein’s monster, and ended up frozen in a block of ice for 200 years in Antarctica after the good doctor died), his own (Stone is in fact a brilliant scientist himself, and was able to recreate and finesse his creator’s trick of bringing the dead back to life), and their motive for being in Persephone Falls (to get more corpses and make more monsters out of them, of course!).

You can see the cheesy in the back story, which puts the book on about the intellectual level of a Scooby-Doo cartoon, but what really got me was Maria’s reaction – she’s totes cool with it. All of it. After all, “It’s kind of like a transplant”, right? And it’s “better than people just rotting in the ground”. I mean, the new creatures are just like test tube babies! LIKE TOTALLY.

And of course, Tom himself isn’t a monster. He’s ~dreamy~.

From there, the conflict is driven by Stone’s cheerleader amalgamation, Hedy. She’s a bad seed, and begins killing random people around town so that Stone will have more material with which to make new monsters. The fact that Hedy is behind the murders would be obvious to anyone with a brain, and at one point Maria does indeed casually suggest that the 300% leap in the mortality rate might have something to do with Hedy’s mysterious “friend-making” expeditions. But Tom politely disagrees, so she drops it.

Eventually Hedy decides that Maria needs to die so that she can have Tom (of course – it’s always about the dick), and the whole thing comes to a head when Maria’s music teacher is taken hostage. Tom gets knocked out rescuing the two of them, then kidnapped, and it’s up to Maria and her rag-tag string quartet to save the day!

It’s not a bad concept, even with the sillier aspects, but it has its share of inconsistencies. For example, Maria and her band save the day by playing music to lull the monsters into a paralytic trance. Yet prior to the mission, Maria’d never actually seen this magic in action. She claims to have deduced this weakness from one of Stone’s monster’s remarks and a statement Tom apparently made off-camera about how he “gets lost” in their music, but this makes no sense, because the first time Tom and Maria meet, it’s while Maria is playing her violin. At that point, he’s able to function well enough to wander into the music room and grab at her, far from the harmless, immobile state the monsters fall into at the end.

Then there’s the outright stupidity – like when Stone’s monster, Graves, takes it upon himself to hint obviously at this weakness by telling Maria when he takes her music teacher hostage: “I want you to come out here. RIGHT NOW. Don’t tell Tom, don’t tell ANYONE, and don’t you DARE bring your violin.”

LOL WELL HAY THAR CAPTAIN STEALTHY! If she didn’t have an inkling about your weakness before, she sure does now!

Anyway, yeah, the whole book is filled with that kind of thick-headedness. There are a few funny moments – like when Tom dramatically rips off his shirt to show Maria his scars and she gets hit in the eye with a button, or when the only thing she’s surprised by in his origin story is his father’s penchant for bad pun names (Franklin Stone, Tom B. Stone), but they’re few and far between, and the characters just don’t have enough personality to make them memorable. It’s completely and utterly blah.

The only area in which Pieces and Made for Each Other can fairly be compared is in the art style. Despite a switch in artists as well as authors, Made for Each Other has the same Archie-comic-type feel as Love Him to Pieces. The character designs are okay on their own, and the cover is nice, but panel-to-panel it’s very simplistic, bordering on ugly. Maybe I’m spoiled by the extravagant, stylistic beauty of manga, but the artwork here just did nothing for me.

All in all, there’s not a single aspect of this graphic novel that’s worth being excited about. The story is uninteresting, the characters are bland, and the artwork is nothing special. All in all, I’d say skip this entry and hope for the best from the next one!

As usual, this review copy was a gift from the gods of netGalley.

The auditory equivalent of a good hot salsa.