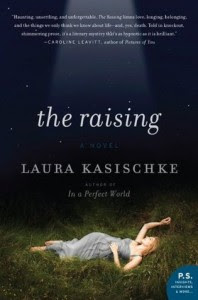 The accident was tragic, yes. Bloody and horrific and claiming the life of a beautiful young sorority girl. NICOLE was a straight A student from a small town. Sweet-tempered, all-American, a fomer Girl Scout, and a virgin. But it was an accident. And that was last year. It’s fall again, a new semester, a fresh start.

CRAIG, who has not been charged with murder, is focusing on his classes, and also on avoiding Nicole’s sorority sisters, who seem to blame him for her death even though the police did not.

PERRY, Craig’s roommate, is working through his own grief (he grew up with Nicole, after all, and had known her since kindergarten) by auditing Professor Polson’s sociology class: Death, Dying, and the Undead.

MIRA has been so busy with her babies – two of them, twins, the most perfect boys you could imagine, but still a nearly impossible amount of work even with Clark’s help – that she can barely keep herself together to teach (Death, Dying and the Undead), let alone write the book she’ll need to publish for tenure.

And SHELLY, who was the first person at the scene of the accident, has given up calling the newspapers to tell them that, despite the “lake of blood” in which they keep reporting the victim was found, the girl Shelly saw that night was not bloody, and not dead.

I’m out of my reviewing comfort zone again. The Raising is Not My Thing, but in a very different way than, say, Evangeline. I’m a genre person, obviously, so fancy books that fall under the heading of plain old “literature” have the potential to go over my head. And maybe that’s what happened with The Raising. Maybe there was this whole other layer to it that rose above the “plot” and spoke about some fundamental aspect of humanity, like the way that piece of abstract art on the wall at the museum looks like some preschooler pasted strips of construction paper on a blank canvas, but actually represents the defiance of a totalitarian regime. Or something. IDK, I’m just a knuckle-dragging paranormal romance reader, and this book was long.

It’s not that it was boring, exactly. It started out compelling enough, and the writing throughout is lovely. The introductory chapter certainly had me hooked, with all its amazing atmosphere and almost cinematic quality that was very easy – and beautiful – to visualize. And the chapters following it were interesting enough, when you’re actually reading them. The trouble was that when I put the book down, I wasn’t all that eager to pick it back up. I had to talk myself into opening it again, because I realized that once you get past the initial introductory phase, the book goes nowhere, very, very slowly.

The first, ohhhh, 250ish pages of this 360-page book are, for the most part, dedicated to two things: character development and setup. The Raising is told from the point of view of four different characters (the ones with the ALL CAPS names in the summary), and shifts between each of their daily lives on a Midwest college campus a few months after the “fatal” car crash that kicks off the novel.

We see the two adult characters, Mira and Shelly, dealing with their jobs and stresses and their unsatisfying personal lives. Meanwhile, the two student characters, Craig and Perry, adjust to their worlds post-accident, and flashback to the halcyon days before it. And that’s kinda it. To say the author takes her time building the plot would be an understatement – I had no idea what the core conflict would be, who or if there was an antagonist, or even what the nature of the damn book was (thriller? drama? supernatural?) until the last hundred pages. I could not have begun to sort out which dramas and side-characters in each protagonist’s life were ultimately relevant to the overall plot, or if there was going to be an actual plot at all. For a while there, I considered that it was simply a slice-of-life look at the way one tragedy could affect four very different people. Perhaps there was no ultimate conflict that would bring them together. In retrospect, I wonder if that wouldn’t have been better.

Because you see, the moment we come within sight of the last hundred pages, Kasischke finally gives us that urgency and direction we’ve been waiting for. Unfortunately, it comes at the cost of the credibility Raising so painstakingly built, and the reality that it grounded itself in with its well-developed, familiar characters, lives, and setting. Once we hit that last-act dash, Kasischke pulls the curtains back to expose the overall plot as that of a conspiracy thriller, complete with premeditated, reputation-ruining scandals, dead cats, faked deaths, exotic drugs, and a high-reaching sorority that will do anything to protect itself. And it’s incredibly dumb, unlikely, and overcomplicated, and just doesn’t work with the kind of book The Raising was for the first 260 pages.

It’s unfortunate that the most gripping part of the book has to be the most disappointing – not only is the answer to the mystery lame shoes, but it all builds up to this moment, this climax where we think, “Finally, we’re going to get some real answers and the fuckers behind all this will be held accountable,” and then BANG. There’s a tragedy, and it stops. We flash forward to fifteen years later, where we catch up with the characters who didn’t needlessly die, and we get a shitty recap explanation of what really happened, and what eventually-like-ten-years-later came of it. I’ll give you a hint: ALMOST NOTHING.

It’s incredibly infuriating. Despite the overly elaborate Master Plan, Kasischke does a very good job of creating animosity between the reader and the conspirators. These people have perpetrated a crime that’s ruined so many lives, including every one of the protagonists’, that you hate them. You don’t actually know them individually, but you still hate the organization. You want to see them exposed, you want to see the protagonists vindicated, you want to see justice served, and it never happens. But not only does it not happen, you don’t even get to see it not happen! You get a summary of what didn’t happen, several years after the fact.

It’s quite possibly one of the most unsatisfying endings ever, and I have no idea what Kasischke was thinking when she wrote it. Maybe it’s part of that whole ~fancy literature~ thing, maybe she’s making a statement that I just didn’t get, but whatever that was, it pretty much ruined the book for me.

The Raising is just…such a strange book. The pacing is terrible for the first three-quarters, but what’s there is interesting enough, if not captivating. The characters are all well-written and believable, and for the most part likable – except for the ones who aren’t supposed to be, and they’re amazingly unlikable. I don’t think I’ve ever wanted to punch a fictional character in the face more than I wanted – and still want – to punch Josey Reilly. She’s eternally on my most-hated list.

Yet the moment it steps into high gear and things finally, finally come to a head, what we’re shown is compelling, but stupid. And yeah, TERRIBLE ENDING.

We got this book as a digital review galley from NetGalley.

Meet us in the Wank Tent.