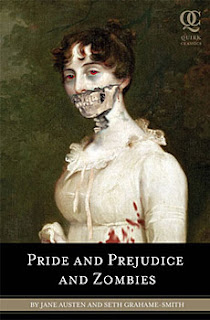 “It is a truth universally acknowledged that a zombie in possession of brains must be in want of more brains.”

So begins Pride and Prejudice and Zombies, an expanded edition of the beloved Jane Austen novel featuring all-new scenes of bone-crunching zombie mayhem. As our story opens, a mysterious plague has fallen upon the quiet English village of Meryton and the dead are returning to life! Feisty heroine Elizabeth Bennet is determined to wipe out the zombie menace, but she’s soon distracted by the arrival of the haughty and arrogant Mr. Darcy.

What ensues is a delightful comedy of manners with plenty of civilized sparring between the two young lovers and even more violent sparring on the blood-soaked battlefield as Elizabeth wages war against hordes of flesh-eating undead.

Can she vanquish the spawn of Satan? And overcome the social prejudices of the class-conscious landed gentry? Complete with romance, heartbreak, swordfights, cannibalism, and thousands of rotting corpses, Pride and Prejudice and Zombies transforms a masterpiece of world literature into something you’d actually want to read.

Originally posted on 13 November 2009.
So I’ve been on a reading kick lately, and I fiiiiiiiiiiiinnnnallly finished Pride and Prejudice and Zombies, after having it for…two and a half months? I don’t know why it took so long to finish it. The concept just rocked my socks, since P&P is my favorite book, and I love zombies. I guess because it was just P&P with new zombie-bits added in, it took off the urgency to finish.

Anyway, despite the promising premise, I gotta admit, I was kind of disappointed. I expected something pretty different. At first, I thought it would be a re-telling of P&P with zombies, not an “expanded edition”, as the summary on the back calls it. But even after realizing that, I was still excited to get into it. And it’s not like it was a total loss, or a total failure. I mean, it’s impossible for me to hate Pride and Prejudice itself. Even in such an altered, silly form, it’s an enjoyable read. I just didn’t really feel like the newly-added zombie-bits actually added that much.

Sure, they changed situations and circumstances, and added a few silly fight scenes, but ultimately it didn’t much alter the story that they told, and I was looking for something more different. A different ending, or a different perspective on a story I love. But crossing out a few words, changing them here and there, adding a few paragraphs every now and then, and inserting a few cheap ball jokes? A bit of a let down ^^; Even the few significant things they did change, like Wickham’s crippling, and Collins’ suicide, were less amusing than they should have been, and really out of place. They didn’t really mesh well with the characters’ personalities and, in Wickham’s case, the canon behavior afterward that Grahame left intact. It just doesn’t really work. If you’re gonna alter certain parts of the story, at least make sure that you can make them work with what you leave in.

Maybe I’m being too harsh. Pride and Prejudice and Zombies is what it set out to be: an “expanded edition”. But ultimately, it left me with the impression of a lazy author. Like, this guy got a really good idea for a book, but didn’t want to write it all himself, so he just edited the original Pride and Prejudice. I think it would have been a lot better if he’d re-written it all from scratch. Kind of a waste ^^;

ETA:
I actually have the opposite situation here than I did with Forest of Hands and Teeth – I remember disliking this much more. I was really disappointed by the lack of integration of the zombies. They were added with all the finesse of a grade-schooler scratching out words in his textbook and replacing them with “dick” and “bitch”. I’m not an Austen purist by any means, but, well, this was lazy. If someone were to ask me if they should read it, I would say “Don’t waste your time – you’d have more fun reading the actual Pride and Prejudice and just inserting your own fantasy zombie fights. They’d probably be better than Grahame’s.”

On the other hand, I could really see this being a fun movie. I bet the comic book is good, too. And I’m quite excited to read Dawn of the Dreadfuls and Dreadfully Ever After, which are what I actually wanted from P&P&Z – a completely new, originally written Austen-zombie mashup.