Home Book Reviews -001: The Forest of Hands and Teeth by Carrie Ryan
So I (Cyna) used to have a Livejournal, and before Kayla and I started blogging together, when I was pissed or confused or happy about a book, I’d post it there. Mostly pissed. I went back today and browsed through a few of them so that I could remember exactly how I felt about this book in particular (to compare opinions with Gwen, who is much smarter than I), and realized that the reviews weren’t as terribly ranty or unstructured as I thought. So I decided to post them here, as negative-number entries, because there are a few popular series we’ve read, but never got around to officially blogging about, and, well, we do have opinions on them. Mostly bad. Especially about Blue Bloods, which we have read (rant to come).

Originally posted to Livejournal on 13 August 2009. 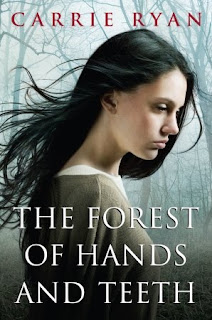 So I started reading The Forest of Hands and Teeth this morning at about 10 AM, and after various interruptions and errands and such, finished at about 1AM. I’ve been wanting to read it for a few months, after noticing the pretty cover in Barnes and Noble, and reading the oh-so-familiar summary:

In Mary’s world, there are simple truths.
The Sisterhood always knows best.
The Guardians will protect and serve.
The Unconsecrated will never relent.
And you must always mind the fence that surrounds the village. The fence that protects the village from the Forest of Hands and Teeth.

I thought “Awesome! Someone took the intriguing premise of The Village, and did it right! And in book form!”

I had no idea when I picked it up that it would be a post7-apocalyptic zombie book, but that was a great surprise. A few pages in and I was like “OMG The Village but with zombies in the forest instead of people dressed like the big bad wolf. EPIC.” Now that I’m finished…well, somehow it managed to be a compelling read despite several pretty major flaws. Like:

a) the main character being a selfish, obsessive, often petty, and continually dissatisfied…well, asshole. Ish.
b) her main man spending the majority of the book being about as reliable as a support beam made of tuna
c) lots of questions being introduced in the first half, perhaps 1/3rd of which actually got answered. And then only vaguely and with logic that doesn’t really hold any water.
d) serious FUCKING meandering. It just went on and on and on and on and on…
e) and maybe this is just me, but a pretty…pretentious writing style. I mean, lady, you’re writing a zombie book. This isn’t War and Peace.

I’m still not entirely sure whether I liked it or not. I mean, I really, really love the idea. I’ve yet to see a book/movie (at least, that I can recall atm) that’s set so long after the zombie apocalypse has taken place (in this book, it’s been about 100 years). I thought it was really interesting to have this kind of isolated world where the zombie problem hasn’t been solved, just adapted to. People go about their daily lives in a fenced-in village living like Amish folk or pilgrims, ignoring the zombies (oh, I’m sorry, the Unconsecrated) on the other side of the fence, because they have to. The thought of curing the disease (or whatever it is) isn’t even considered anymore, they just have learned to deal. I like that. It’s different. And the initial concept – of a discontented girl who dreams of life outside the fences being forced into the conservative all-knowing totalitarian religious Sisterhood who may know more about the world outside the fences than they let on – was, I think, a great one. Lots of intrigue, and the potential for an interesting conspiracy and some good revelations. But then the book gets messy.

I mean really, in the first half they set up all these interesting questions – why the Sisterhood is hiding the girl who traveled into the village from the outside, what they know about how the outbreak started, perhaps why the outbreak started, what kind of experiments they’ve apparently been conducting on people to learn more about the zombi-er, Unconsecrated, and why, and how. But then in the middle of all that, just as our Main Girl Mary is coming onto some answers, WE INTERRUPT THIS STORY TO BRING YOU A BUNCH OF LOVE-DRAMA-DUTY BULLSHIT FOLLOWED BY A ZOMBIE ATTACK THAT DESTROYS THE WHOLE VILLAGE.

I mean, seriously, it’s like the writer had ADD or something and completely forgot to tie up that storyline before she moved on to the next one. I guess you could make the argument that it was ‘realistic’ in that one person in their life might never know all the background information you would need to make a complete story, but it’s unsatisfying. As the reader, I wanted to know what was in the Not-Scripture-Book that apparently chronicled some juicy zombie experimenting. For generations. But no. Instead, Mary wusses out and runs back to her little love-drama.

That particular part of the story had me…a bit put off. Even as Mary was insisting that she was SO IN LOVE with Travis and SO NOT with his brother Harry, I didn’t feel it. There just didn’t feel like there was any sincerity in it. For me, it read like when she was with Travis, she loved Travis, but when she was with Harry, she loved him, even though her internal dialogue during those scenes was pretty much just Oh, Travis, I love you Travis. It felt kinda set-up, like in the end she’d figure out that the one she really, truly loved, was Harry. But that wasn’t the case. She kept pursuing Travis (pretty damn relentlessly and thoughtlessly and pettily), until finally, she got her wish to live peacefully with him for a while, away from everyone else. And even then, I expected her to make a connection with Harry that would lead her back to him. But that never happened, either. Her relationship with Travis just never felt genuine to me. UNTIL the very end.

Of course, it’s possible that it wasn’t meant to, because the real love of Mary’s life was the ocean, and her desire to escape the woods and find freedom, which she pursued even more relentlessly than she did Travis. And really, it was part of why I found Mary sort of unlikable. She literally sacrifices everything: her village, her relationships, even ultimately her family, to fulfill this completely selfish desire. And again, I realize that this was the point, and that it’s acknowledged in the book that this is a selfish and irrational desire, but that doesn’t make it okay. People die one after the other on Mary’s Quest for the Ocean, but not one of them impacts her enough to make her stop, and after a while, you kind of quit buying into it. I mean, her going on this quest by herself is one thing, but when characters start willingly sacrificing themselves to satisfy her selfish need just because they love her, it’s hard to condone the continuation of the quest or like the one leading it. Girl has a pretty damn high body count.

I suppose these conflicting flaws and redeeming traits in the characters makes them more like real people than the stereotypical caricatures you find in most YA books (after all, not everyone’s all good or all bad, and people’s motivations and desires and feelings don’t always lead them to do the right or rational thing), but it’s not much fun to read a book from their POV :/

That being said, there was a lot of emotion in the book that I did like.

I actually found the scene with her mother’s death really heart-wrenching. In fact, one of the things I did today after starting this book this morning was go spend the evening with my own mom, lol. I wanted to hug her and say “Don’t EVER get eaten by and then turned into a zombie, okay?” And as I mentioned earlier, the scene with Travis’ death, where Mary realizes what a heartless, dissatisfied bitch she was, almost made me cry. Which I rarely do with books. That one felt a bit more sincere. I was glad she regretted being so discontent and unappreciative and not realizing that what she had was precious. That part was written really well, and her thoughts about what all she hadn’t bothered to learn about her lover that became so important as he was dying were pretty powerful. And you think for a little bit that she’s going to actually LEARN this time and appreciate what she has, but nope. She’s right back on her Never-ending Quest.

Overall, the book ended up feeling kind of like a marathon. With a very unsatisfying ending. I think after the first half, I was reading it less because I liked/cared about anyone involved or what was happening, and more because I wanted to know how it would end. With a book like this, you’re waiting for this grand ending, because there’s so so so much build up. It’s like, there has to be an epic revelation or great answer (think Planet of the Apes, or Sixth Sense) to make it pay off, to make it mean something, and there really isn’t. It just kind of ends. Granted, there will, apparently, be sequels, but that’s not much consolation. Those will be their own stories, and this will still have a weak ending. And with a weak ending, unlikable characters, and a wandering plot, all there really is to like is the premise, and what could have been.

ETA
In retrospect, while not necessarily harsh on the book, I do remember it quite a bit more fondly than this. Even with the aforementioned issues, I’d recommend it for the atmosphere and the premise, which I hope The Dead-Tossed Waves and The Dark and Hollow Places do more justice to.

Meet us in the Wank Tent.