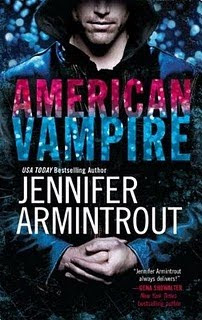 He’s the good kind of vampire. Sort of.

Buried in the Heartland is a town that no one enters or leaves. Graf McDonald somehow becomes its first visitor in more than five years…and he was only looking for a good party. Unfortunately, Penance, Ohio, is not that place. And after having been isolated for so long, they do not like strangers at all.

Jessa’s the only one to even remotely trust him, and she’s desperate for the kind of protection that only a vampire like Graf can provide. Supplies are low, the locals are ornery for a sacrifice and there’s a monster more powerful than Graf lurking in the woods. New men are hard to come by in this lonesome town, and this handsome stranger might be Jessa’s only hope for salvation.

Even if she has to die first…

I guess I stopped really paying attention to the summary after “Heartland”. because I assumed this book would be about a big-city vampire finding love in Small Town USA (and that’s all). As such, I anticipated nothing but pain, so when this book took an early left turn at bizarro monster land, I was pretty thrilled. Boy, is this book different from what I was expecting, and in a very, very good way.

To my delight, American Vampire starts out as far from “paranormal romance” as you can get. I – and apparently netGalley – would classify it as horror, in which the everyman main character just happens to be a vampire. That’s kind of awesome. I mean, it’s nice to read a book involving vampires where the plot doesn’t hang on some character discovering another character they care for is one, or discovering they themselves are unexpectedly supernatural and have a key role to play in some future conflict. Nope, here, the protagonist Graf knows very damn well he’s a vampire, and while there is a period of ignorance for the secondary characters to that fact, when it is revealed, it’s not a plot-stopping event. Er, well it is kind of plot-relevant, but in a more unusual way.

But I’m getting ahead of myself. The protagonist here – I hesitate to say hero because for the vast majority of the book he’s a very reluctant one – is Graf, the quintessential city pretty-boy who also happens to drink blood. On the vampire scale, he’s somewhere around Spike circa Season Four: not a mad, bloodthirsty psychopath, but not a whimpering, angsty vampire with a soul, either. He’s a dick, he doesn’t care much for humans, and he’ll kill them if he has to, but mostly he just wants to party.

Awesome. I have to admit, I really enjoyed Grif (er, I read him as Grif the first time and just stuck with it. The association was too much fun to ignore) as a character. He’s an unabashed lying bastard who will con and kill you if it benefits him, and would probably be the charming bad guy in any other series, but here he makes for a good anti-hero. What’s cool about American Vampire is that we get to see behind the charming facade – thankfully not (well, initially) to the marshmallow underneath, but to the panicky, amusingly self-serving asshole a bit out of his depth.

American Vampire does well putting Grif out of his element, in this situation he can neither understand nor control, with these people he doesn’t get along with but is obligated to by circumstance, in a county with a monster bigger and badder than he is. Grif isn’t accustomed to situations like this, and all he wants to do once he enters the small, appropriately-named town of Penance, Ohio, is get himself out by any means necessary. It may sound kind of weird to say, but it’s nice seeing a vampire grapple with conflict not for some altruistic motive or lover, but for himself. A bit sick of the lovelorn softies.

The plot is pretty interesting, too. As I mentioned earlier, it’s more horror than urban fantasy, which is fine with me. I’m all about horror. So when Grif pulled off the road after getting lost in the middle of nowhere, got cornered in an abandoned gas station being ripped apart by some unknown monster, then wound up in a small town whose inhabitants had been trapped within city limits for five years, I was stoked. Awesome concept, right? This is some Twilight Zone shit right here – we might even get alternate realities or pocket dimensions or evil gods or something!

The heroine Jessa doesn’t come off too shabby, either. She’s the tough-but-damaged type, isolated in her old farm house, made out to be either crazy or a whore by most of the locals, is in a bad relationship with a married man, but still sticks it out. She and Grif don’t get along well at all, and rightly so, considering how he dumps her ass on the side of the road at the start of the novel after escaping from the mysterious monster.

And it gets better, because the inhabitants of this little town have gone into full-on Apocalypse mode. They live off the land, drown their sorrows in homemade moonshine, and require only the slightest provocation or difference to instigate a good ol’fashioned witch burning. They’ve already done in the local Wiccan – vampirism is a death-sentence for sure.

What could go wrong, right? Well, the trouble with great mysteries is that you rarely get a solution that lives up. And the trouble with Harlequin books – even the horror ones – is that you have to endure the inevitable romance, which, in American Vampire, leads to a rather rapid case of Badass Decay.

The book occupies the space of a few days, so any relationship development is going to seem rushed when you stand back and look at it, but by the end of American Vampire, this guy who was perfectly willing to kill this woman if it suited his needs is cuddling her and kissing her head and carrying her around after she gets hurt, and worse yet, she lets him, needs him to, even. After the opening incident of shotgun wielding, we don’t get another one from her. Most of the attacks and conflicts afterwards are handled by Grif, ’cause, you know, once you’ve got a man around to do the heavy lifting, why do it yourself?

And yeah, while entertaining, Grif is an asshole. All I said in praise of his character as a vampire makes him a bit of a shitty relationship prospect, y’know? It would have been much less frustrating if he and Jessa could just have come to some sort of level of mutual respect. Hell, even wearily respectful, end-of-the-world fucking would have been understandable. But no, this is emotion porn, so Grif must fall for Jessa’s grit, and Jessa, totally inconceivably, must fall for Grif, even though she knows he was totally cool with killing her, or running off and leaving her and the whole town to rot, forever forgotten. But no, it always has to be love, even if your protagonist is an entertaining but TERRIBLE potential boyfriend.

Then there are the townsfolk – the more you see of them as a whole, and of their individual members, the more you realize that, while still homicidally on edge, they’re also rather poorly-drawn caricatures of small-town tropes. The rock-steady, hard-nosed bar owner; the fat, suspicious sheriff; the town floozy; the abusive ol’boy ex – they’re all totally superficial and undeveloped, which is a shame, because especially between Jessa, her ex, and his wife (the floozy), there was a lot of potential for a complicated, morally ambiguous relationship. They were lifelong best friends! Jessa dated her ex all through high school. They hooked up behind her back while she was away at college – that should be some complicated shit. But not here. Here, the wife is a jealous, conniving bitch, her husband is a possessive dick unable to let go of what he feels is “his”, and Jessa is a saint in comparison, which I suppose is the point.

And yeah, the plot resolution didn’t do much for me. It wasn’t a total King, and in general there could have been worse explanations, but the reasoning behind it was totally unbelievable. I won’t spoil it, but I just don’t believe that the perpetrator’s motivations were strong enough for him to sacrifice everything that he had to sacrifice. It’s utterly fucking ridiculous that so much pain and suffering could have been caused by a desire for something so frustratingly trivial, and that he would never have said anything about it, even in the beginning when things weren’t so dire.

I also have a difficult time believing that his accomplice could pull off something so….massive, and there was never any explanation of exactly how she came across the powers necessary to pull this off. It’s kind of a huge plot hole.

So all in all, ehhhh, I’m torn. I enjoyed it, even through the love and the sappiness and the dumb plot twists. I enjoyed Grif’s character and his snark and his inner war with himself over his dickish nature and the way he felt about Jessa. Still, I would have liked a little less paranormal romance, a little more horror. But I suppose that’s more of a preference issue.

There was serious missed potential for the human aspect here in the townsfolk, their reactions to the isolation, and Jessa’s complex love square (I suppose King spoils me a bit in that regard). I also wish Jessa’s character could have been more, I dunno, useful, but I didn’t mind her ultimate fate. It could make for a fun sequel.

So I suppose I say

Thanks to netGalley for the review copy!